State of manufacturing establishments in Nepal

This blog post is adapted from Macroeconomic Update, August 2014, Vol.2, No.2.

The Central Bureau of Statistics (CBS) released the findings of National Census of Manufacturing Establishments (NCME) 2011/12 in June 2014. The census is carried out every five years and it covers all manufacturing firms engaging 10 or more persons. 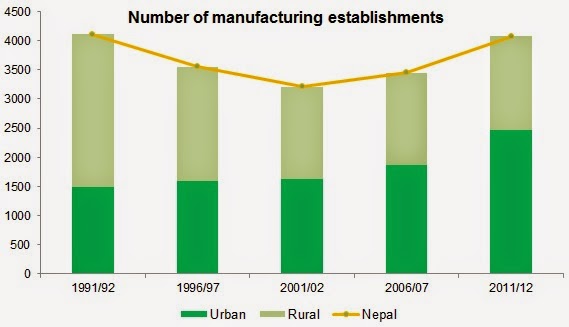 The efficiency of manufacturing establishments in the use of inputs seems to be eroding as evidenced from the increase in inputs as a percentage of output, and a decline in output input ratio. Input as a percentage of output stood at 75 in 2011/12, one percentage point higher than in 2006/07. Similarly, output input ratio was 1.33 in 2011/12, lower than 1.36 in 2006/07. A better measure of the efficiency of the use of inputs is value-added output ratio, which discounts the effect of inflation. Value-added output ratio is consistently decreasing, reaching 0.25 in 2011/12 from 0.37 in 1991/92— indicating that the manufacturing firms are using inputs more inefficiently and are incurring increasing cost of inputs as well. 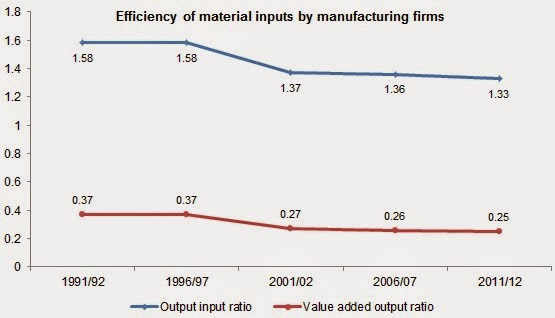 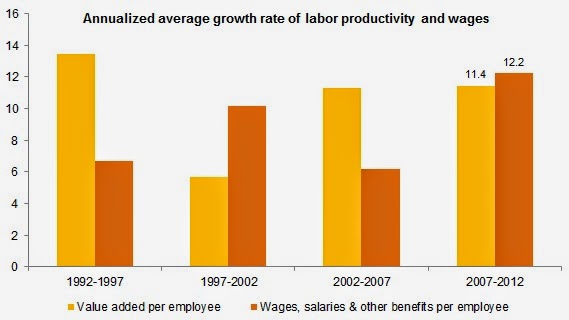 The number of districts with manufacturing establishments has dropped to 64 in 2011/12 from 67 in 2006/07. About 88% of the manufacturing firms are located in 23 districts, with the top five being Rupendehi, Kathmandu, Morang, Sunsari, and Parsa. 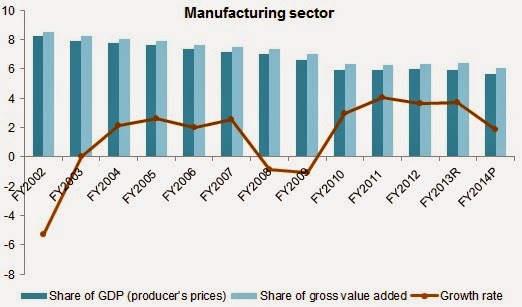 About 40.7% of total manufacturing firms reported that they have not been able to fulfill market demand, primarily due to the underutilization of capital arising from load-shedding, lack of raw materials, labor shortages, lack of finance and lack of skilled manpower. Furthermore, about 84.7% of firms reported that the lack of electricity was having impact on their operations.

Overall, manufacturing sector has been weakening over the past several years. Its share of GDP declined to an estimated 5.6% in FY2014 from 8.2% of GDP in FY2002. The average growth rate has been a mere 3.2% in the last five years.

Posted by Chandan Sapkota at 9:21 PM No comments: