I attended one more discussion forum yesterday. Actually, it was a book launch ceremony organized by the Center for Global Development (CGD). The huge, expensive two volume book “The Political Economy of Economic Growth in Africa, 1960-2000” is written by nine authors, whose profession range from academicians to central bank governors. 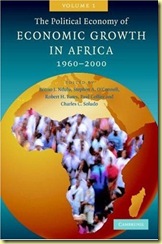 Frankly, the program was boring, not in terms of content but in style of presentation (monotonous style). Also, the book is too expensive (costs more than $250; it is a little less than GDP per capita of a Nepali!).

Anyway, I tried to follow what is unique about this book, apart from the historical background and blame on crisis, political strife, famine….the list goes on and on. Benno J. Ndulu, Governor of Central Bank of Tanzania argued that 1980-2000 was “two decades of lost opportunity” for Africa. Why? I did not get his reasoning for this! I think he was implying that the large countries like Nigeria, DRC, and Sudan are not growing as China and India have done. The growth rate of Sub-Saharan Africa (SSA) was just 0.5% between 1960 and 2004. The developing countries had a growth rate of 2.5%.

He argued that the endowment argument does not explain the variation in growth in Africa. For instance, Zambia and Botswana are both resource-rich and landlocked, and Cote d’Ivoire and Mauritius both have coast and are resource-poor. They have different development paths. Four stuff worth noting from the book:

The other speakers were a bit unclear about the stuff they were presenting. It might be that they were skipping and speeding parts of their presentation in the interest of time. So what does Africa need? One of the speakers said, it needs “four big I”: Investment, Infrastructure, Innovation, and Institutional Capacity. More here

Posted by Chandan Sapkota at 9:29 AM No comments:

Growth Strategies for the Developing Countries

Today I attended a very useful panel discussion on Economic Growth Strategies for Developing Countries in an Era of Global Uncertainty. The discussion focused less on the global uncertainty and more on how to propel growth and policy recommendations based on the experiences of China and India. Particularly amazing was the disagreement between Michael Spence and Lawrence Summers, who argued that the conclusions drawn by Spence and Mohamed A. El-Erian in a paper titled Growth Strategies and Dynamics: Insights from Country Experiences, a working paper series published by the Commission on Growth and Development, is biased towards the unconventional thinking in development economics. 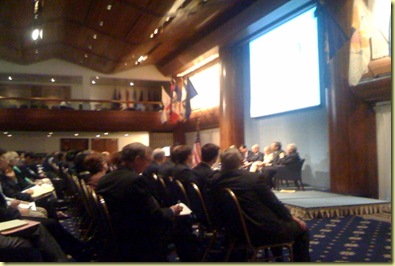 The panel consisted of very well-known economists: Michael Spence (Nobel Laureate in Economics in 2001 and professor at Stanford University), Lawrence Summers (professor of economics at Harvard University), Robert Rubin (director and chairman of executive committee of the Citi Bank), Han Duck-soo (former Prime Minister of South Korea), Danny Leipziger (VP for Poverty Reduction and Economic Management, PREM at the World Bank), and Lael Brainard (VP and director of the Global Economy and Development Program and Chair in International Economics at the Brookings Institution). The event was organized by the Brookings Institution.

Spence presented the main findings of his paper. He argued that the advanced countries’ model of growth strategies is an incomplete guide but not worthless for the developing countries. He was arguing for the gradualism in growth strategies and polices as seen in China and to a lesser extent in India. Experimental approach is needed for successful navigation of growth strategies and policies, again as done by China. He also argued for the effectiveness of government intervention in key areas to bring coordination in economic activity. Governments should engage in vigorous policy debate with a definite end, i.e. policy wrangling is not enough, there should an end to policy debates and concrete action should follow such debate. Moreover, governments should admit and fix mistakes (especially ex-post determined).

He outlined key areas of policy debates with incomplete maps:

Spence was pretty much positive on all the points listed above. He also briefly talked about climate change and argued that we need to reduce per capital CO2 emission by a factor of 2. He was stressing more on the growth model of China and the experimental approaches to policy design. 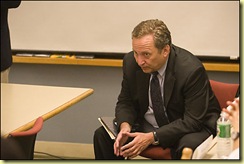 Lawrence Summers was not happy with the conclusion of the paper. He argued that he sensed trouble with three issues: (i) Methodology and policy recommendation, (ii) Cheap shot nature of growth strategies recommendation (not to be quick to pick up Chinese success and advocate its emulation in one or the other form. Remember, how WDR 1979 extolled Romanian growth model, which crumbled few years later...), and (iii) Belief in unconventional approaches...

Larry seems very much discontent with the way Spence recommended unconventional approaches followed by countries like China. He labeled the unconventional approach a “modern mercantilist approach” obsessed with export-led strategy, which Spence favors as a growth strategy in early stages, partly because of the existence of surplus labor in the agricultural sector in the developing countries. As Larry was arguing, the discussion was becoming intense (I think Larry felt he was being pounded hard when other panelist kind of agreed to Spence’s conclusion…Larry was showing strong discontent with the “cheap shot” approach of policy recommendation and the glorification of industrial policy). Anyway, he thinks there are three key problems with the unconventional approach recommended by Spence.

Larry argued that these questions are overlooked by the unconventional approaches, which overemphasize heterodoxy. He is very skeptical of local heterodoxy model followed by China and argued that those who derive quick conclusion on the effectiveness of heterodoxy looking at China are making arguments like Joe Stiglitz does! Larry was pretty much pissed by this time (quite visible from his white-turned-red face in just ten minutes!). Meanwhile, I was wondering why Larry is so pessimistic about import demand. Why does he think that whatever the developing countries produce has to be consumed by the West for the former to grow? South-South trade is already rising up at record level and if businesses concentrate more in serving the bottom billions, then there is huge demand, both domestic and import demand. I wonder why Larry does not consider the bottom billions as potential customers. See here how cell phones are already customized to tap the huge bottom billion market. Larry seems pretty much obsessed with the neoclassical approach, whose steadfast followers have gained little in the past five decades.

After Larry’s fiery discontent, Han Duck-soo came to Spence’s rescue. Being a PM of a country which had followed the unconventional approaches during the early stages of growth, Han argued that the world foreign demand of exportable goods is elastic and there is still scope for export-led growth strategies. He argued that South Korea tried to eliminate widespread distortions in the economy by harmonizing the activities of the private sector through an industrial policy. The businesses were competing with each other in an unhealthy fashion and there were a lot of distortions. All the government did was to reduce coordination failure, minimize information asymmetry, and maximize positive spillover effects in the economy. This is the unconventional approach Larry doubted. But he gave a caveat: there should be strong political leadership and effective government though. Moreover, an industrial policy can differentiate the best sector after looking at the constraints and harmonizing similar activities in the economy. The ingredients of growth are in an economy but not always in a good combination. They need to be harmonized through a good policy package. Spence and Han resonated the arguments usually argued by Rodrik (as far as I know!).

Then Robert Rubin argued that there is nothing wrong with export-led policy in the low income countries. However, the US should cope with the changes in the global economy and focus on distributional and social safety nets in the domestic market. Rubin argued that an effective government is itself an ingredient for growth. Also, he said that a relatively authoritarian government in the early stages of growth has been successful (South Korea, China, Malaysia). The biggest challenge now is: How to promote effective governance with a democratic system?

There was so much stuff going on in there. Unfortunately, I cannot summarize all of them. I will definitely go through the paper in the next couple of days and write a summary. The paper is highly recommended. Also, credit for the first picture goes to my friend Jehea Song, whose company and event pictures from her iphone I always enjoy!

Posted by Chandan Sapkota at 3:45 AM No comments: