Illicit financial outflows from Nepal over 2003-2012

A latest report from Global Financial Integrity (GFI) ranks Nepal 68 out of 145 economies in terms of average annual illicit financial flows— the cross-border movement of money that is illegally earned, transferred, or utilized— over 2003-2012. On an average, from Nepal, between 2003 and 2012, US$755 million was illegally earned, transferred, or utilized.

Illicit financial outflows has drastically reduced lately, largely due to lower import over-invoicing. In 2012, Nepal ranked 102 out of 151 economies, with illicit financial outflow equivalent to US$106 million. Here is an earlier blog post on previous reports. Illicit capital flows are detected by analyzing misinvoicing of external trade transactions and leakages from the balance of payments. 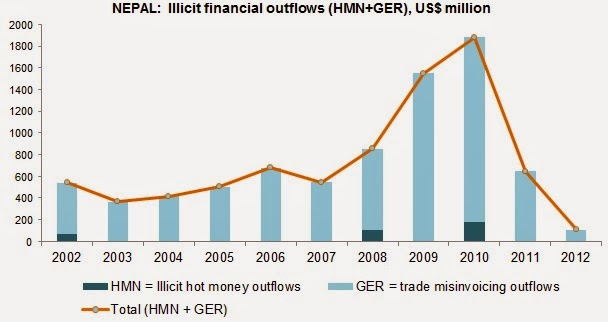 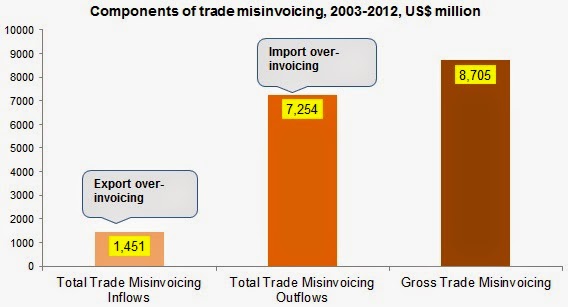 In South Asia, India saw the largest illicit financial outflows, followed by Bangladesh, Pakistan, Sri Lanka, the Maldives, Bhutan, and Nepal. Overall, US$991.2 billion flowed illicitly out of developing and emerging economies in 2012.

Illicit/unrecorded money moves across borders under the following three forms:

Here is how GFI computes the illicit flows:

In analyzing illicit financial flows (IFFs), GFI utilizes sources of data and analytical methodologies that have been used by international institutions, governments, and economists for decades. Basically, these data sources and methodologies are providing information on gaps—gaps in balance of payments data and gaps in trade data. Where recorded sources and uses of funds in balance of payments data do not match, the difference is net errors and omissions, indicating an inflow or outflow that was not recorded. Where bilateral trade data does not match (after adjusting for freight and insurance in the data of the importing country) this indicates re-invoicing of transactions between export from one country and import into another country.

Posted by Chandan Sapkota at 7:19 PM No comments: