Government activism in the US

Here is a brief history, from the WSJ, about activism in the US. (Long story short: The more the depth of market failure, the more longer the hands of the state!) Proof: the sweeping powers to the Fed and other new regulatory establishments due to the subprime housing crisis, bank runs, Fannie Mae and Freddie Mac mess, and symptoms of recession, and a general pessimism over the performance of US markets. Were the virtues of free market overblown?

The end of the Civil War and the completion of the intercontinental railroad helped spur industrialization. Around the 1980s, great industrialists -- including petroleum magnate John D. Rockefeller Sr., left -- dominated the steel, oil and banking industries. Later, outrage among Progressives over J.P. Morgan's role in bailing out markets in the Panic of 1907 led to the creation of the Federal Reserve to handle monetary issues.

During the post-World War I boom of the 1920s, fast economic growth was powered by the expansion of automobiles, home electricity, radio and telephone. The U.S. moved to a dominant position in international trade and global business. President Calvin Coolidge took a hands-off approach to markets.

Turning power over to technocrats has led to disaster on any number of occasions, including the escalation and loss of the war in Vietnam by the "best and the brightest" of the Kennedy and Johnson administrations. Inflation starts to be a problem.

The government took a backseat to the market's needs and desires during much of the tech-powered expansion of the 1990s -- and in the subsequent stock-market bubble of the late 1990s.

A new era of government activism started with the terrorist attacks of Sept. 11, 2001, which led to the nationalization of airport workers and the creation of the elephantine Homeland Security A gency. The Enron and WorldCom scandals dealt a heavy blow to the Reagan revolution of deregulation and smaller government, and the Sarbanes-Oxley law in 2002 subsequently increased regulation and oversight of U.S. companies.

The collapse in the housing market and the battering of financial institutions has required the kind of fast infusion of liquidity that only the Federal Reserve can provide. As a result, expert government technocrats are gaining power across the economy, and the Fed itself has seen the biggest accumulation of power. The depth of the government response will depend on the depth of the crisis.

"There's a backlash against the laissez-faire, 'isn't-it-wonderful-how-creative-markets-are' viewpoint... Markets are creative, but sometimes the creativity leads to strange and dangerous directions."

The American people tend to agree with this view: 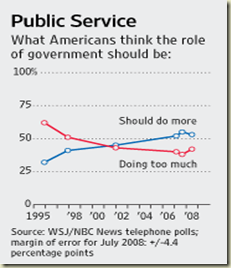 Posted by Chandan Sapkota at 7:55 AM No comments: