This is how Nepal stands in infrastructure rating in the world: out of 134 countries considered in Global Competitiveness Report 2008-2009, Nepal ranks 132. Deficient supply of infrastructure and poor quality of existing ones are the recipes for industrial retardation and slow economic growth rate. The figure below shows infrastructure rating of Asian and Sub-Saharan African nations plotted against GDP per capita of 2006 in constant 2000 US$. 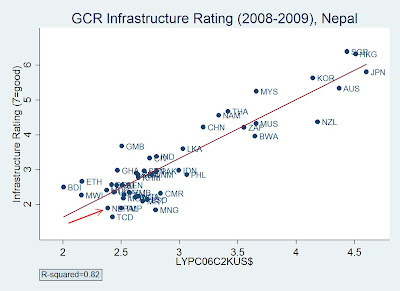 I guess it is not surprising that Nepal is the poorest country in Asia (and twelfth poorest nation in the world) and has the one of the poorest infrastructure ratings (quality and quantity) in the world. The transportation costs (inland + international) is also the highest in South Asia. The transportation costs for textile and clothing industry is the highest in the region and is three times the cost prevailing in India. 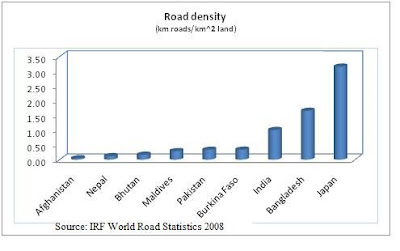 Posted by Chandan Sapkota at 7:52 AM 6 comments: