Cost of load-shedding in Nepal

The country faced a chronic shortage of electricity since 2007, when demand outstripped supply in addition to mismanagement of loads and leakages. For households, it officially ended in 2017 when a new NEA managing director spearheaded an effort to reduce leakages, enhance load management and distributional efficiency, and imported additional electricity from India (on an average, Nepal imports about 45% of total supply from India). In 2018, the NEA said that industrial load-shedding was also over. A 456 MW Upper Tamakoshi hydroelectricity project is due to come online either later this year or early next year. This, in addition to other small and medium scale projects, would help meet demand during the wet season.

An important question that is always asked is about the cost of load-shedding in Nepal. There are enterprises surveys that provide an estimate of the use of diesel-fired generators, which increases cost of production, by firms. But, there isn’t much insight on the potential costs to the economy due to the shortage of electricity. Using a CGE model, a new WB working paper by Timilsina, Sapkota and Steinbuks tries to fill that gap.

Here are the main average nominal estimates (covering 2008-2016) against the baseline: 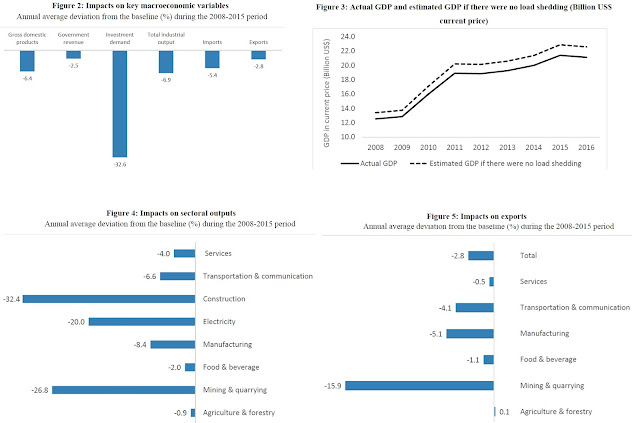 How did they come up with the estimates? They used CGE model to capture economy-wide direct and indirect impact (e.g. load-shedding worsens electricity supply or/and increases input costs of an industry, leading to either lower production or higher price of output). This increase in cost or reduction in output passes on to the wider economy and trade. They use social accounting matrix (SAM) of 2007, which is kind of before the start of load-shedding. Since they cannot disaggregate the effects of household investments (purchasing backup alternatives to load-shedding and using imported fuel in various sectors), the estimates are higher than it would have been. But then it also does not consider the potential effect on output due to lack of investment linked to electricity supply (new investment in agro-processing, construction itself and the multiplier effects they generate). Another caveat is that the estimates are indicative and considers only those that were already connected to the national electricity grid (i.e, whatever population had access to electricity).
Posted by Chandan Sapkota at 6:33 PM No comments: