Nepal’s external sector has remained fairly stable for more than a decade. The current account balance--a measure of the country’s earnings from and expenditure on traded goods and services--has been positive for most of the time despite a weak export performance, thanks to large remittance inflows. Unfortunately, the external situation took an unexpected turn last year: The current account deficit swelled to a level not seen since the fiscal year 1995-96.

The expected large increase in imports along with a widening fiscal deficit (the difference between government revenue and expenditure) has increased the odds of external sector instability. It will deplete foreign exchange reserves and deter foreign direct investment as investors worry about the country’s ability to supply them convertible currency for repatriation of their return on investment. The government faces the delicate task of addressing twin deficits (large fiscal and current account deficits) without reining in productivity-enhancing expenditure and intermediate goods import. 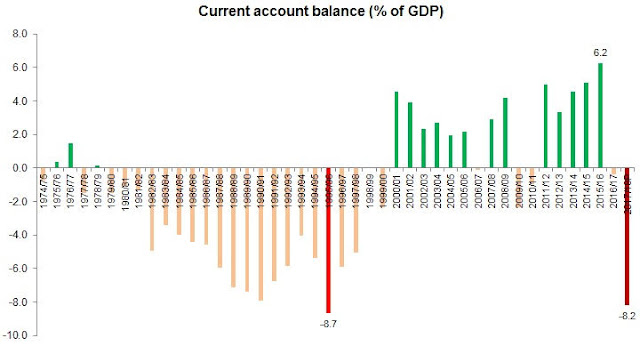 The current account balance includes the value of transactions with other countries in merchandise goods, services, income and transfers. The merchandise trade deficit reached a record 37.7 percent of the GDP owing to stagnating exports (about 3.1 percent of the GDP) but large imports of about 40.8 percent of the GDP. The country’s exports have been suffering from a range of supply-side constraints such as inadequate supply of infrastructure (particularly electricity and road network), labour disputes and political instability, high cost of finance, lack of required human resources and technical know-how, ad hoc non-tariff barriers, and policy implementation paralysis. Recently, two of the major constraints, political instability and supply of electricity, seem to have been taken care of. The other constraints continue to affect industrial output.

Meanwhile, imports of fuel and agricultural and industrial goods have been surging due to increased demand for imported products in the absence of sufficient and competitive domestic production. It widened the trade deficit which is so high that even a surplus in other components (including remittances) of the current account was not enough to balance it. Tourism receipts are meagre compared to its potential, and remittance inflows are moderating due to a decrease in the number of outbound migrant workers.

The government and some economic analysts argue that the high current account deficit is not a bad thing because it will help boost growth in the coming years. Normally, a moderate level of current account deficit due to imports of large machinery and intermediate goods may be beneficial to low-income countries like Nepal. The theoretical logic is that they not only boost current growth prospects but also expand potential growth because the large imports will enable exports to grow in the future and narrow the trade deficit. However, in reality, this is hard to achieve due to the nascent financial market, which normally plays a vital role in efficiently allocating capital, and weak institutional and governance regimes.

Nepal’s current import basket is hardly composed of productivity-enhancing machinery and intermediate goods. Imports of petroleum, the top import item, account for about 11 percent of total imports. The other imported products are used in the industrial sector as raw material or intermediate goods and are either consumed domestically or exported. The issue is that domestic value addition in these industries is low, and the likelihood of a drastic change in the productivity-output landscape anytime soon is also unlikely. The top imported goods have hardly changed in recent years.

The top five imports from India are petroleum products, vehicles and spare parts, MS billet, machinery and parts, and cement. They accounted for 50 percent of total imports from India last year. Note that imports from India make up about 65 percent of total imports. Agricultural items such as rice and vegetables also feature high on the import list from India. From China, we are importing electrical and machinery parts and readymade garments. From the rest of the world, our top imports are gold and silver, aircraft and spare parts, and agricultural products. A government obsessed with revenue mobilisation has no incentive to reduce imports of vehicles and machinery parts because taxes on them are an important source of customs revenue.

Nepal cannot do much to alter the pegged exchange rate with the Indian rupee. However, the government could proactively work to address the supply-side constraints which are forcing companies to operate below their installed capacity and increasing their cost of production. Currently, costly production is not only substituted by competitive imports, but exports are also declining as price competitiveness is eroding despite the competitive advantage from preferential treatment accorded to our exports.

Increasing exports and tourism receipts besides replacing substitutable imports by domestic production is an ideal policy. However, this will be realised only after we take care of the binding supply-side constraints and infrastructural and services related issues in the tourism sector. In addition to implementing timely trade and industry related policies, foreign direct investment should be increased for which the existing laws and the Investment Board Act need to be amended. Until then, the government should advocate a policy to reduce unnecessary public spending and unproductive private sector credit flows that support imports. The large current account deficit right now reflects low domestic savings and high consumption, indicating a reckless fiscal policy and credit flows to unproductive sectors.
Posted by Chandan Sapkota at 11:45 AM 4 comments: