NTY 2011 reviewed: Year of half measures

Year of half measures

Nepal Tourism Year (NTY) 2011 was launched with great fanfare last year. It was one of the rare moments when public, private sector, government and political parties came together for a common cause—to make NTY a success. One of the main targets was to attract one million visitors, of which 40 percent was targeted from India and China. The last time such a mega campaign was launched was in 1998 when around 464,000 tourists visited Nepal, earning US$248 million in revenue. The Nepali tourism industry has come a long way since 6,179 tourists visited Nepal in 1962, followed by introduction of Tourism Master Plan in 1972 and consolidated Tourism Policy in 1995.

As it stands now, though the target to attract a million visitors was not attained, investment and commercial activities did increase in this sector. The target was missed because of the incompetency of our government to launch supportive initiatives, political instability and the sector’s inability to float cost effective innovative packages. Meanwhile, commercial activities increased due to high expectation of increasing revenue, which were not fully met, of stakeholders.

When the NTY campaign was launched, many argued, including yours truly (see Constraints on NTY 2011, Republica, March 14, 2010), that the target was ambitious. It was argued that given the poor state of tourism infrastructure, fickle strikes and political instability, insecurity, uncompetitive products and lack of innovation, the target won’t be realized. Furthermore, the suggestion was to focus on making our tourism products competitive and increasing expenditure per visitor. After all, the purpose of NTY was, along with the high flow of tourists, to generate revenue, support more jobs and create investment opportunities. The worrisome fact is that even after completion of the campaign, these constraints remain unaddressed.

Before elaborating on these, let us look at the state of tourism sector in 2011.Though the total number of visitors via land is yet to be compiled, preliminary estimates show that it will be around 750,000, including 544,185 via air. In 2010, the total visitors (both via air and land) were around 603,000. It means approximately 24 percent growth of visitors—a significant achievement in itself. Though the goal to bring in 40 percent of total visitors from our neighbors was not attained, there nevertheless was an increase in the flow of tourists from these countries. About 145,338 Indian and 45,400 Chinese tourists visited Nepal via air last year. The visitors from almost all the traditional source countries, except Bangladesh, increased between 2011 and 2010. The largest growth in tourist inflows was from China (77.6 percent) and India (39.1 percent). The highest number of visitors via air was from India (26.7 percent of total visitors), followed by China (8.33 percent), USA, the UK, France, Japan and Germany. 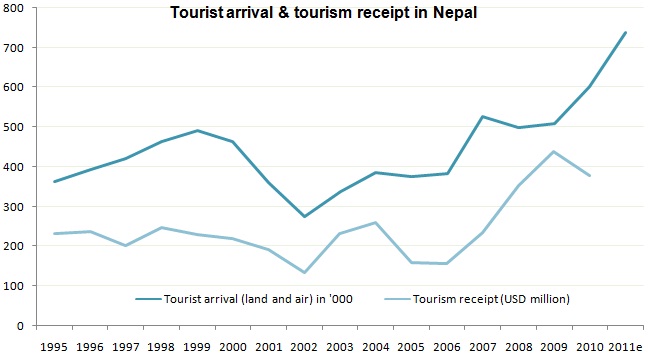 The preliminary figures and tourism promotion initiatives carried out in 2011 reaffirm the point that along with the ambitious target, the priorities and strategies were misplaced, and necessary legwork for promotional strategies in major destinations were not carried out. Notably, the constraints that were restraining the tourism industry to realize its full potential are still not addressed, making our tourism industry uncompetitive. It affects both potential tourist inflows and revenue generation, which was around 2.4 percent of GDP in 2010 (a decline from 5.1 percent of GDP in 1998). Note that Nepal ranks 112 out of 139 economies in the latest Travel & Tourism Competitiveness Index (TTCI).

First, as always, the political parties failed to keep their promises to spare tourism from the fallout of their selfish and endless bickering, which often spilled over to this industry and on to the streets. Just days after the written commitment to let tourism industry function smoothly and to refrain from organizing strikes, the disgruntled political supporters of UCPN (M) took to the street and imposed banda. Though the frequency of banda is relatively low since then, it nevertheless is imposed intermittently, which is tarnishing the intended good image of Nepal as a secure tourist destination. The picture of tourists dragging their suitcases up to the airport gave a negative impression of a fluid political and security situation. In terms of safety and security in tourism industry, Nepal ranks 127 out of 139 economies.

Second, labor disputes and excessive unionism demoralized tourism entrepreneurs. The incessant demand for wage and compensation revision took a nasty turn when one after another union forced closure of several hotels and restaurants, vandalized assets, obstructed management from taking managerial decisions, and harassed investors. At times, guests were compelled to seek alternative arrangements for accommodation and food as a result of abrupt shut down of hotels and restaurants. It made visitors wary of their security and forced them to cut short planned stay, which also means less revenue.

Third, tourism infrastructure was hardly enhanced by the government. The private sector did its part by investing in construction of additional rooms, dining spaces and recreation activities. But, this was not matched by government initiatives. No new airport was constructed and there was hardly any improvement in the condition of and services in existing airports. Also, while many international airlines added new and more flights to Kathmandu, Nepal Airlines Corporation continued to incur losses and failed to add new aircrafts. In terms of tourism infrastructure (including hotel rooms) and ground transport, Nepal ranks 130 and 135, respectively, out of 139 economies in TTCI 2011.

The government did not even provide enough funds to regional tourism chapters to launch street festivals and promotional campaigns. The coordinator of NTY 2011 Coordination Committee—Western Nepal, Biplab Poudel, argues that it provided just 0.7 million of 16 million requested for such purposes in Pokhara. In fact, Restaurant and Bar Association of Nepal (REBAN), Pokhara chapter had to institutionally foot the bill of such activities.

Additionally, Nepal Tourism Board (NTB) started putting up hoarding boards and advertisement inside the country instead of adequately doing so abroad, mainly in India and China—our main source of visitors. It was only in November that the NTB began advertising NTY on CNN and BBC. Partly, the delay in launching time sensitive promotional schemes was caused by the requirement for the NTB to adhere to the government’s procurement act, which is unnecessarily cumbersome and lengthy. But, still some of its priorities and activities were misplaced. Tourism entrepreneurs wondered if the focus was on foreign visitors or domestic tourism. The Indian and Chinese economies are growing at impressive rates and so is per capita income of their citizens, who are increasingly traveling abroad for cultural as well as recreational purposes. We should be targeting them more than trying to attract budget tourists, who are highly sensitive to exchange rate and price fluctuations, from other countries. The Lakeside tourism entrepreneurs argue that more than Nepali vacationers, it is foreign tourists who bargain over room rate, food prices and services. For instance, Baibhav Poudel, executive director of Byanjan Grill, maintains that the biggest spenders in his restaurant are domestic tourists. This view is echoed by other tourism entrepreneurs, who also feel that the NTY’s priorities were misplaced and it failed to meet expectations.

Fourth, apart from investing more in rooms and redesigned restaurants, the tourism entrepreneurs failed to provide attractive and innovative packages to visitors. The accommodation, services and food are as expensive as in most of our competitors in the international market. They expected more out of NTY but failed to play their own part in making the industry attractive to foreigners.

Overall, it is an achievement that more tourists visited Nepal last year. But, the target was not met due to the inability of political parties to honor their commitments, the government’s half-hearted initiatives to promote this sector, and the private sector’s inability to offer cost competitive innovative packages. There was more noise about NTY, for which the government allocated 380 million, inside than outside of Nepal.