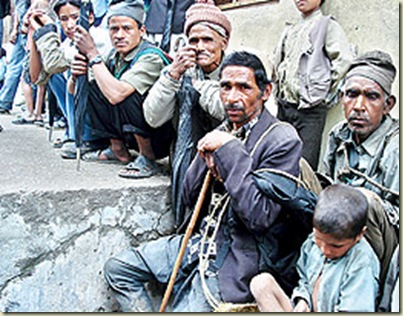 Famine-hit people from Sappata village in Bajura district who came to the Nepal Food Corporation depot at Kolti in the district Sunday in search for rice look dejected after the depot stocks ran out before their turn came. Thousands of people in 11 VDCs in northern Bajura are facing food shortage. (Source: The Kathmandu Post)

Many rural areas which are not connected with vital infrastructures for development, including roads, are facing severe food shortages. These are the same regions where incidence of poverty is also the highest. The people depend on subsidized food supply from the state and aid agencies like the WFP.

More here. Rising food prices coupled with short supply, famine, and rising fuel prices have been crippling food supply in the remote areas. Earlier, the WFP predicted that one-third of the population (about 10 million) would starve if similar situation persist long. The WFP needs more aid and funds to effectively reach these people. Where is all the donor money going or are the donors becoming stingy this year?

The acute food crisis has been looming in at least 11 VDCs in north-eastern Bajura district, leaving thousands of villagers in a state of famine.

Thousands of locals gathered at Kolti food depot for foodgrains. However, some 6,000 quintal foodgrain that the depot received had already been distributed.

And this is very sad for the people who are not only poor but chronic poor:

"Ultimately we will have to die since there is no food in the depot and our meager production has already finished," said Rana BK, a local from Sapta village.  Dhansure BK of Sapta-9, who reached the Kolti depot for food, said, "I am not sure whether my children will be alive when I return home with food."

A local NGO distributed 40 kilograms of rice one month ago under the aegis of World Food Program. However, the people have almost finished up that small quantity of food stuff by now.

Some three weeks ago, hundreds of women had gathered at the District Development Committee (DDC) and threatened to commit suicide consuming poison en masse unless they were provided food at the earliest.

But the political parties settled such a grave issue by providing just 25,000 rupees as relief amount to each VDCs.  Similarly, the remote Kalikot district has also witnessed food scarcity.

There is a shortage of foodgrain in the north-west Patala area in the district. Locals said that the damage to crops from hailstone in April was the major cause of the looming food crisis in the area.

Political response to solve this problem has been so-so. The leaders too busy bickering on restructuring the state at a time when one-third of the population is going hungry. But, what more can we expect from a virtually bankrupt state? The donors( World Bank, IMF, WFO, UNDP, FAO) should release more immediate funds to tackle this problem. Starvation and hunger is going to wash away the progress Nepal made in poverty reduction in the last decade.

The Chronic Poverty Research Center is publishing the Chronic Poverty Report 2008-09 tomorrow. Earlier version of the report had focused on identifying five main traps that underpin chronic poverty- insecurity, limited citizenship, spatial disadvantage, social discrimination and poor work opportunities and outlined key policy responses to these traps. This new report focuses on the possible solutions to the traps. Here is a piece about what to expect in the report:

We argue that the development of a ‘just social compact’ between citizens and states must be the focus for poverty eradication. Development actors can nurture such a compact through social protection, public services, effective anti-discrimination action, gender empowerment, economic growth and fiscal policy, and the management of migration and urbanisation processes.

To show the human face behind the statistics and policies, we intertwine the life stories of seven chronically poor people from across Asia and Africa into the report. The descriptions of the lives of Angel, Moses, Txab, Vuyiswa, Bakyt, and Maymana and Mofizul, help the reader to better appreciate the complex and varied causes of chronic poverty.

Most people in chronic poverty strive and work to improve their livelihoods, and to create a better future for their children, in difficult circumstances. They need real commitment matched by actions and resources, to support their efforts and overcome the obstacles that trap them in poverty.

We argue that tackling chronic poverty is the global priority of our time and that eradicating poverty by 2025 is a feasible goal – if national governments and international organisations are willing to make the necessary political commitments and resource allocations.

It is our hope that this report will inspire deeper reflection on how to tackle chronic poverty effectively and – most of all – will stimulate action to make it happen.

Here is more from ODI blog:

The new Chronic Poverty Report asserts that better social contracts can be moulded. It stresses that economic growth is critical. Growth lifts people out of poverty, and provide the revenues to invest in human development, including such services as health, education, water and sanitation that are critical to interrupting inter-generational poverty, and enable the poorest  to participate more effectively in the global economy. Such revenues enable states to invest in social protection – critical to address the livelihood insecurity trap, but also to address discrimination, as Mexico’s Progresa (now ‘Opportunidades’) scheme has shown. Supporting the world’s most fragile states to develop better social contracts is at least as worthy a focus for the international community as climate change.

Note that chronic poverty is slightly different from poverty (informally, the former is a sub-set of the latter). The chronic poor are those who experience significant depravation over many years and/or whose depravation is inter-generational (duration is important). Here is more.

Posted by Chandan Sapkota at 6:35 AM No comments: