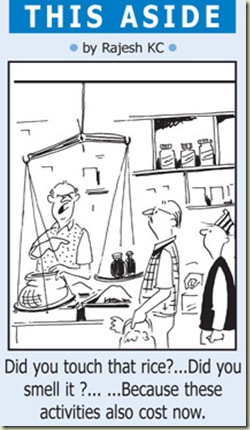 Posted by Chandan Sapkota at 11:41 PM No comments:

The future of SAFTA

Ever since the South Asian Free Trade Agreement (SAFTA) was launched (though in bits and pieces), there has not been a substantial change in trade flows among the member countries. It is interesting to see that people are still optimistic about SAFTA and think that it makes "economic sense," according to a survey conducted by ADB and UNCTAD. Of course, any FTA would make economic sense, provided that there are gains for all or gains outweighs loses.

“Our analysis shows that the situation of product complementarity has improved in the region, and that SAFTA has the potential to boost intra-regional trade by 120 percent from the present level with sufficient development impact,” said Abhijit Das, deputy coordinator of UNCTAD, one of the two agencies conducting the study.

The major highlights of the report suggest that Nepal will not gain additional market access in India under SAFTA, but it will expand its market access in Bangladesh and Maldives by 52 percent and in Pakistan and Sri Lanka by 46 percent when SAFTA is fully implemented.

“Bangladesh's welfare gains will be the highest in South Asia, and the country could do well in areas like apparel, pharmaceuticals, plastics and ceramics,” says the report. India will witness export gains in automobiles and a few other manufacturing products.

Pakistan will record a twofold growth in its exports in the region and see positive impacts on employment in the agricultural sector. But it could lose on commodities like apparel, leather products and sugar, says the report.

The study has estimated that full implementation of SAFTA could cause Nepal to lose revenue amounting to about US$ 0.1 billion (on the basis of simple and weighted average tariff).

The study has also noted that regional trade largely suffers from barriers apart from tariffs. Removal of non-tariff barriers and political constraints alone could cause intra-regional trade to rise by a further 40 percent, it estimates.

What I don't understand is why is there such a rush in enacting FTA in South Asia if it is already crystal clear that poor infrastructure, poor access to credit, clear disadvantage for some countries in terms of revenue generation, capital market and current account volatility, exchange rate uncertainty, etc. are bottlenecks to realizing the fruits of free trade. I see no reason why Nepal should be so excited about this trade agreement at a time when it is not even able to exploit business opportunities in the bordering Indian states.

Posted by Chandan Sapkota at 11:35 PM No comments: