Infrastructure and education are key to unleashing entrepreneurship

Ghani, Kerr and O’Connell argue it is entrepreneurs who create jobs and there is a “strong link between initial levels of young and small firms and subsequent job growth”. They maintain that even though there are not enough entrepreneurs in India (and other South Asian countries) for its stage of development, cities and states that have embraced entrepreneurship have created more jobs than those that have not. So, entrepreneurs create jobs. But, what creates or attracts them? Its physical infrastructure and an educated workforce. It is especially true for manufacturing and services sectors. The authors argue that “supportive industrial structure for input and output markets are strongly linked to higher entrepreneurship rates”.

The authors define entrepreneurship as the presence of young establishments, less than three years old, in the formal manufacturing sector. There area also other characteristics of entrepreneurship such as self-employment, firm size, ownership, entry and innovation. 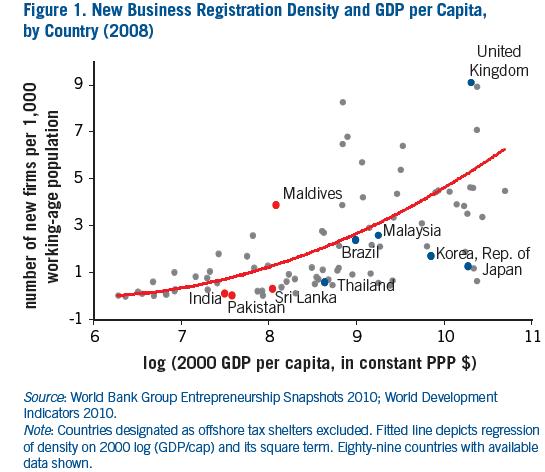 Some of the findings are:

Posted by Chandan Sapkota at 11:26 PM No comments: