FDI inflows to Nepal was the second lowest in South Asia in 2010. It received approximately US$39 million last year. The highest recipient was India with US$ 24 billion and the lowest Bhutan with US$ 11.69 million. The total FDI inflows in the world was US$ 124.37 billion, to developing countries US$ 573.57 billion, and to South Asia US$ 31.95 billion (South Asia excluding India received US$ 7.3 billion of which approx 30 percent went to Pakistan). 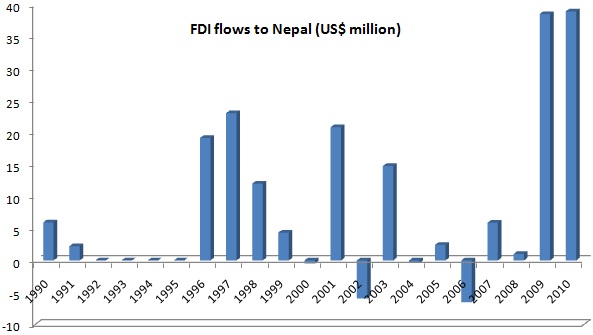 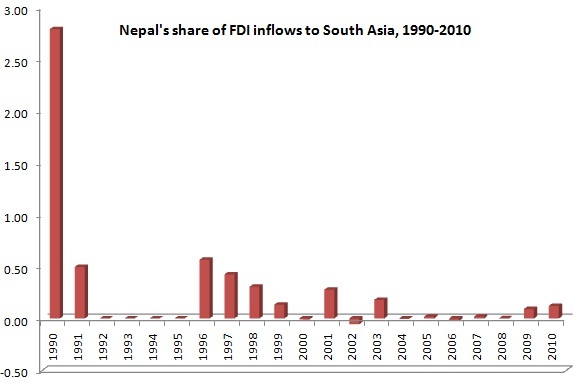 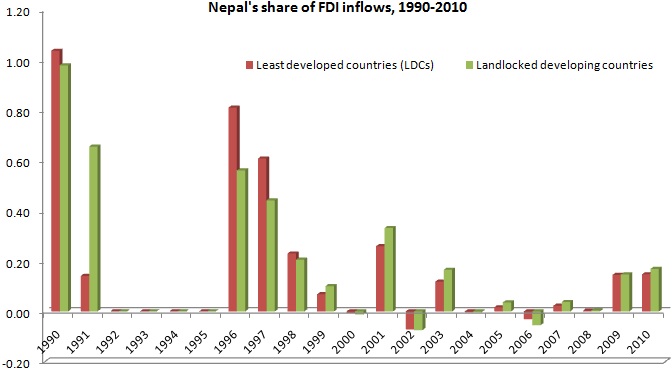 Persistent labor problems, power outages, political instability, cumbersome regulations and tax regime (leading to high transaction costs), corruption, and lack of adequate infrastructure (leading to high transportation costs), among others factors, are impacting FDI inflows to Nepal. Here is a blog post I wrote in 2009 about FDI policy and investment climate in Nepal. According to Enterprise Survey 2009, 62 percent of enterprises think instability is the biggest constraint. Here is a report on FDI investment opportunities in Nepal. There are plenty of opportunities for FDI in agriculture and agro-based industries, flowers and flowering plants, Pashmina, garments, tourism, health, education, IT, nursing homes, construction, hydropower and alternative energy sources, and manufacturing, among other sectors.

[All data are sourced from the latest UNTCAD’s World Investment Report 2011. Here is a WIR’s FDI profile of Nepal].