This blog post is adapted from the issue focus of the ADB’s latest Macroeconomic Update (April 2013).

In addition to the declining capital budget allocation in recent years, the actual capital expenditure itself is consistently lower than the budgeted amount (Figure 1). The struggle and consistent inability to spend on time the allocated capital budget has put the issues surrounding the quality of spending on the backburner. For a developing country with tremendous need to scale up infrastructure investments to tackle head-on the binding constraints to accelerated economic activities, reduced as well as underspent capital budget is a cause of concern. ‘Crowding in’ of private investments has not happened due to the failure to ensure adequate physical prerequisites, including infrastructure. Consequently, it is not only having an impact on productivity, but is also suppressing economic growth and jobs creation below the potential. Scaling up both quantum and quality of capital spending is vital to creating the foundations for the lackluster growth to take off on sustainable path. 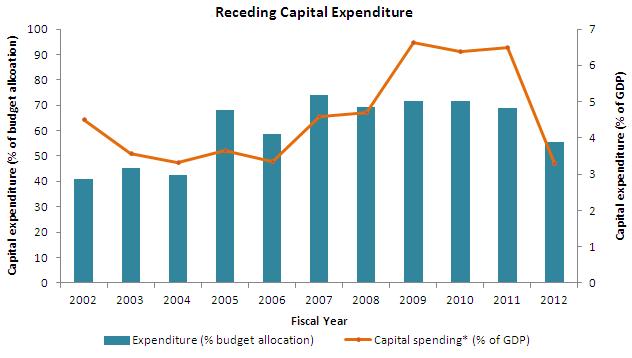 Source: ADB estimates based on data from Ministry of Finance

According to the line-wise budget headings for FY2013, capital expenditure consists of expenditure for the acquisition of fixed assets, including land acquisition, purchase and construction of building, furniture and fixtures, vehicles, machinery, public construction, capital improvement, and research and consultancy related to capital. Compared to the level of expenditure in the first six months of FY2012, expenditure in all of these headings except for capital formation, and research and consultancy declined in the corresponding period in FY2013 (Figure 3).[2] In the first six months of FY2013, capital expenditure was the highest in public construction (Rs 5.9 billion), followed by building construction, research and consultancy, capital improvements and land acquisition, among others. Capital spending usually starts to pick up beginning mid-year and then accelerates in the last trimester. Unfortunately, on top of low capital budget this fiscal year, expenditure has failed to pick up thus far. Even more worrisome is the indication that expenditure under public construction (roads, bridges, airports and other productive assets), which registered a negative growth of 16.6% in the first half of FY2013, is not going to pick up as expected. 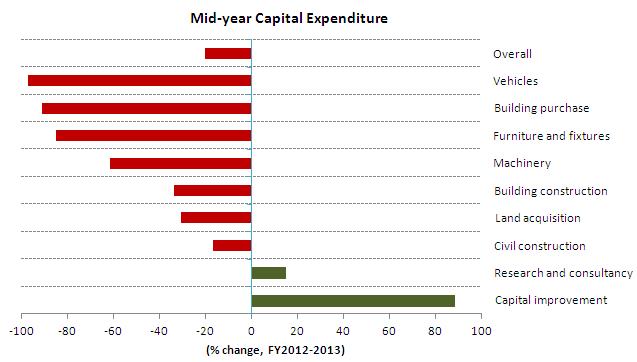 The lack of a timely full budget has been the main factor behind the low and ineffective capital expenditure. In FY2012, the delay in unveiling a full budget led to a dismal capital expenditure (about 3.3% of GDP, down from about 6.5% in FY2011). Worse, the delayed full budget for FY2013 has created shortage of funds in many development projects, including those funded by development partners. The projects supported by ADB alone are facing budget constraints of about Rs 17 billion.[3] As a result, disbursements of all donor-funded projects have been low. This will delay the completion of several development projects and programs. The procedural delays in requesting authorization for release of funds and the cumbersome procurement processes have further delayed capital spending. It is very likely that actual capital expenditure in FY2013 might be below 3.0% of GDP, which is lower than the level reached in FY2012.

The inability to ramp up capital spending is affecting the financial sector as well. On a cash basis, the government was running a surplus of about Rs 44 billion in the first six months of FY2013. The inability of the government to spend money, which usually flows via the banks and financial institutions, on time is also contributing to liquidity constraints. Consequently, the interbank lending rate is gradually increasing and reached 2.3% in the seventh month of FY2013, from 0.5% in the first month (Figure 17). Additionally, public capital expenditure dependent sectors (Figure 24) such as construction are not expected to pick up this year as well from a negative growth last year.[4] It not only affects employment creation, but also revenue mobilization, overall economic growth rate, and poverty reduction. 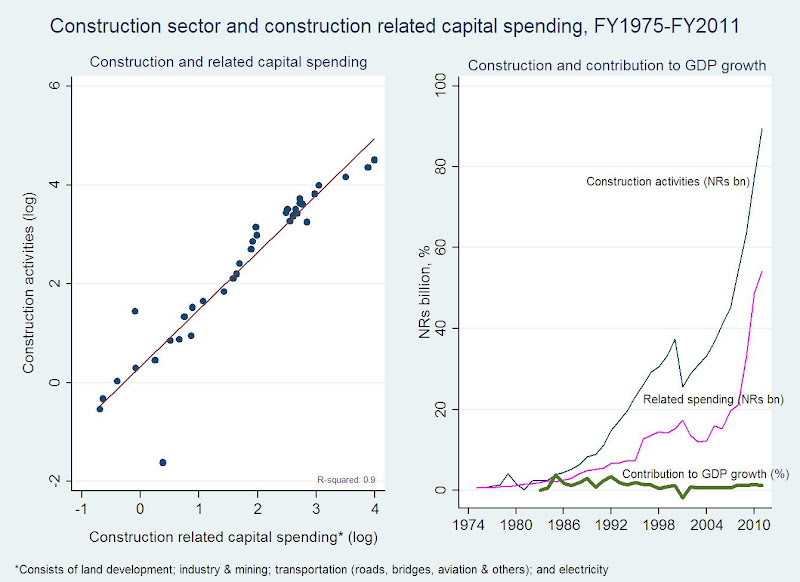 Source: ADB estimates based on data from MoF and CBS.

During the rest of FY2013, the government needs to accelerate capital spending through expedited approval of funding requests for projects, and allocating and releasing adequate funds for projects facing funding constraints, while cutting down delays in procurement process. However, it is also critical that the government is mindful of the quality of capital spending by ensuring sound allocation and quality utilization of the funds through sufficient internal and external control. Towards accelerating capital spending and augment its impact on economic growth, revenue mobilization, and job creation, the government should prepare and unveil a timely and full budget in FY2014 with sufficient capital budget allocation. At the same time, actions to enhance accountability and transparency of public management need to be accelerated, including the reforms for public financial management, public procurement, and other public governance functions.

[2] Further disaggregated data is not available yet.

Posted by Chandan Sapkota at 10:41 PM No comments: