If exports of a country are sufficiently diversified, then there is less volatility even when there is increased openness, argue Haddad, Lim and Saborowski. Before opening to trade it is usually not clear if greater openness would have a positive or a negative impact on growth, i.e. the growth volatility. However, they argue that the composition of the export basket matters in determining if growth volatility is positive or negative.

In particular, the vulnerability of countries to (some types of) external shocks should be reduced when these countries are better diversified in their exports. More specifically, the effect of trade openness on growth volatility – whether negative or positive on average – is likely to be exacerbated when the country in question exports either a relatively small set of products, or sells its goods to a small number of destination markets. The argument is that a higher degree of concentration in exports would imply that any idiosyncratic price shock experienced is more likely to have a substantial impact on the country's terms of trade, and this would then induce greater fluctuations in a country's growth process. Furthermore, a higher degree of diversification would likely imply that a country is involved in a larger number of both implicit and explicit international insurance schemes, which would similarly serve as a cushion against such fluctuations.

Fig: The level of export diversification determines the total effect of openness on growth volatility.

The plot is based on the share of the 5 most important products in total exports as a diversification measure. We can see that the impact of trade openness on volatility is significantly lower than zero, with 90% confidence, as long as a country scores lower than about 0.24 on the diversification variable. The effect gradually increases and changes sign (threshold) at about 0.48. In contrast, above a value of about 0.71, the impact of trade openness on growth volatility is significantly positive.

As expected, all high income economies, with the exception of Norway and Ireland, have attained levels of diversification that lie substantially below the threshold value we identified, implying that they are likely to enjoy the benefits of trade openness while being well shielded against global shocks via the participation in a large number of global value chains. Yet, we also see that the vast majority of countries above the diversification threshold are low income countries, although a large number of low income economies also fall below the threshold. Whereas countries such as Nigeria and Botswana are troubled by extremely high export concentration, China and Nicaragua have reached levels of diversification that fall clearly below the threshold.

This means that export-led growth that is founded on diversified export basket will work. Industrial policy works. And, what countries export matters.

More specifically, policymakers can encourage entrepreneurial export activity by instituting a broad- based system of tax relief and subsidies that support the discovery process, complemented by a liberal trading regime that combines export incentives while relaxing restrictions on the import of intermediates. One way to do this is to facilitate the costly search process for exporters by alleviating information externalities (export promotion agencies) or setting tax incentives for firms to engage in the costly trial and error process of exporting.

Not only should export incentive schemes aim at promoting exports of new products, policymakers should also encourage production diversification as such. This would entail setting incentives supporting the discovery of profitable choices of products, perhaps via tax incentives, subsidised public R&D, or laws and regulations that provide greater access to high risk insurance.

Posted by Chandan Sapkota at 6:24 AM No comments:

Remittances in Nepal after (during) the global economic crisis

This one comes from the IMF 2010 Article IV consultation in Nepal conducted last month. Here is a more comprehensive assessment done by the World Bank analysts.

The following are few charts that substantiate the main point discussed above: 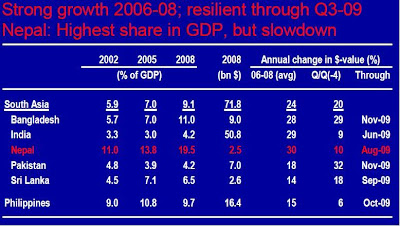 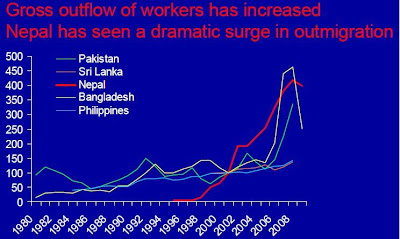 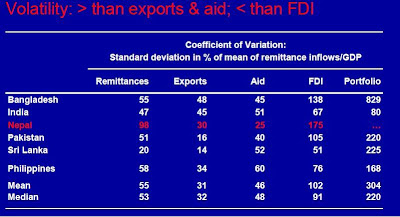 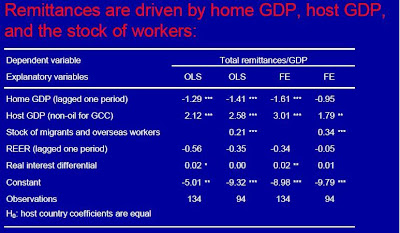 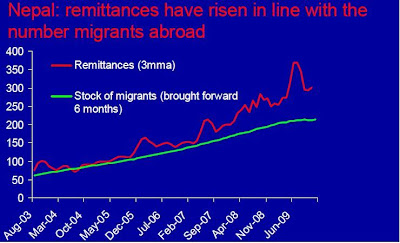 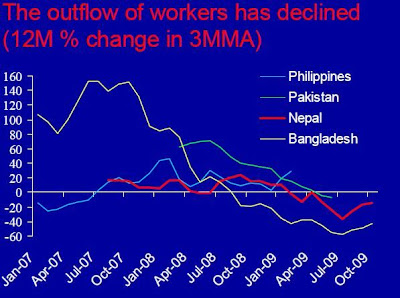 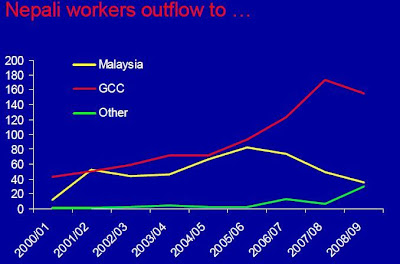 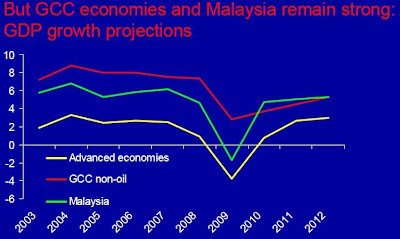 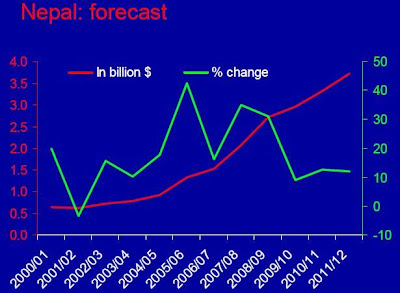 Posted by Chandan Sapkota at 3:19 AM No comments:

What is wrong with the Nepali economy?

The Under-Secretary at Ministry of Finance, Yoga Nath Poudel, in Nepal questions the increase in tax revenue, limited public services and low saving.

The underlying problem is the conflict between the large demands for investment and paucity of domestic savings. Lowering taxes, reducing public sector prices and improving infrastructure and education could lower public revenue in the short run; but it is the only avenue to save the country from being doomed to sink to the bottom of development failures. Rigorously stringent measures may not be politically feasible at this time, but the government can contain expenditure at a sustainable level so that the incoming government may not have to bear the unsound scale of expenditure. The times demand that we hammer out a plan of action that will not further burden the governments to come after the new constitution is written.

The questions is: if you lower taxes, where will the revenue come from to fund the existing meager public goods. Reducing public sector prices is not politically feasible. The tax revenue has been increasing with no increase in tax rates. How is it possible? Stemming corruption and loopholes in tax collection could be the two reasons. Another might be the incentives provided to tax collectors and tax payers to do fulfill their responsibilities as required. If revenue is higher than recurrent expenditures, then there is something wrong with the bloated public sector. Trimming its size is one evil option. Also, rather than nominal increase in revenue, we need to look at real increase in revenue.

The economy is in a bad shape-- expenditures are higher than revenues; huge balance of trade deficit; strain in exchange rate; balance of payments deficit in more than four decades; strains in fixed exchange rate between Indian rupee and Nepali rupee; decline in remittances; tightening of overall liquidity; real estate bubble; strained financing in the productive sectors; huge unemployment problem in the rural as well as urban areas; population growth rate that matches real GDP growth rate; low development expenditures; high recurrent expenditures; double-digit inflation rate; low productivity; demise of garment industry; slackness in total production in the agricultural sector; increasing migration from the rural areas to the urban areas; the inability of the economy to absorb new labor force entering the labor market, thus triggering massive exodus of talented citizens; inequality is increasing … the economic situation is as gloomy as it could get!

But, there are positive signs waiting to show up in the economy, if only there is improvement in law and order; political stability; restraint in YCL and similar organizations disruptive activities; restraint in militant trade unions; a selective industrial policy; (improvement in infrastructure) … Notice that almost all of these are largely related to political factors. The economic fundamental are still strong but the political fundamentals are constraining them and nipping their growth.