Growth from above: Impact of trade disruptions was larger than impact of earthquakes

With two major earthquakes in April and May, and a severe disruption of trade with India from August onwards, the year 2015 was no doubt Nepal’s most turbulent since the end of its armed conflict. The two earthquakes killed about 9,000 people, injured at least twice as many, and destroyed uncountable houses and buildings. Later in the year, dissatisfaction among the Madhesi minority about their representation under the new federal arrangements triggered protests that culminated in the complete shutdown of international trade with India. Official statistics put GDP growth for FY2015 (which starts in October 2014) at 1.6 percent, and for FY2016 at 0.8 percent. This represents a drop of roughly 4 percentage points relative to previous years.

Based on monthly nightlight data, the economic impact of the 2015 shocks was smaller than official statistics suggest. The earthquakes affected most severely rural areas that were characterized by low nightlight intensity even in good times. The fact that these areas were mostly in the dark suggests that even if local impacts were large in relative terms, they may not have made a major difference at the aggregate level. The impact of the trade disruption, on the other hand, was massive. Based on the elasticity approach, from June to October 2015 the GDP growth rate of Nepal declined by 4 percentage points. But economic activity bounced back strongly in November, and over the full year the GDP growth rate might have declined by less than 2 percentage points.

The shocks had a more substantial impact at the local level. This can be seen by using the spatial approach to estimate GDP by district, and then comparing the performance of districts directly affected by the shocks to that of unaffected districts. However, instead of spatially distributing the official annual GDP, the methodology is applied to the monthly GDP estimated using the elasticity approach. This way of proceeding allows to assess local economic activity on a monthly basis.

In comparing growth rates at the district level, it is important to keep in mind that the locations most affected by the earthquakes, or most affected by the trade disruptions, could be systematically different from other locations. As a result, they could grow at a different pace even in normal times. To address this possible bias, a “differences-in-differences” approach can be used. 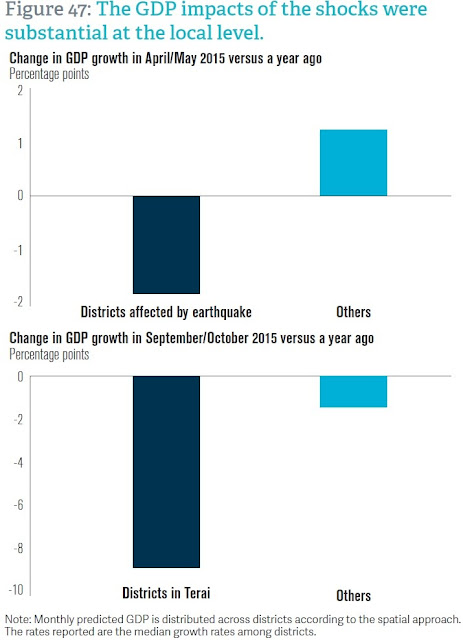 The first difference is between the annual growth rate of local GDP in the two months following the shock and the annual growth rate in the same two months of the previous year. The two months considered are April and May in the case of the earthquakes, and September and October for the trade disruptions. Growth rates are computed relative to the same two months one year earlier. This first difference can be called a growth shock, for brevity. The second difference is between the growth shocks experienced by affected and unaffected districts. The median growth shock across districts in each group is used for the comparison.

Based on this exercise, in April and May 2015 districts affected by the earthquakes experienced a decline in their local GDP by 1.8 percentage points, while unaffected districts grew slightly faster than before. And in September and October 2015, districts in the Terai region closer to India contracted by 9.0 percentage points, whereas the rest of the country saw GDP growth decline by a more modest 1.4 percentage points. These results confirm, once again, that the impact of the trade disruption was much more severe than that of the earthquakes.
Posted by Chandan Sapkota at 12:07 PM No comments: