The Indian government is upgrading its major highways connecting Nepal to facilitate trade and mutual cooperation. Some of these trade routes/highways are a lifeline to Nepal’s economy as a majority of Nepal’s exports and Nepal’s import passes through them. About 60% of Nepal’s exports and imports are to and from India. 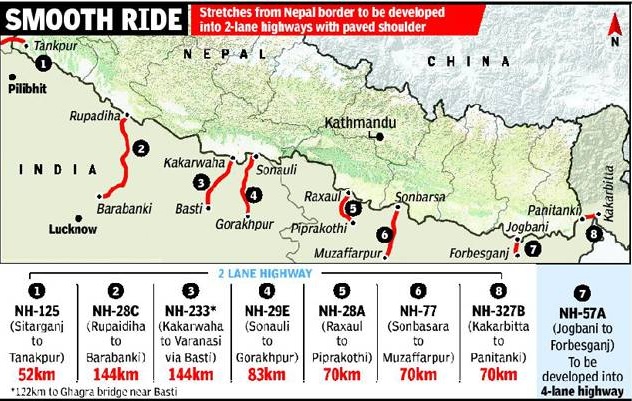 Fully upgrading of such trade corridors are a precursor to developing an economic corridor, growth stimulants and employment generators. The Times of India reports that the Indian Prime Minister Narendra Modi has “asked the ministry to see whether multimodal hubs can be developed on the major stretches, such as Raxaul along NH-28A.”

Ministry sources said, the 70km stretch from Raxaul, on Indo-Nepal border, to Piprakothi on the East-West corridor in Bihar is being widened to two-lanes with paved shoulder by NHAI at a cost of Rs 375 crore. This will be a toll road and the project is likely to be completed by next March.

Nepal should also give equal priority to upgrading of major trade corridors along the border. It will help boost exports and lower the cost of imported goods.

Posted by Chandan Sapkota at 5:07 PM No comments: