In a latest working paper, Basu, De, Ratha and Timmer (2013) compute shadow ratings of countries, including the unrated ones, by making it a function of macroeconomic, structural and governance variables. They find that even after the financial crisis, which led to lowering of credit ratings of a majority of the developed countries, several unrated countries appear to be more creditworthy than previously thought and may actually access international capital markets. The latest paper uses a modified version of the methodology used by Ratha, De and Mohapatra (2011). Here they use a ‘relative risk rating’ and find that even if absolute rating is downgraded, relative risk rating can still improve. 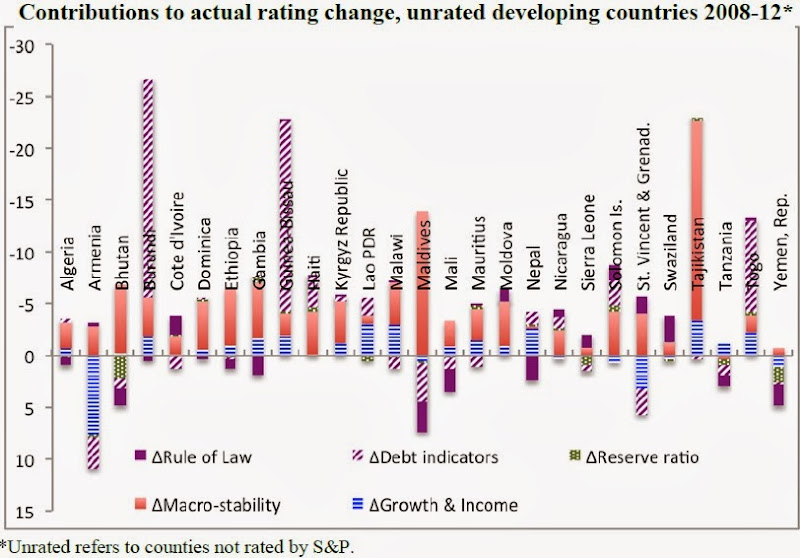 In this context, Nepal has a rating of CCC+ (with positive outlook), the same shadow rating as in 2011. In fact, Nepal’s shadow credit rating is as good as Ethiopia’s, and better than Lao PDR, Nicaragua, and Kyrgyz Republic to name a few. In South Asia, Bhutan has B stable and Maldives has B- stable. In 2008 (before the financial crisis), the authors predicted B- stable for Nepal. The lower than expected rating in 2012 is attributed to the worsening rule of law. The major contributor to Nepal’s CCC+ positive rating is the good debt indicator. Positive outlook indicates the possibilities of an upgrade.

Very interesting article about manufacturing competitiveness over at Mckinsey. It argues that the “proximity to demand and innovative supply ecosystems will trump labor costs as technology transforms operations in the years ahead.” Companies are increasingly shifting production close to demand (for example, rising consumer demand in India has prompted many MNCs to open factors there to tap the Indian market itself and to produce goods at competitive prices). New innovation and local knowledge will help create a competitive manufacturing ecosystem.

Excerpts from the article:

[…]For some products, low labor costs still furnish a decisive competitive edge, of course. But as wages and purchasing power rise in emerging markets, their relative importance as centers of demand, not just supply, is growing.

Global energy dynamics too are evolving—not just the now-familiar shale-gas revolution in the United States, but also rising levels of innovation in areas such as battery storage and renewables—potentially reframing manufacturers’ strategic options. Simultaneously, advances stemming from the expanding Internet of Things, the next wave of robotics, and other disruptive technologies are enabling radical operational innovations while boosting the importance of new workforce skills.

Rather than focus on offshoring or even “reshoring”—a term used to describe the return of manufacturing to developed markets as wages rise in emerging ones—today’s manufacturing strategies need to concentrate on what’s coming next. A next-shoring perspective emphasizes proximity to demand and proximity to innovation. Both are crucial in a world where evolving demand from new markets places a premium on the ability to adapt products to different regions and where emerging technologies that could disrupt costs and processes are making new supply ecosystems a differentiator. Next-shoring strategies encompass elements such as a diverse and agile set of production locations, a rich network of innovation-oriented partnerships, and a strong focus on technical skills.

[…]More than two-thirds of global manufacturing activity takes place in industries that tend to locate close to demand. This simple fact helps explain why manufacturing output and employment have recently risen—not only in Europe and North America, but also in emerging markets, such as China—since demand bottomed out during the recession following the financial crisis of 2008.

[…]The regional, ethnic, income, and cultural diversity of markets such as Africa, Brazil, China, and India (where some local segments exceed the size of entire markets in developed nations) is raising the ante for meeting local demand.

[…]in a few labor-intensive, trade-oriented industries, such as apparel production and consumer electronics, labor-cost changes do tend to tip the balance between different geographic regions; manufacturing employment in Bangladesh and Vietnam, for instance, has benefited from China’s wage surge, even as Chinese manufacturers are seeking to raise productivity.

[…]the narrowing labor-cost gap reinforces the importance of local demand factors in driving manufacturing employment. Indeed, factor costs often have the greatest impact on location decisions within a region—for example, Airbus moving to Alabama instead of Texas or North Carolina. These costs interact with policy factors, such as infrastructure spending and tax incentives, to shape a region’s overall economic attractiveness.

[…]Advanced robotics, 3-D printers, and the large-scale digitization of operations are poised to alter fundamental assumptions about manufacturing costs and footprints. To derive value from these shifts, companies will have to make significant investments and ensure access to hubs of innovation, capable suppliers, and highly skilled workers.

[…]Locating manufacturing close to demand makes it easier to identify and meet local needs. It’s a delicate balancing act, though, to create an efficient global manufacturing footprint that embraces a wide range of local tastes, since economies of scale still matter in many industries.

Posted by Chandan Sapkota at 1:57 PM No comments:

Michael Spence lays out the steps to overcome the challenges to growth (mostly in developed countries):

Posted by Chandan Sapkota at 2:08 PM No comments:

Here is a brief presentation on the recent inflationary development and outlook.

Inflation in Nepal: Recent Development and Outlook
Posted by Chandan Sapkota at 7:39 PM No comments:

Here are the presentation slides from a recent talk on the current state of Nepali economy. Similar presentation done in 2012 here.

Current State of Nepali Economy 2014
Posted by Chandan Sapkota at 8:05 AM No comments:

Remittances and tax mobilization in Nepal

Consumption tax and customs duty make up about 72% of Nepal's tax revenue mobilization. Too reliant on remittances-backed imports and consumption for tax revenue. 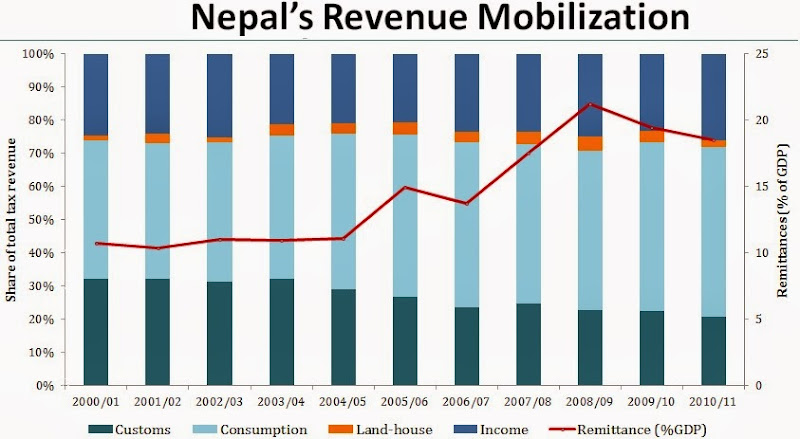 Posted by Chandan Sapkota at 9:32 AM No comments:

Agglomeration or business environment: Which is more important for job creation?

Posted by Chandan Sapkota at 10:40 PM No comments: