Posted by Chandan Sapkota at 3:06 PM No comments:

Initial views on reconstruction conference and governance of aid

Speaking live on Channel News Asia, 25 June 2015. Here is an earlier news on the same topic. A detailed blog on this topic over the weekend. 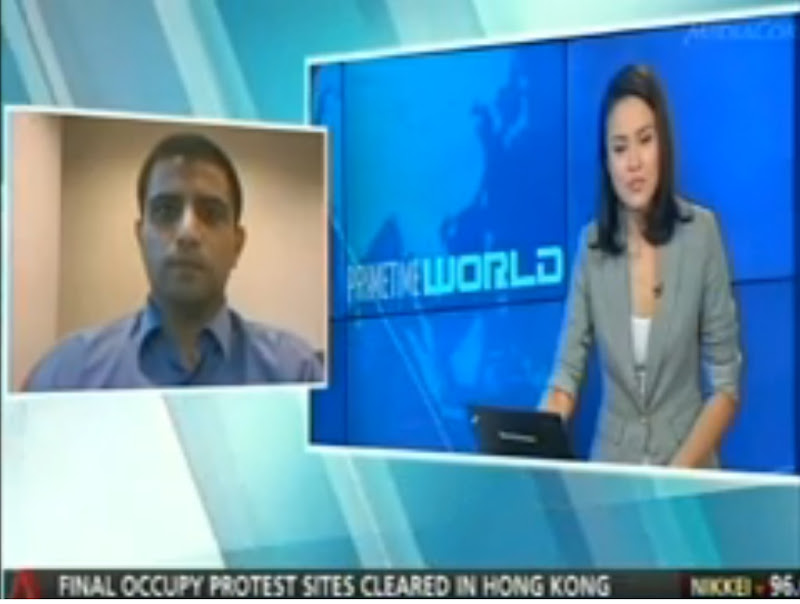 For those interested here are related news stories, where I have been quoted:

Posted by Chandan Sapkota at 4:27 PM No comments:

Forecast of key macroeconomic trends till 2050

Here are some of the highlights from The EIU’s long-term macroeconomic forecast. Look at the prominence of India and China, and imagine how Nepal can prosper through trade and investment cooperation (along with decisive tackling of binding constraints to growth). 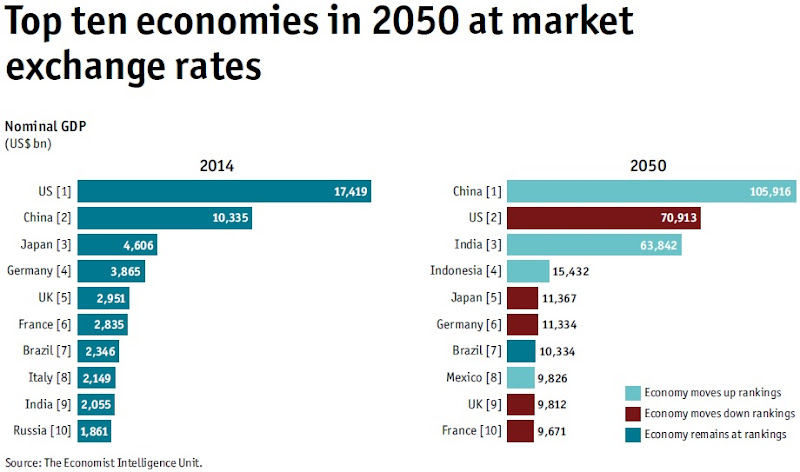 2. Several Asian countries will rise up the economic ladder. Asia will account for over 50% of global GDP by 2050.

3. Population growth (and working-age population) will continue to decline (labor is a major source of growth). 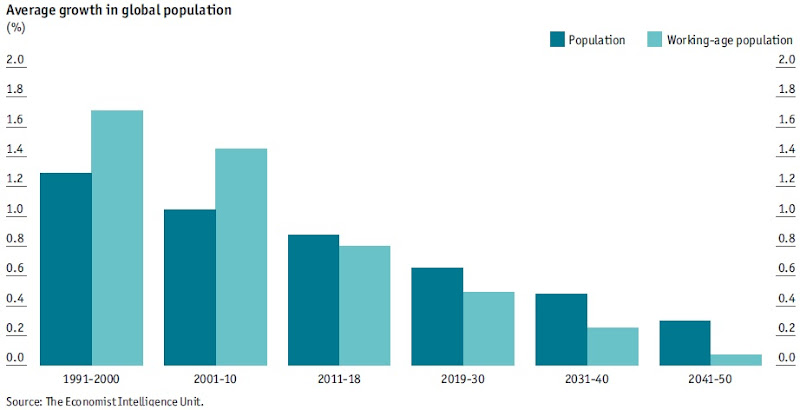 Posted by Chandan Sapkota at 4:06 PM No comments:

Post-earthquake needs requirement estimated at 31.4% of GDP in Nepal ($6.66 billion)

The near-final post disaster needs assessment (PDNA) estimate was disseminated by the NPC today and is widely reported in the media. There may be minor adjustment later on as per the updated information/data, but the overall needs estimate should be around $6.7 billion.

Using an exchange rate of NRs100 = US$1 and FY2015 GDP estimate (preliminary), below are the estimates:

Almost half of the losses, damages and needs are accounted for by the housing and human settlement cluster. Over 0.5 million houses (99% of them private) were destroyed by the earthquake. 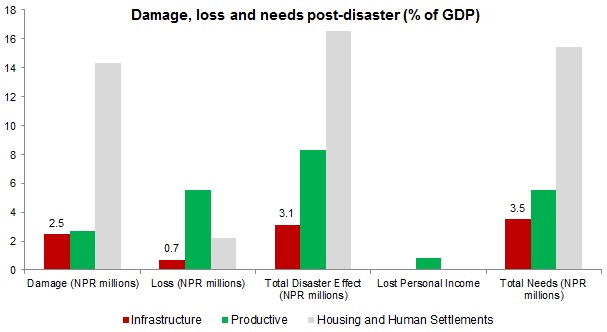 Posted by Chandan Sapkota at 6:11 PM No comments:

The Central Bureau of Statistics released preliminary estimates of GDP growth for FY2015 (ends 15 July 2015). It provides data on pre-earthquake estimate of GDP growth (was supposed to be released on April 26, but it was delayed due to earthquake on April 25) and post-earthquake growth estimate based on the latest data.

It has projected GDP growth to decline by 1.5 percentage points to 3% in FY2015 due to the impact of the earthquake (considering two decimal points gives 1.54 percentage points decline!). Pre-earthquake growth estimate for FY2015 was 4.6%. The growth estimate is on the lower end of ADB’s earlier estimate, which said that growth could drop to as low as 3% if supply disruptions become more intense than initially anticipated. The 7.8 magnitude earthquake struck Nepal in the tenth month of fiscal year FY2015. Pre-earthquake estimate is based on 22 April forecast. Post-earthquake estimate is based on 8 June forecast.

Agriculture sector is expected to grow by 1.9%, industry by 2.7% and services by 3.9%. The sharp drop in agricultural output is primarily due to the negative impact of delayed and weak monsoon in the first half of FY2015, and later the loss of livestock due to the earthquake. 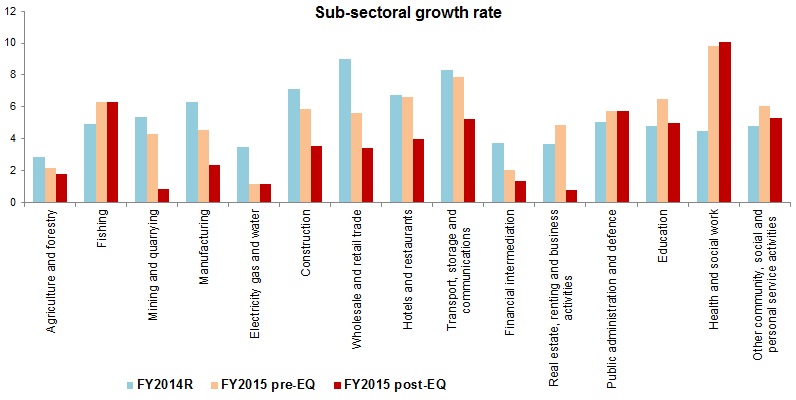 Services sector is affected heavily due to the slowdown in wholesale and retail trade, tourism activities (affects air transport, and hotels and restaurants businesses), and real estate, renting and business activities. Wholesale and retail trade grew by 9% in FY2014, but dropped to 3.4% after the earthquake (pre-earthquake growth 5.6%) in FY2015. This is primarily due to the slowdown in agricultural production and imports of goods after the earthquake. Hotels and restaurants suffered due to slowdown in tourist arrivals, physical damage to hotels and restaurants, and decline in domestic tourism. Furthermore, real estate activities were in line with the substantially lower land related transactions. There was also a substantial slowdown in renting business due to physical damage to buildings. 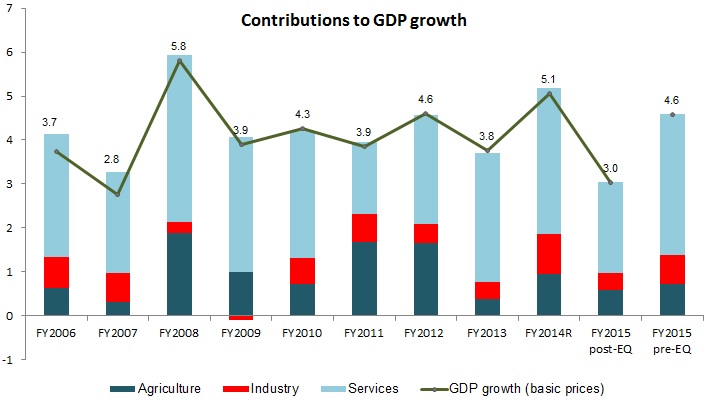 Overall, agricultural, industry and services sectors contributed 0.6, 0.4 and 2.1 percentage points to GDP growth of 3% (at basic prices). Nepal’s GDP is estimated to be $21.6 billion in FY2015 ($371 million less than what would have been in a no-earthquake scenario). Overall, gross output loss is estimated at $529 million in FY2015.

FYI, gross output is the total value of all goods and services produced during the accountancy period (at basic prices). Intermediate consumption is the total value of goods and services consumed as inputs by production processes (at purchasers’ prices). Gross value added is the difference between gross output and intermediate consumption. Finally, GDP is equal to gross value added plus taxes minus subsidies. 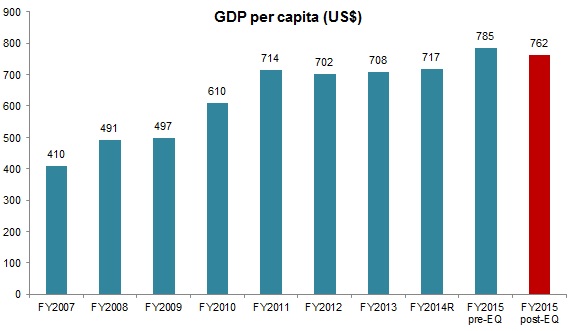 Posted by Chandan Sapkota at 8:41 PM No comments:

Here is an abstract of a recent policy research working paper by Hulman, Kolkma and Kraay:

Posted by Chandan Sapkota at 10:09 AM No comments:

The IMF has come up with a  staff report that outlines macroeconomic policies for small developing economies, particularly in light of the lower oil prices and exchange rate volatility.

Here are some of the takeaways on fiscal management.

Fiscal resilience
Posted by Chandan Sapkota at 9:31 PM No comments: