In its mid-term review of monetary policy for FY2017 the central bank appears overly accommodative by tweaking accounting rules to compute local currency credit to core capital plus local currency deposit ratio (CCD ratio in popular lingo). It has allowed BFIs to discount 50% of productive lending (plus lending to deprived sector and lending to agro sector at subsidized interest rate) while computing the CCD rato. This essentially gives a breathing space to many BFIs that are close to the mandatory threshold of 80. It frees up about NRs130 billion for extra lending (by mid-year BFIs lent about NRs254 billion to productive sector). At the core of it, the BFIs indirectly got what they wanted— more space to lend irrespective of deposit growth. This is a temporary measure with a sunset clause (ending mid-July 2017).

But then will this kind of overly accommodative measure by the central bank foster moral hazard (i.e., the BFIs don't have an incentive to guard against reckless lending risk when they know that they will be somehow protected from its consequences = privatize profits, socialize losses)? The BFIs have been indirectly rescued by the central bank again and again. Initially, it was due to the accumulation of high non-performing assets before 2000, then it was due to aggressive lending to real estate, housing and hire purchase around 2012, and now due to reckless lending even when they clearly knew that deposit growth was and is going down. This pattern of making deliberate (or not!) mistake and then the central bank coming to their rescue in one way or the other is amazing! 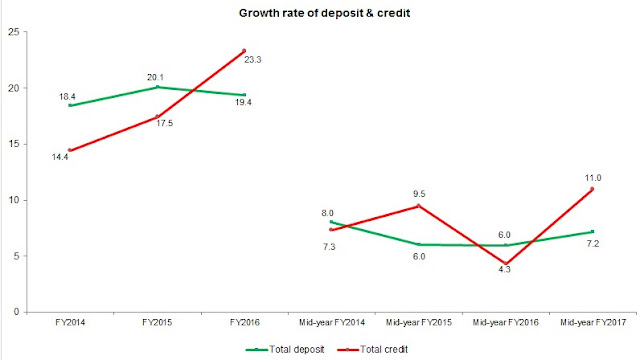 Here is an article on the current liquidity/credit crunch and its causes. For more background, here is another long article on the causes of severe liquidity crunch around 2011/12. Briefly, the BFIs brought the troubles upon themselves by aggressively lending to few sectors to gain quick returns in such a way that the credit growth far outpaced deposit growth. Keep in mind the following points:
Lets say the BFIs lend NRs130 billion extra loanable fund they have now because of the tweak in accounting rules till mid-July. Then what? Will they maintain CD ratio below the mandatory threshold with enough space to keep credit flowing even if deposit growth continues to dries down? How can we be assured that they will not continue to engage in reckless lending to meet unsustainably high profit targets? Will these practices lead to building up of non-performing assets? Any tweaking of monetary policy and established rules should be accompanied by clarity/direction on its expected consequences.


The government might have feared that a sudden credit crunch will squeeze revenue growth from high contributing sectors and will also hurt economic activities. This would mean missing revenue and growth targets for FY2017 (you get a sense of this from the MOF's mid-year review of FY2017 budget). I think the central bank’s decision to tweak the accounting rules indirectly is aimed at addressing this issue rather than cleaning up the mess within the BFIs. Good for short term, but creates uncertainty in the medium term. Interest rates will likely stabilize. .

Anyway, there are good measures as well: revising down limit on personal overdraft loans to NRs7.5 million from NRs10 million (these are sometimes diverted to stock market, real estate and other speculative investments); limiting interest on call deposit to that of normal savings deposit; allowing issuance of foreign currency-denominated LOC for 90 days (lowers cost of borrowing for traders), limit on lending to personal vehicle purchase based on its value, etc.

For now, lending rates will stabilize (lets hope deposit rates will rise by some percentage points). The liquidity/credit crunch will normalize as soon as capital spending accelerates (as usual in the last trimester). Addressing the liquidity/credit crunch brought upon themselves by the BFIs is a tricky issue for the central bank. There ain't no easy fix!
Posted by Chandan Sapkota at 10:33 AM 1 comment: