My latest piece is about the impact of remittances in the Nepalese economy. No doubt that remittances have been vital in holding the economy from falling apart. However, it is also changing the way people make consumption and investment decisions. This is concerning because at a time when GDP is pretty much below 4 percent mark for years, consumption is increasing. Worse, consumption of imported goods is increasing and investment is increasing in few unproductive sectors. This is leading to widening balance of trade deficit and also putting deficit pressure on balance of payments, which usually is positive due to high inflow of remittances. For previous pieces on remittances click here, remittances in Nepal during the global economic crisis, brain drain could be good, and a good review of remittances market in Nepal.

While at transit at Doha International Airport (DIA), I saw migrant workers, mostly from South Asia, working in pretty much all the stores and cafes in and around the airport. There are numerous Nepali workers, who constantly remit money back home, working in places ranging from airports to restaurants. These migrant workers are one of the backbones of our economy. This fact was acknowledged lately by Nepali policymakers. In doing so, they eulogized remittances inflow to such an extent that they either neglected or forgot to track the amount of money entering the country from multiple sources and, importantly, how and where it is spent. The result: Change in consumption habit and investment behavior, leading to an ever-surging imports and balance of trade deficit.

In DIA, Aakash Gaihre, a young Nepali man working at Coffee Beanery, a coffee shop in the airport, curiously asked me if I was Nepali. I replied affirmatively. After a brief informational conversation, he was busy serving other customers pretty much nonstop. Each hour he spends working there, he gets paid and saves whatever is left after factoring essential expenditures to maintain basic living standard in Doha. It is typical of numerous Nepali migrants like Gaihre working at various labor destinations overseas. They work long hours to save and send money back home for the convenience of their family members. They have done their part in uplifting income (and social) status of their families. Importantly, they have constantly played their part in rescuing the Nepali economy from plunging headlong into an abysmal economic mess.

At Tribhuvan International Airport (TIA), scenes of youths like Gaihres forming serpentine lines to board airplanes headed toward major labor destinations, mostly an unchartered territory for most of them, is not uncommon. Their aim is to reach the intended destination, not get duped by manpower agencies, and land on a decently-paying job. The expectation of their families is likewise.

Enter Kathmandu and head toward the Ministry of Foreign Affairs (MoFA) and you will see a much more chaotic scene: Anxious, curious, and confused aspirant migrants waiting to get their passport issued. Thanks to litigious, indecisive, and non-transparent multi-million dollar deal to print machine readable passports, hundreds of thousands of citizens are deprived of an internationally accepted (and required) quality of passport. Hence, the haphazard queue of people at the MoFA premises. No wonder it is a fertile market for commission-sucking brokers.

Go farther away from the city center and you will see a completely different terrain. New buildings are popping up everywhere and there is an influx of migrants in and around city centers. Some of the villages lack the backbone of local economy i.e. youths. Elderly and kids are the main inhabitants of villages as youths have/are headed either to overseas labor destinations or to major city centers. Daily wages for manual labor have more than doubled. Interestingly, each alternate house either has a ‘cold store’ or a retail store—one wonders from where demand comes from. Perhaps, this is the best way to kill time. The opportunity cost of labor appears zero to them. There is no better way to waste labor than be self-employed—unproductive sales person waiting for customers in a place where pretty much every household owns a retail store!

The influx of money sent by migrants sweating and saving pennies overseas is changing the way we consume and invest. While consumption accounts for over 90 percent of GDP, gross domestic savings is equivalent to a mere 9.7 percent. Banks are becoming big fat kids from slim ones as remittances are constantly pouring in, facilitating instant easy lending to a handful of sectors. Due to political instability, squeezing returns on investment and pressure to maintain comfortable profit margin, banks are eschewing lending to traditional employment-generating sectors. Instead, money is channeled into construction, real estate, and import-consumption sectors. These sectors are referred to as “unproductive” i.e. they do not absorb much labor for employment given the scale of domestic investment. 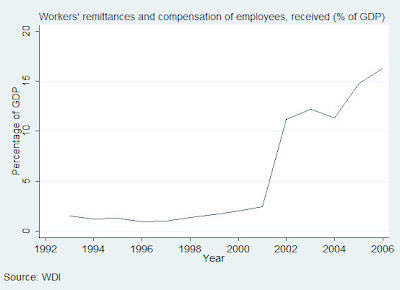 In the last five years, construction and real estate sectors grew at an average of 4.5 percent and 7 percent annually, respectively. In real estate, credit flow doubled from Rs 7.71 billion to Rs 14.92 billion in the past two fiscal years. Unfortunately, GDP growth rate was around 3 percent and industrial sector growth just over 1 percent. Due to neglect and flawed priority, the contribution of remittances in stimulating the real sectors is minimal.

With bitter political bickering for control of state powers, managing uncontrolled flow of remittances hasn’t been a priority. Fierce competition is ensuing among banks to attract deposits and to issue loans with flamboyant, unsustainable schemes. New financial institutions are popping out of nowhere and clogging the already saturated market, especially in the urban centers. The central bank watched this unwanted drama unfold until it was unbearable to do so, chiefly due to the pressure to reduce BoP deficit, tame high inflation rate, and maintain monetary stability.

With these developments in the banking sector, the construction and real estate sectors are transforming from thin and healthy kids to very obese ones. Easy and cheap loans, thanks to remittances inflow, are helping to increase breadth and height of houses in and around major cities. A large proportion of the construction materials are imported. It would have been fine if they were sourced from domestic economy. It isn’t. The demand for these items is so high that the existing supply cannot satisfy it, leading to price-quantity equilibrium at a high and potentially unsustainable point.

The high price is not due to changes in demand and supply at the factor market, but due to a mismatch of desire, demand and supply at the product market. As a result, general prices are rising without an increase in per capita income that is backed by stimulation of domestic economy. The cost of living has gone up both in real and nominal terms. As these undesirable developments unfolded, the central bank and policymakers remained mere spectators, basking on the boon of remittances. Now, they are realizing how the same blessing can be an anathema.

While remittances have taken out hundreds of thousands of households from poverty by increasing household income to bridge poverty gap, it has also changed the way we consume and invest. Things are not boding well for the economy. The policymakers and central bank must look for actionable options to manage the inflow of remittances, and encourage consumption and investment patterns that are consistent with our long-term growth objectives. We should administer and appropriately utilize the pennies saved by thousands of migrants like Gaihres. Their sweat should not go for waste.