Views from the bottom: Listen to what the poor people are saying 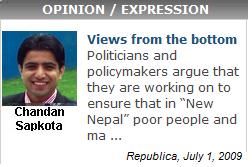 My latest op-ed (Views from the bottom) is based on ODI Working Paper#301 (Governance and citizenship from below: Views of poor and excluded groups and their vision for a New Nepal). There is a lot more to write about the voices of the poor, the evolution of their relation with the local administration officials, their assimilation in the ‘mainstream’ society, and what they think are their priorities to solve the problems plaguing their progress in the society. I will discuss these issues in greater detail in blog posts later this week. For now, I think it is worth posting the whole article below.

Views from the bottom

Politicians and policymakers argue that they are working on to ensure that in “New Nepal” poor people and marginalized classes will have adequate representation and say over things that matter to them the most. On a regular basis, we hear politicians bragging about the work they do in favor of poor people, even if the policies they advocate have little to do with priorities of poor people. What exactly are the priorities of poor people and excluded groups and what do they think about the evolution of local power relations between citizens and state in the post-revolution era?

The findings of a recent study on national participatory governance show considerable differences in priorities identified by poor people and policymakers. The voices (published as a report by Overseas Development Institute (ODI), Working Paper #301) of people at the bottom of income and social strata indicate the level of disconnect between state and its citizens. “A poor Bahun/Chhetri squatter settlement in Kanchanpur district emphasized that they had never been visited by government, NGOs, donors or the media, while a Dalit community in Bhaktapur asked the telephone number of the National Planning Commission in order to follow-up once the study report is released,” the report, which is based on research carried out in 21 communities in 10 districts, notes.

It is not surprising that the priorities of communities across the country are not homogenous and are often hinged on religious, gender, economic and social issues. For instance, Gurungs in Tanahun wanted a Buddhist temple while Mushar Dalit community in Siraha wanted a community house to conduct community activities and to house guests. Meanwhile, women in Western mountain districts aspired for an access to a flour mill and smokeless stoves. For some communities in Makawanpur, control of soil erosion and bridges were the most important priorities.

That said, on major issues there are commonalities in priorities, which are often missed by politicians and policymakers “working” for them from the capital. The major (tangible) priorities, in descending order, outlined by the poor and marginalized people are roads, education, health, water, electricity, irrigation, land, toilet and veterinary services. Their priorities are as simple as it could get and don’t require a grand, multi-year project to initiate them.
People wanted roads in order to establish connection between markets and production sites, to overcome geographic isolation and to promote local destinations as tourist attraction. They wanted removal of user fees in health services and public education as well as an end to unequal access to scholarships and an expansion of range of treatment and medicines.

Meanwhile, Dalits – who make up 13 percent of the population – not only yearned for expansion of access to water services but also an end to discrimination and humiliation in the usage of water and an end to vulnerability caused by land insecurity. For instance, due to ownership of scattered land plots among ‘upper caste’ in Achham, in the case of a Dalit’s death, families were forced to take “a long circuitous route through the hills to avoid sullying ‘upper caste’ properties.”

Furthermore, poor people felt a sense of deprivation and inconvenience to use kerosene in the absence of electricity. The study states, “The demand for electricity was linked to a sense of frustration at the inefficiency of government—in many places poles had been erected a number of years earlier, symbolizing the promise of electricity, but the wiring had never been provided. Even in cases where lines came, house connections were often beyond the financial means of poor households.”

Partly because of their willingness to freely assimilate with Dalits, the Maoist party had more supporters from Dalit community in Pyuthan. Still now ‘lower castes’ such as Sarkis and Dalits are forced to use separate sitting arrangement and utensils in local tea shops and hotels in the name of preserving ‘ritual purity’. Note that though discrimination against Dalits was outlawed in 1960s, it is yet to be reflected in practice.

Rural communities were concerned about augmenting production through better irrigation and expanded veterinarian services for their livestock, which is an important domestic business for some households. For instance, the report notes that poor Bahun/Chhetri community in Achham district refused to cooperate unless the researchers were connected to irrigation service providers. This depicts the level of disconnect between policymakers and poor people.

In some districts, poor people were resorting to illegal occupation and smuggling in the absence of income-generating opportunities and microcredit services. A Mushar community in Siraha resorted to illegal timber collection while some households in Kanchanpur involved in smuggling goods from India to sell at lower prices in the local market.

Muslims, who comprise 4.3 percent of the total population, felt vulnerable to multiple and overlapping sources of exclusion based on religious identity, status as minority language speakers, and identity as Madhesis when dealing with government officials from the hilly region. This is sensitive and alarming issue because “religious tensions exist beneath the surface”. There should be a measured monitoring of this sensitive issue. Note that Muslims had the lowest drop in poverty rates (6 percent) as opposed to Bahun/Chhetri (42 percent) and Dalits (21 percent) between 1996 and 2004, according to National Living Standard Survey II.

The study also identifies key supply-side constraints such as corruption (local administration officials explicitly demanding bribes to register deaths and births in VDCs), limited information flows about public services and development programs, lack of consultation, capture of community user groups by elites, human rights abuses by government agencies, lack of knowledge about legal rights and communal unity fractured by caste-based alliances with varying interests that constrain effective interaction between poor people and local administrations. How to break these constraints? The poor people and excluded groups offer solutions as well – there needs to be equal treatment with respect while seeking public services, improved communication and access to information, larger role for supportive brokers between different groups and local administrations, and increased representation in public offices.

The poor people and marginalized groups need a workable idea that addresses their immediate needs and helps them not only become financially stronger but also gives an opportunity to break socio-economic barriers and engage in state building. This does not require lengthy assessment by experts and grand ideas dogged in an established ideology. It requires listening to the grievances of the poor people and workable ideas proposed by them. The tarnished credibility of politicians and the effectiveness of aid industry would improve if they actually listen to the voices of the poor people and marginalized groups.

Posted by Chandan Sapkota at 12:32 AM No comments: