Dipak Dasgupta, Lead Economist for South Asia at the World Bank lists four reasons that have helped South Asia's growth rate from plunging down drastically as a result of the global economic crisis, which took South Asia’s growth down by about 3 percentage points (from 8.6% in 2007 to 5.6% in 2009). The World Bank expects GDP growth to recover to nearly 7 percent per annum on average in 2010-2011.

1. Remittances held up much stronger in South Asia than in other regions. In Nepal, the reliance on remittances is the highest, and without these flows, growth in consumption would have collapsed.

2. The resilience of some key export-oriented sectors also helped. Garments in Bangladesh and IT software exports from India, for instance, have held up relatively well.

3. FDI inflows to South Asia suffered a decline during the peak crisis period but have since picked-up sharply in India, Pakistan and Sri Lanka.

4. Policy responded early in the crisis, helped by domestic factors such as the pre-election fiscal spending in India. The size of fiscal stimulus announced was over 3 percentage points of GDP in India and significant also in Bangladesh. Interest rates were lowered sharply in most South Asian countries.

Rather than lumping all South Asian countries in the same basket (because high growth from three countries among eight in South Asia jacks up the regional average), there is a need to differentiate the countries into two blocs: high growth countries (India, Bangladesh and Bhutan) and low growth countries that suffer from instability (Pakistan, Nepal, Sri Lanka, and Afghanistan). This way it is easier and accurate to get a clear picture of each country’s constraints on growth, business environment, macroeconomic stability, institutions, governance structure, and bureaucracy . This WB blog post does take a differential look as required, which is not common among South Asian analysts (who actually exclusively look at India and Pakistan and refer it as South Asia; there are six other countries that are member of SAARC!)

Anyway, below are trend of some economic indicators for Nepal (compared with South Asian average). 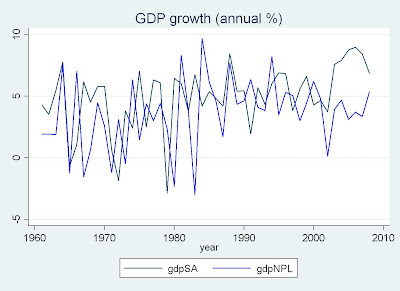 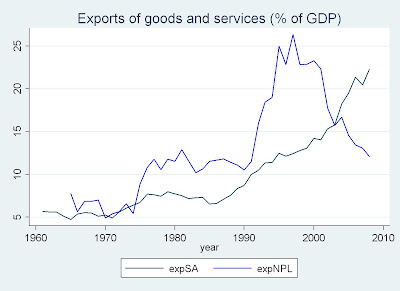 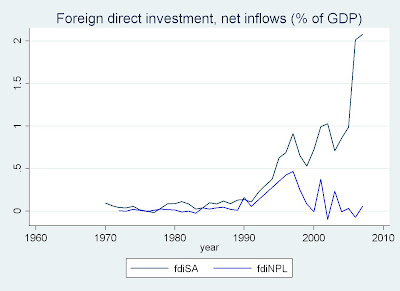 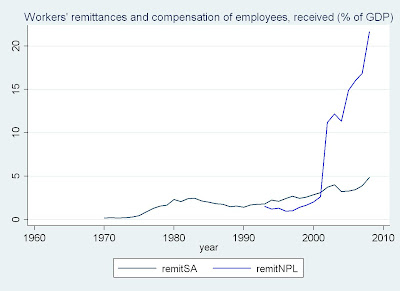 Posted by Chandan Sapkota at 11:45 AM No comments:

Daron Acemoglu explains why and how there is persistent inequality and what can be done about it (fix incentives and governments):

The question social scientists have unsuccessfully wrestled with for centuries is, Why? But the question they should have been asking is, How? Because inequality is not predetermined. Nations are not like children — they are not born rich or poor. Their governments make them that way.

Economist Jeffrey Sachs, director of Columbia University's Earth Institute, attributes the relative success of nations to geography and weather: In the poorest parts of the world, he argues, nutrient-starved tropical soil makes agriculture a challenge, and tropical climates foment disease, particularly malaria. Perhaps if we were to fix these problems, teach the citizens of these nations better farming techniques, eliminate malaria, or at the very least equip them with artemisinin to fight this deadly disease, we could eliminate poverty. Or better yet, perhaps we just move these people and abandon their inhospitable land altogether.

Jared Diamond, the famous ecologist and best-selling author, has a different theory: The origin of world inequality stems from the historical endowment of plant and animal species and the advancement of technology. In Diamond's telling, the cultures that first learned to plant crops were the first to learn how to use a plow, and thus were first to adopt other technologies, the engine of every successful economy. Perhaps then the solution to world inequality rests in technology — wiring the developing world with Internet and cell phones.

And yet while Sachs and Diamond offer good insight into certain aspects of poverty, they share something in common with Montesquieu and others who followed: They ignore incentives. People need incentives to invest and prosper; they need to know that if they work hard, they can make money and actually keep that money. And the key to ensuring those incentives is sound institutions — the rule of law and security and a governing system that offers opportunities to achieve and innovate. That's what determines the haves from the have-nots — not geography or weather or technology or disease or ethnicity.

Put simply: Fix incentives and you will fix poverty. And if you wish to fix institutions, you have to fix governments.

Posted by Chandan Sapkota at 9:14 AM No comments: