In a new book (here is a general summary of the book which argues that developing countries will come to the rescue of the world economy in the post-crisis period) published by the WB, Sanket Mohapatra and Dilip Ratha have a chapter on the impact of the global financial crisis on migration and remittances. They discuss recent trends in and the outlook for migration and remittance flows for 2010-11. Remittance to developing countries is estimated to decline by 6 percent in 2009. Remittances amounted to US$223 billion in 2008 (3x larger than ODA to developing countries). Remittances account for more than one-third of GDP in Lesotho, Moldova, Tajikistan, and Tonga. 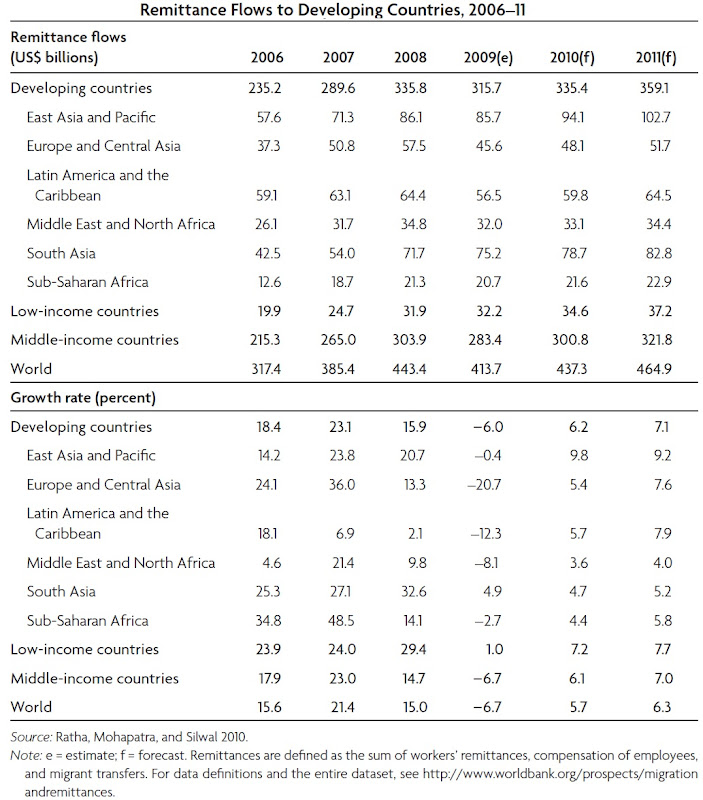 The factors that affected migration and remittance flows in 2009 were:

Existing migrants are unwilling to return back to their home countries, so remittances is expected to increase. Meanwhile, low demand for labor in the Gulf countries would reduce the stock of migrants from Nepal, Pakistan, India, and Bangladesh, among others.

The countries that have the most diverse migration destinations have better chances of remittances being more resilient. Additionally, the total value of remittance inflows to developing countries depends on the prevailing exchange rate, usually between US dollar and their domestic currency. The Indian rupee depreciated by almost 25 percent against the US dollar, leading to a surge in remittance flows and an increase in spending in housing sector, and in bank deposits and stocks.

One notable feature of remittances have been its impact on offsetting balance of trade deficit. It is particularly true in Nepal, the Philippines, Bangladesh, and Mexico.

Posted by Chandan Sapkota at 10:32 AM No comments: