Are services exports competitive than merchandise exports in Nepal?

The governor of Nepal Rastra Bank, Dr. Yuba Raj Khatiwada, argues that services exports are more competitive than merchandise exports in the context of Nepal. At a program organized by SAWTEE yesterday, he said that his confidence in merchandise exports is waning and that just looking at more market access in and preferences from the West will not be fruitful.

Rising labor cost, high interest spread rate, power shortages, and lack of adequate infrastructures  are not the problems of merchandise exports sector only. These are very much obstinately persistent in the services sector (tourism, labor, IT, health, and education) as well. Meanwhile, high inflation and rise in real exchange rate (and the constraints that come with a pegged exchange rate regime) are also affecting both the sectors. High inflation domestically means that in nominal terms prices are expensive here. It means hotels, food, traveling and all other related services are relatively expensive here as compared to periods when there was low inflation. Furthermore, our services sector (except for low skilled labor) are not that competitive when compared to regional partners as of now.

To make them competitive, the government has to invest a huge amount of money in installing the prerequisites needed for these industries to take off. We do not have qualified human resource (or appropriate incentives in place) to take charge of the IT industry and spearhead cutting edge innovation. Meanwhile, the quality of our domestic educational system is far below the regional standard. Evidence: Just look at the number of students going to India and beyond for higher education. Remember how it took millions of dollars of investment in IITs and IIMs for almost a decade before they produced the kind of human resource needed for the Indian IT and management industries. Can Nepal emulate this success story given the existing political and economic constraints? May be, and may be not (look at the failure of the IT Park in Banepa). But, it still does not mean that services exports are competitive than merchandise exports.

As a whole, it sounds all good. The global services market are expanding and recent innovations in technology is facilitating this. But, the question is: how far can Nepal tap this given our domestic capacity right now? I believe not much. So, services exports might have the potential, if tapped rightly and timely, but it is not wholly competitive than the merchandise exports, which is, by the way, performing pretty bad since 1997. The belief that services exports is more competitive than merchandise exports is like plump fruit which one thinks of is sweet, but does not know if it is sweet or bitter without tasting it. Sometimes, perception and reality might differ.

What does data show? 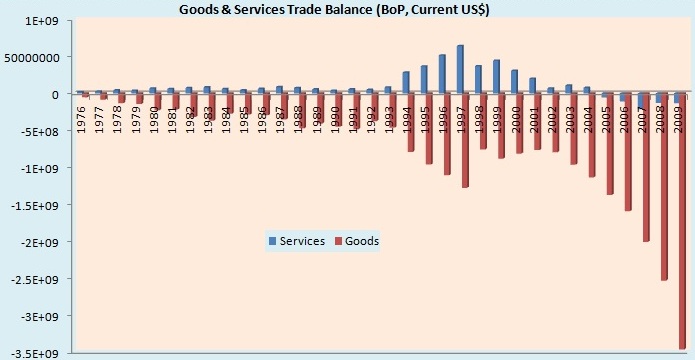 Nepal has been having deficit in trade of goods for a long time. But, we are having deficit in services trade since 2005. We are importing more services than we are exporting in the the last five years. Also, the size of services trade deficit is also fluctuating, but still is negative. Competitiveness of services sector is not very strong than that of merchandise sector as of now. It might have the potential, but not right now.