The WTO has released ‘World Trade Report 2009: World Trade Policy Commitments and Contingency Measures’  warning nations not to fall for protectionist measures despite the current global crisis. The report estimates that trade growth will be strongly negative this year-- world merchandise trade is expected to decline by 10 percent in 2009. It warns that resorting to protectionist measures to aid domestic producers may prolong and deepen the crisis. 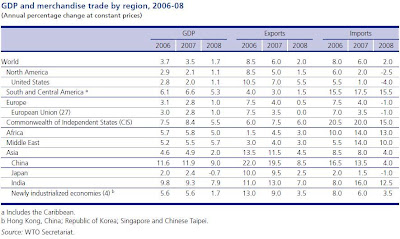 The report argues for “trade contingency measures” that would give some policy maneuver for countries to deal with domestic pressure to prop up domestic markets affected by the crisis. This highlights the need for policy space in trade deals because of the possibility of unanticipated market conditions that are not under the purview of existing trade models and agreements. With this the WTO is arguing for some form of policy space for developing countries that would help them respond to pressing needs of their population, even if the responses are not fully in line with ‘free trade’ principles. Failure to do so in the earlier Doha Round of negotiations (remember special safeguards measures demanded by the developing countries) is holding back its passage. The report reflects a mix of ideas long argued by Rodrik, Krugman, Dixit, game theory stuff--in general, doubting the existence of a completely free international trade market and that “second-best” policies might increase overall welfare in certain conditions--, and market principles.

The analysis of economic effects of the use of contingent measures reviewed in the World Trade Report suggests two main conclusions. First, the design of such measures should aim at limiting the circumstances when they can be used as a protectionist device. Second, the design of contingency measures should not undermine the role of trade agreements. Contingency measures should not be designed in a way that upsets the balance of a trade agreement nor which undermines governments’ objective of making a binding commitment to the private sector.

[…]the Report focuses primarily on safeguards, such as tariffs and quotas, which may be introduced to counter increased imports deemed injurious to domestic industry, anti-dumping duties which can be imposed to respond to alleged injury caused by “dumped” imports, and countervailing duties which can be used to offset foreign subsidies considered injurious to the domestic industry. The Report also discusses alternative policy options, including the renegotiation of tariff commitments, the use of export taxes, and the increases in tariffs up to their legal maximum ceiling or binding.

The contingency measures discussed in the report include safeguards measures, anti-dumping and countervailing measures, the re-negotiation of tariff commitments, the raising of tariffs up to their legal maximum levels, and the use of export taxes. These are needed because too little flexibility in trade agreements may render trade rules unsustainable. At the same time, too much flexibility may weaken the value of commitments and trade rules. An appropriate balance between flexibility and commitment is required for the success of trade agreements.

Contingency measures may be thought of as a safety valve mechanism, a form of insurance, or an instrument of economic adjustment. They may simply be there to strengthen the rule of law. They may entice governments to open their markets further than they would in the absence of these mechanisms, creating a greater quantum of openness than would otherwise be forthcoming. Or they may simply reflect the reality that we lack perfect foresight and therefore cannot write complete contracts for regulating future behaviour under any conceivable set of circumstances.

Some of the key points:

Posted by Chandan Sapkota at 6:46 PM No comments: