Trade is one of the most vital components of our economy. Exports and imports have a strong bearing on macroeconomy, employment opportunities and the pace of structural transformation. We depend so much on foreign goods to satisfy increasing domestic demand and a shortfall in production that imports are six times higher than our exports. This has resulted in a huge trade deficit (value of imports minus exports), which has already reached unsustainable level. Fortunately, high remittance inflows are helping financing it for now.

To address this situation, since 1983, when the first trade policy was introduced, our government has been rolling out numerous exports promotion schemes and import substituting measures. Unfortunately, they have failed to boost exports and reduce trade deficit, thanks to a slew of domestic problems, including supply-side constraints.

Exports of goods and services have been declining since it reached approximately 26 percent of gross domestic product (GDP) in 1997. Last year, it dropped to 9.8 percent of GDP. In contrast, India’s and Bangladesh’s exports are increasing, mainly because of successful implementation of reforms, targeted promotion of exportable items, and timely management of supply-side constraints. Last year, exports (share of GDP) were 21.5 percent and 18.5 percent respectively in India and Bangladesh.

Despite joining the WTO in April 2004 and being a member of two regional free trade blocs (SAFTA and BIMSTEC), Nepal’s trade composition and destination have not changed much. It is still heavily dependent on the Indian market for both exports and imports. About 67 percent of total exports go to India and 66 percent of total imports come from India. Last year, the revenue generated from total exports of goods was still Rs 10 billion short of total petroleum imports. Our ballooning imports are financed by remittances, which are estimated to be US$3.9 billion in 2011. This is about US$2 billion higher than the total export of goods and services. 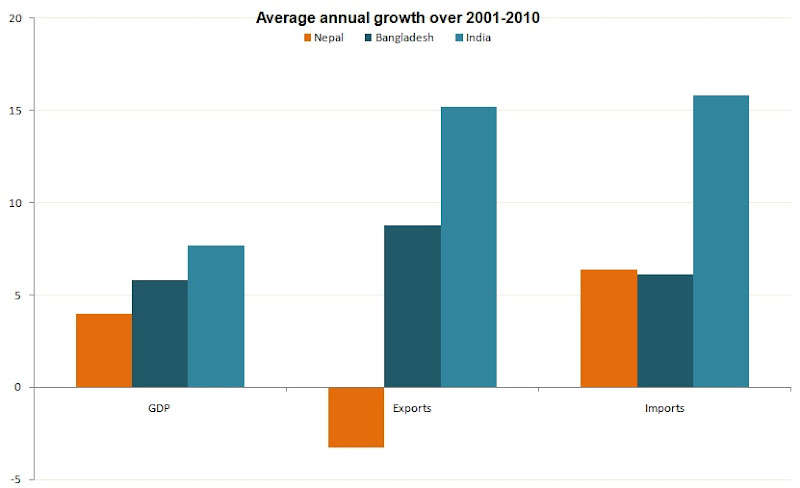 Regarding export and import composition, nothing much has changed though garment and textiles have lost their significance in the export basket. The demand for our exports is price elastic to consumers in destination markets, meaning that as retail costs of our exports increase due to exchange rate fluctuation and high cost of production, quantity demanded decreases. However, the demand for imported items is relatively price inelastic, implying that change in price does not affect much our demand for imported items. It is so because the import demand for petroleum products, low range durables and food items is increasing each year due to low domestic production and high remittance inflows.

The government has rolled out a number of export promotion schemes to boost exports and foreign currency reserves. While updating trade policy in 2009 and industrial policy in 2010, it made a slew of commitments to promote exports. Additionally, the government listed 19 products having export potential and outlined detailed time bound strategies for their promotion in Nepal Trade Integration Strategy (NTIS) 2010. In the latest Three Year Interim Plan 2010/11-2012/13 as well, there is a long list of programs aimed at implementing the recommendations of NTIS.

Despite the updated policies and high priority given to exports sector, why are they performing miserably at a time when our neighbors’ exports are increasing at an impressive? Well, it is not because we have bad policy documents, but rather the inability to implement the policies and strategies promised to boost exports. For instance, even after the construction of Special Economic Zone (SEZ) in Bhairahawa is near completion, the parliament is yet to pass the SEZ bill. The success of India’s and Bangladesh’s export sector owe much to the construction and effective operation of SEZs and the effective implementation of policies designed to address binding constraints.

No number of export promotion schemes is going to work unless our politicians and policymakers put the house in order, i.e. address domestic supply-side constraints that are eroding competitiveness of our products.

First, the most binding constraint to economic activities in Nepal is the lack of adequate infrastructure. The supply of road network, electricity and irrigation facilities has not matched the growth in demand for them. There is still a demand-supply gap of around 450MW of electricity during dry season, leading to operation of industries below their capacity. Worse, investors are compelled to run their machines using imported diesel and petrol. For fear of protest and further rise in inflation rate, the government is subsidizing diesel, inflicting losses to the state-owned Nepal Oil Corporation. Additionally, many industries and production sites are not linked with good roads, leading to delay in delivery despite adequate production on time. In the agriculture sector, farmers are not supplied with adequate fertilizers and irrigation. These have led to increase in cost of production, wastages, and operation below capacity. Note that Nepal’s infrastructure ranking is the second worst out of the 142 economies in the latest Global Competitiveness Report (GCR).

Second, political strikes (bandas) are disrupting production, supply and distribution of goods and services. Just a few years back, big retailers such as Wal-Mart and Gap withdrew planned orders of garment due to our producers’ inability to supply goods on time, thanks to repeated strikes along the main trading routes and highways. This was/is further impacted by the violence and strikes during and after the Maoist insurgency, leading to a sharp rise in cost of production and loss of cost and quality competitiveness. These problems rarely affect the export-oriented sector in our neighbors.

Third, labor issues have been the thorniest since 2006. The UCPN (M)-affiliated trade unions have wreaked havoc on the industrial sector by incessantly demanding hike in wages and other services that at times are inconsistent with labor productivity. Investors are scared of the militant trade unions and their aggressive cadres. Even after multiple rounds of wages and compensation revision, the unions are still not satisfied. Several hotels, manufacturing plants, and factories with foreign investment are already closed due to labor problems. Note that labor cost in Nepal is already the highest in South Asia. These have hit exports the most and nearly wiped off of the garment and textiles sector.

Fourth, our exporters relied more on market concessions in destination markets than investing on research and development. A prime example of this is the near demise of garment industry after the end of Agreement of Textiles and Clothing (ATC), which eliminated quotas on the trade of textiles and clothing, in 2005. The end of ATC was known in 1990 itself and quota was phased out in successive four phases starting 1994. But, still neither our exporters heeded to it nor our government proactively worked to reorganize and restructure this sector to confront intense competition in the international market. Countries such as China, India, Cambodia, Bangladesh and Viet Nam that invested heavily to promote innovation in these sectors gained after 2005.

Fifth, our policymakers were inept to comprehend the ever-evolving force of globalization. While talking about structural transformation and high growth rate, they failed to implement reforms promised in voluminous documents and lofty speeches. New policies were introduced without looking at coherence with the already existing ones, leading to confusion and paralysis in implementing the already agreed ones. Innovation and self-discovery (i.e. learning by making mistakes and taking risk) were never promoted. There is a lack of coordination among government, investors and producers to foster innovation and competition.

Given the limited amount of resources at our disposal, we cannot address all the problems at the same time. The most binding constraints have to be addressed first. To bring down costs, the industries need good roads, uninterrupted supply of electricity and other facilities, security, network of firms producing similar range of products in the same space and attractive incentives. All of these cannot be provided to each firm scattered across the country. But, at the same time, without these facilities our firms cannot produce efficiently. The government could immediately pass SEZ bill, construct such zones in strategic locations like India and Bangladesh are doing, and then provide the required facilities to firms operating inside such zones. This positive discrimination is the most cost effective way to deal with our industrial and export woes at present.

Apart from this, what is really needed is serious implementation of the already committed reforms in trade and industrial policies. It will do a lot in boosting production and exports and in making our products competitive in the international market. Additionally, we need to successfully negotiate with neighbors to reduce trade barriers that are increasing production, transaction and transportation costs. Importantly, to boost production and exports, we need to make Nepal a better place to do business in and provide the necessary enabling conditions for smooth operation of firms and stimulation of entrepreneurial activities.