Impact of a 4 degree hotter world

In its new report (Turn Down the Heat: Why a 4°C Warmer World Must be Avoided), the World Bank has warned of “a cascade of cataclysmic changes that include extreme heat-waves, declining global food stocks and a sea-level rise affecting hundreds of millions of people” if the global community fails to act on climate change, which might heat up Earth by 4 degree Celsius (4°C)— above pre-industrial levels—by end of this century. It says that the current greenhouse gas emissions pledges are insufficient to bring down projected temperature rise. 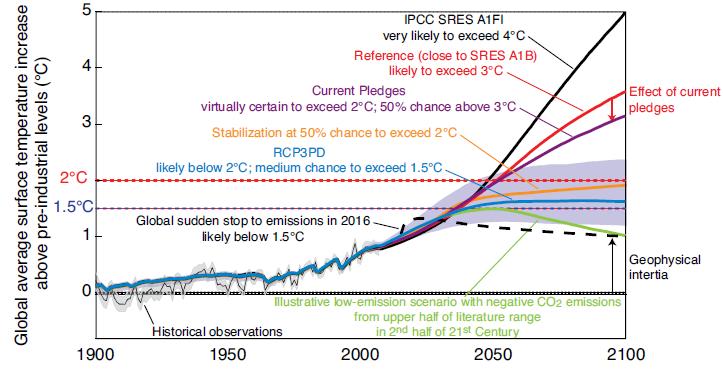 An interesting part of such studies is the key findings, which seeps into the policy document of development agencies, I/NGOs and governments. Anyway, here are some of the key findings:
Earlier, there were studies that looked at the impact of climate change on growth and trade. By analyzing the historical fluctuation in temperature in 125 countries between 1950 and 2003, Dell, Jones and Olken (ungated version here) found that it does not have significant economic impact in rich countries, but in poor countries one standard deviation increase in mean annual temperature reduces economic growth by 0.69 percentage points. It impacts agriculture and industrial outputs, political stability, and leadership transitions.  In a research note, Canuto and Onder discuss three ways through with trade intensity affects emissions.
Additionally, a recent analysis of land-surface temperature by Berkeley Earth shows that the rise in average world land temperature is approximately 1.5°C in the past 250 years, and about 0.9°C in the past 50 years. Importantly, it shows that humans are responsible for the increase in temperature especially in the last 50 years.
Posted by Chandan Sapkota at 9:50 AM No comments: