Ha-Joon Chang has a new paper on industrial policy (I think it is still a draft), which he presented at ABCDE conference in South Korea recently. He tries to push the debate over industrial policy in a constructive path, i.e. how to make industrial policy work better rather than wholly criticizing it despite knowing that every country in one way or the other, even under the WTO rules, engages in industrial policy. Below is a summary of main point of the paper.

Chang argues for "selective industrial policy", which basically is a policy that deliberately favors particular industries over others, against the dictates of market, to enhance (not necessarily) efficiency and promote productivity growth. Almost all industrial policy measures involve selectivity and targeting; the real difference lies in the degree of targeting. A more targeted industrial policy would mean easier monitoring and lesser "leakages".

He argues that the state can sometimes “beat the market" because it designs policies based on a national and long-term perspective, rather than sectional, short-term perspective. This is close to the development experiences of Japan, South Korea, Taiwan, and Singapore in the post WWII period. [Rodrik also makes a similar argument for selective intervention to clear information externalities and coordination failures in the market. For instance Brazil directly aided its steel, aircraft and shoe industries (high levels of protection and public ownership, R&D investment and subsidized credit); Chile aided its grape, forestry, and salmon industries (R&D investment), and Mexico aided its motor vehicle and computer industries (ISI initially followed by preferential tariff policies under NAFTA)]. 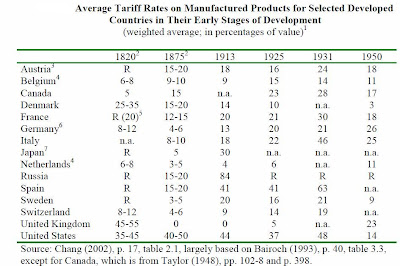 Chang shows evidence that industrial policy had been practiced for a long time, even in the existing bastions of free market economy. The US government ran a huge industrial policy-- between 1950 and 1980, 47-65% of national R&D spending was financed by the US government as against approximately 20% in Japan and Korea and 30% in Europe. The US and Britain had the world's highest levels of tariff protection during their respective catch-up periods (45-55%). The successful countries right now provided subsidies to promote targeted industries, set up state-owned enterprises or public-private joint ventures for risky projects and regulated FDI, among other measures. In the post-WWII period, Japan was the first country that used the term industrial policy (sangyo seisaku) to mean selective industrial policy. 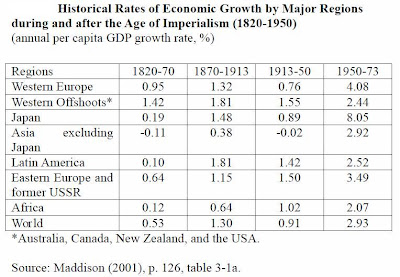 According to Chang, industrial policy measures in East Asia included:

He maintains that industrial policy cannot be measured purely in terms of financial transfers because the effect of many of industrial policies (especially at the sectoral level and the economy-wide level) are not quantifiable. Also, the impact of a country's industrial policy cannot be fully measured in few years because of "super-sectoral" policy measures that address issues like complementarities, linkages, and externalities-- all of these take years, even decades, to come to full shape. For instance, Korea's resurgence in steel trading took years after Heavy and Chemical Industrialization (HCI) was launched in 1973. Chang rejects the notion that the East Asian countries could have grown even faster if there were no industrial policies. He also dismisses the argument that East Asian countries were more productive because of culture (high savings rate, strict work ethic, high-quality bureaucracy).

These countries must have had some country-specific "countervailing forces" that were so powerful that they cancelled out all the harmful effects of market-distorting industrial policy and still generated the highest growth rates in human history (6-7% annual growth rate in per capita income over four decades). I find this highly implausible. Are these skeptics really seriously suggesting that, without industrial policy, these powerful countervailing forces would have made the East Asian countries grow at- what?-9%, 10%, or even 12%, when no country in history has ever grown at faster than 7% for an extended period, industrial policy or not?" [...] "Korea's savings rate on the eve of its economic miracle was barely 5% and started rising after growth took off. At the end of colonial rule, literacy rate in Korea was only 22% and its industrial base was smaller than that of Ghana. After 1950s, Korea and Taiwan did not get an exceptionally high amount of foreign aid.

He believes that industrial policy did work in East Asia and its relevance has not died yet.

Economic development is impossible without good export performance. He argues that the failure to promote enough exports is one of the reasons why Latin American stint with ISI was not successful as those in East Asia. Balance of payments could be a strong constraint to economic growth.

Even if a country can export some goods with comparative advantage, industrial policy is still needed because there might be other sectors that could turn out to be more favorable if productive capabilities are built in time (with state support). For long run growth, it is not enough to rely on comparative advantage-conforming industries. For instance, a small rise in wages, which in turn could be caused by rise in exports of narrow set of goods, could undermine the balance of an economy. Avoiding this would require upgrading from export industries to comparative advantage-defying industries, which requires even stronger industrial policy. Example: Heavy and Chemical Industrialization (HCI) program in South Korea. He thinks that globalization has not diminished the role of industrial policy as some form of tariff structure, however minimal, always exist in WTO rules.

Posted by Chandan Sapkota at 11:08 AM No comments: