Women may be uneducated but not ignorant!

What a nice sentence:

Women may be uneducated but apparently they are not ignorant.

Short and sweet sentence that speaks volumes against the argument that state provision of reservation/allocation of a certain percentage of seats, be it in the parliament or jobs in government agencies, to women is not good in terms of potentiality and efficacy. True in an ideal, perfect job market but not in a semi-market where there is a nexus or series of male dominance in almost all level and structure of political, economic, and social sphere. If we acknowledge that women empowerment has positive effect on the major indicators of development, then we should not hesitate to make decisions considering history, where women were never allowed to rise above the social ladder, irrespective of their qualifications, and were always kept under male dominance.

The trend of male dominance should be broken and it has to be done in such a way that women are given equal footing right from the beginning of reform process. This might also mean that incompetent women may land in positions they are not supposed to be if we consider merit. However market unfriendly it might seem, we have to realize that imperfect markets should not flourish on top of deep social discrimination against women.

If reforms related to representation, which should have a clear cut sunset clause, can temporarily overstep the logic of merit in the job market, and in the long run could lead to a more optimal solution than the existing sub-optimal one, then it is perfectly rational to implement that reform. Read my commentary on the economics of reservation published in January 2008 here (alternative like  here). I support temporary reservation of government jobs and parliament seats to the marginalized groups, including women. The government of Nepal had recently made a provision to allocate 33 percent of jobs in government agencies and in the parliament for these marginalized groups.

Here is a nice article about mainstreaming women.

...The CA holds approximately 33 percent women. Though it fails to fulfill righteous 50 percent—women consist of half of the population—it is still the giant stride from previous six percent women in the last elected parliament. Increasing number of women in politics is an encouraging sign but the question of their potentiality remains crucial, their voices might vanish into the shrill voices of males.

...When the women like tailors, domestic help were nominated as CA members, the media started publishing nonsense. They swept the ethic by blatantly portraying women as banal. News came with loathsome tendency: CA member while sewing cloths, or while washing others utensil. The intention behind this news was, look what has become of our country? Those low profile women have risen. What would those uneducated morons do?

We cannot or must not undermine efficacy of women saying they are uneducated. Of course, they do not know many things but they can raise a voice for grass root level. They will give points that can be coded as law by the expert CA members. Women may be uneducated but apparently they are not ignorant.

Posted by Chandan Sapkota at 10:15 AM No comments:

A very Canadian way to solve a world problem

Together they form the basis of what is often called "hidden hunger," the deforming element of malnutrition that stunts children's growth and can dramatically shorten the lives of youngsters and pregnant women throughout much of Africa and southeast Asia.

The other surprise was that the person advocating the investment is a Canadian: Susan Horton, an economics professor at Wilfrid Laurier University in Waterloo, Ont., who has been involved with Third World nutrition issues since a graduate-student stint at Bangladesh's International Centre for Diarrheal Disease Research about 30 years ago.

Her plan: An investment of $347 million a year over five years to scale up the delivery of vitamin A, iron and iodine, and to add zinc and folic acid to the majority of diets in sub-Saharan Africa and much of Asia. She believes the result would be an estimated $5 billion in health-care savings and future earnings — and saving something in the order of 3.5 million lives.

The Copenhagen Consensus for 2008 lists that micronutrient supplements for children (vitamin A and zinc) as the top most solvable (based on what produces the biggest bang for a buck) problem for this year. Every dollar spent on micronutrients would generate a $17 return in health and productivity costs, which is far greater than investments in global warming or counterterrorism, which require enormous amounts of public money to make even a modest amount of headway. The top ten problems in the list are micronutrient supplements for children (vitamin A and zince), the Doha development agenda, micronutrient fortification (iron and salt iodization), expanded immunization coverage for children, biofortification, deworming and other nutrition programs at school, lowering the price of schooling, increase and improve girls' schooling, community-based nutrition promotion, and provide support for women's reproductive role.

A fiasco named NOC (a good article about sorry state of state-run Nepal Oil Corporation and the perennial short supply of oil, even when subsidies are scrapped and prices upped multiple times. What's the secret: corruption, political infringement in management decision, poor governance, and poor accountability) 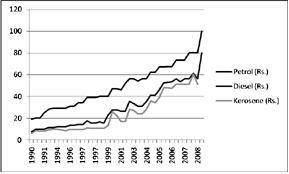 See my take on the Nepali fuel crisis and the troubled NOC here (written in Sept 2007, but for some reason it was not published in the newspaper I usually publish Op-Ed and Commentary).

Large cardamom export touches new record (Nepal is the largest exporter of large cardamom. This product has been identified as having the highest export potential. I don't understand why the policymakers are neglecting this particular product rather than actively promoting its production in the country. Nepal has already squandered decades promoting garment and textile sector. Sadly, the same sector is now reeling under sustained recession (I say the Great Garment Depression of 2005/06 in Nepal) chiefly because of slacking competitiveness of Nepali products and production efficiencies fostered by subsidies and duty free access in the West until the end of MFA in 2005)

Posted by Chandan Sapkota at 1:24 AM No comments: