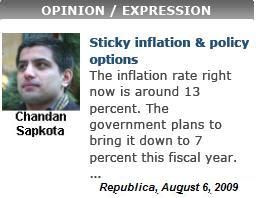 In my latest op-ed, I discuss why general price level is so sticky in Nepal and why inflation rate is not fully consistent with the growth rate in money supply (M2). I argue that higher inflation rate in the Nepalese economy is not due to demand side factors but because of supply side factors, mainly supply bottlenecks. There is little the central bank can do without severely disrupting economic activity, which has been at a very low level. In order to tame down sticky inflation at high levels, the government has to use political, regulatory, and diplomatic means at its disposal.

The inflation rate right now is around 13 percent. The government plans to bring it down to 7 percent this fiscal year. With an aim to attain this target, the central bank also announced monetary policy immediately after the finance minister presented this year’s fiscal budget. It should be noted that the planned policies of the government (and the central bank) to bring inflation rate down by about five percentage points in a year are not fully clear and so far have failed to convince investors that they have necessary tools and plans to meet the target. The factors that are causing unabated rise in general price level are supply side and there is very little the central bank can do given the nature and causes of rising general price level, which appear as sticky as wages are. 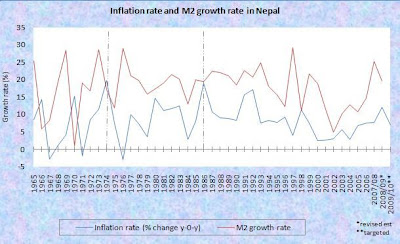 Note that in an economy like ours where economic and financial institutions are just starting to take shape coupled with substantial lags in policy implementation, it is not surprising that the trend in inflation rate is not fully consistent with growth in money supply. This means the factors causing rising price level are outside the boundary of traditional monetary instruments at the disposal of the central bank. The inflation rate of approximately 13 percent at present is the highest in this decade and, importantly, out of sync with monetary and exchange rate policies. What raises eyebrows is that the price level in Nepal is not consistent with the one prevailing in the Indian economy. The price level in Nepal is supposed to move in tandem with that of the Indian economy mainly because of close integration of the two economies, fixed exchange rate between Indian and Nepali currency and easy currency convertibility in the Nepali market.

In the previous years, the price level was not sticky as it is right now. The high inflation rate in 1974 was caused by global fuel crisis in the 70s but it quickly plunged down as fuel prices stabilized. Similarly, the rise in price level in 1992 was primarily due to a surge in investment following liberalization of the economy under a new industrial policy. Again, price level quickly fell down in the following years. This time, the story is different. Initially, domestic prices shot up due to high global food, fuel and commodity prices and an intensification of domestic supply bottlenecks in the beginning of 2008. Despite decline in global food, fuel and commodity prices, the general price level in Nepal is still on the rise. What could be the cause(s)?

In the past five years, gross consumption on average has been 90 percent of GDP and it has not changed radically. So, its pressure on general price level is more or less the same in the past several years. Similarly, investment level in the economy is also not increasing as alarmingly as price level has. Furthermore, the changes in imports and exports are also not as dramatic as the rise in price level. This means that the continuing rise in prices cannot be fully explained by demand side factors.

It appears very likely the main driving force behind rising price level is supply bottlenecks. Some studies reported in the media indicate that hoarding and black marketeering is contributing 30 percent to the rise in price level. Similarly, stockists and wholesalers are contributing 20 percent, bandas and strikes 10 percent while export hurdles from the Indian side are contributing 40 percent. All of these factors have created supply shock in the domestic economy, causing prices to spiral up quickly and remain sticky at a high level. For instance, transport obstructions and strikes hinder supply of essential goods and commodities, leading to short-term shortage and quick rise in prices. Note that between January and July 2009 alone, there were 612 transport obstructions and closures in different parts of the country.

It is ironic that despite being a monetary variable, the solution to rising inflation rate in the Nepali economy right now is beyond the realm of monetary instruments at the disposal of NRB. The central bank has already done what it could do (the NRB kept cash reserve ratio (CRR) and bank rate unchanged at 5.5 percent and 6.5 percent respectively) without severely disrupting economic activity. Even if it engages in aggressive open market operations, the supply side constraints won’t be relaxed easily.

The spiraling price level has to be checked and dragged down through regulatory, political and diplomatic means. First, it is a collective responsibility of all the political parties to forge a consensus in discouraging road blockades, the most popular form of protest against whoever is governing the country. This would help smoothen supply and control short-term price volatility in local markets. Second, the government has to aggressively use its regulatory power to raid shops and castigate wholesalers and retailers that are deliberately holding back inventories and artificially jacking up prices. It could also engage in rationing and reducing import taxes on essential goods that command more weight in the basket of goods and services consumed in the economy. Third, the government has to pursue diplomatic means to convince the Indian government not to ban exports of or impose high export tax on essential items that are widely used in Nepal. Prime Minister Madhav Kumar Nepal should raise this issue with his Indian counterpart during his trip to India in two weeks.

The rising price level is eroding purchasing power of people and is making them poorer in real terms. To restore investor confidence in the economy, controlling rising inflation rate is essential. And, since there is little the monetary authorities could do, it is up to the coalition government and the opposition parties to find ways to control rising prices because the causes clearly are supply side and quick solutions lie in how well our politicians and policymakers use political, regulatory and diplomatic means at their disposal.