This blog post is adapted from Macroeconomic Update, August 2014, Vol.2, No.2.

The outlook for FY2015 is a bit less optimistic than that for FY2014, mainly due to the subnormal monsoon forecast and the likelihood of moderate El Nino conditions, which result in deficient rainfall and droughts. Not only did the monsoon rains arrive late this year[1], the overall rainfall also is expected to be lower— around 93% of the long term average[2]. This will potentially lower agriculture production in FY2015. It will be further exacerbated by the impact of natural disasters, particularly floods and landslides. However, with the gradual improvements in the political environment and the resurgence of investor confidence following the government’s commitment to unveil ‘second generation’ reforms to stimulate private investments, the industry sector s expected to perform much better than in the previous years. While he improved private sector confidence will likely boost manufacturing activities, the timely full budget with higher planned capital expenditures along with better project readiness, as well as increases in bank credit to personal housing may boost construction activities. The high inflow of remittances will continue to support robust service sector activities, especially wholesale and retail trade; transport, storage and communications; and real estate, renting and business activities. 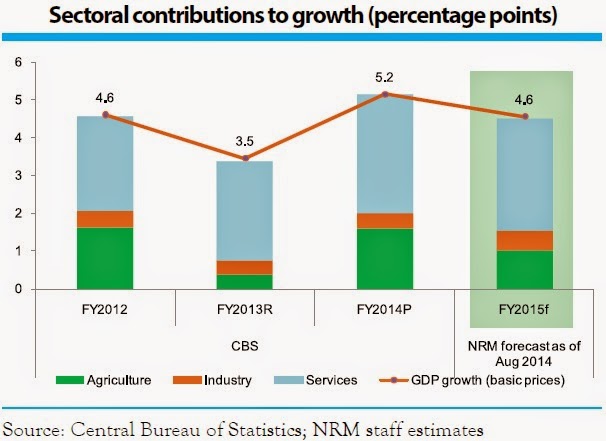 Considering these developments, GDP growth (at basic prices) is forecast at 4.6% in FY2015, lower than both the FY2014 estimated growth rate and the government’s target of 6% set in the budget. Over six-tenths of the contribution to this growth rate is expected to come from the services sector, followed by one-tenth from the industry sector and the rest from the agriculture sector. Overall, the continuing robust services sector growth and a potential strong recovery of the industry sector will be partially offset by the anticipated decline in agricultural production, lowering the GDP growth rate in FY2015 compared to an estimated 5.2% in FY2014. In order to reach a 6% growth rate, assuming agriculture sector growth of 4.7% (which in reality in unlikely given the unfavorable monsoon), the non-agriculture sector has to grow by at least 6.7%, more than one percentage point higher than the growth rate in FY2014. Furthermore, assuming constant agriculture and services sectors growth as recorded in FY2014, the industry sector has to grow by a whopping 9% to achieve the government’s growth target. This would be challenging as industrial sector growth has averaged just 2.7% in the last three years.

The expected low agriculture harvest, potential rise in administered fuel prices and transport cost, increase in public sector salary and allowance for two consecutive years, and disruptions in domestic distribution systems as a result of natural disasters and strikes will likely push up general prices of goods and services to 9.5% in FY2015. Furthermore, the heightened inflationary expectations will potentially exert further pressures on prices, especially that of key food products and clothing imported from PRC. The unfavorable monsoon will not only lower production and put pressures on food prices, but it might also encourage hoarding of major food products, creating additional pressures and further heightening inflationary expectations. That said, there is a high likelihood of a moderation of prices that pass-through imported goods from India and third countries as the ongoing stabilization of foreign exchange markets and increasing investors’ confidence on the Indian economy—thanks to the anti-inflationary stance by Reserve Bank of India Governor Raghuram Rajan and the credible, investor-friendly government led by Prime Minister Narendra Modi— might result in strengthening of the Indian currency in FY2015. Food and beverage, and non-food and services will likely account for about 60% and 40%, respectively, of the overall CPI inflation. 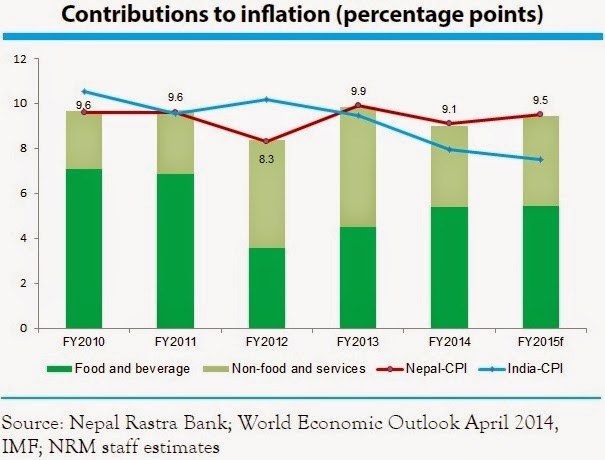 [1] Monsoon rains were late by around two weeks. Normally monsoon rains enter on June 10 from the Eastern region, and gradually covering the entire country within a week. Approximately, 80% of total rainfall occurs between June and September.

Posted by Chandan Sapkota at 9:07 PM No comments: