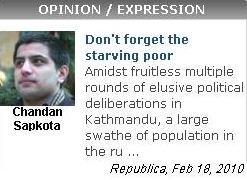 In my latest column, I discuss about the food crisis in rural Nepal. I focus on what should be done to reduce deficit food production and incidences of hunger in the rural areas.  Nepal should not only look for quick short-term fixes like food aid and subsidies. It needs to come up with a plan to prevent this recurring crisis in the long run. I propose a rural public works program akin to the NREGA model launched in India in 2006. (Thanks to Adnan Kummer for his help in editing this article!)

Amidst fruitless multiple rounds of elusive political deliberations in Kathmandu, a large swathe of population in the rural areas is either facing starvation or is in danger of encountering one soon. The rural economy is reeling under deficit food production even though more than 70 percent of the population depends on agricultural sector for livelihood. Deficit food production and increase in the incidence of hunger in rural areas are not uncommon. Meanwhile, concerted efforts by the government to tackle the root causes of deficit food production and to alleviate the incidences of starvation are uncommon. The policymakers are yet to realize that ignoring such a brewing crisis could wreak havoc not only economically but also socially.

Food crisis is acute in the mid- and far-western regions. In fact, last July, the UN World Food Program (WFP) reported that starvation in these regions is as severe as in Congo and Ethiopia. In rural Nepal, over 600,000 people are facing starvation every day and around two million will potentially experience the same fate in the coming days. The WFP is running out of resources to feed the hungry people. Landless agricultural wage earners are particularly hit hard. Production of major agricultural crops such as paddy, wheat, and pulses has nosedived. The country might face food deficit of over 400,000 metric tons this fiscal year, according to the Ministry of Agriculture & Cooperatives. The most isolated regions are facing high intensity of starvation and food deficit. This problem has to be deal with swiftly and with a decisive food security policy to address not only the immediate causes but also to prevent occurrence of such cases in the long run.

It is encouraging to see the donors and development agencies taking promising steps to address the short-term challenges. However, the same cannot be said about the government’s plan of action. It allowed export of lentil and pulses at a time when the domestic demand is far greater than domestic supply, leading to severe food shortage in the rural areas. It is also importing 50,000 metric tons of wheat from India. The government should have purchased food from the domestic private sector at the prevailing international price and supplied it to the regions facing food shortage. Note that prices of both pulses and lentil are already skyrocketing in the domestic market. In fact, due to supply constraints, prices of most food items are already going up.

Severe food crisis is not a new phenomenon: there were food crises in 1979-80 and 1982-83. There was a particularly serious one in 2007.The economy has never been self-sufficient in food production. Agricultural output has not kept pace with increasing demand and population growth rate. Worse, productivity growth has stalled at a very low level for a long time. These issues were never fully explored by previous governments for various reasons. First, the WFP and other UN agencies have been regularly providing direct food assistance to the starving people in rural areas. Second, the media hardly ever prominently featured issues associated with deficit food production, food crisis, and starvation in rural areas as it does with political, entertainment and economic issues. Third, the government kept allocating budget for fertilizer and seed subsidies regardless of efficiency, outcome, and sustainability of such programs. Fourth, lack of local elections and prevalence of civil war for almost a decade deprived farmers of their right to effectively raising their voices. Fifth, poor infrastructure and burgeoning corrupt bureaucracy impeded effective distribution of food.

Poor farmers were repeatedly left at the mercy of state subsidies and food aid funded by donors. This addressed immediate consumption needs but not long term issues related to sustainable production and productivity. The agricultural policies designed to reap political dividends distorted individual and market incentives. Perhaps, we should learn lessons from the successful struggle of India and Pakistan to be self-sufficient in food production amidst famine and starvation five decades ago. Thanks to the Green Revolution spearheaded by Norman Borlaug, who received the Nobel Peace Prize in 1970, and good food security policies, India and Pakistan became self-sufficient in food production in 1974 and 1978 respectively. There is no reason why Nepal cannot follow suit.

Lack of equitable land reforms, distribution and ownership of land, and unfavorable weather patterns are not the only causes of deficit food production and increase in incidences of starvation in far-western and mid-western regions.  A lack of government's attempt to seek alternative means to address these challenges is one of the main reasons. Studies have shown that 40-50 percent of public works budget in Nepal has been used for personal gains, resulting in massive misappropriation of resources. Additionally, replication of fairly successful programs, such as Churia Food-for-Work program launched in 1992 in Eastern Terai to address severe drought and declining production, has been disastrous due to over politicizing and excessive leakages. The Indian experience in dealing with drought and famine could provide valuable lessons not only to successfully target the most affected population but also to control leakages. There is a lot to learn from successful programs such as Maharashtra's Employment Guarantee Scheme (EGS) lunched in 1978 and Mahatma Gandhi National Rural Employment Guarantee Act (NREGA) lunched in 2006.

Replicating public works programs that are close to the NREGA model is essential to address four issues-- deficit food production, starvation, rural infrastructure and rural unemployment-- at the same time. Construction of local infrastructure could aid in enhancing productivity and reducing distressed migration. Apart from the job guarantee aspect, a program akin to NREGA model was funded by the World Bank and lunched in 2008. Unfortunately, it is slated to end this year. Nepal urgently needs public works programs of a much larger scale.

There is a big multiplier, i.e. investment of one rupee would produce an outcome worth more than one rupee, associated with these kinds of programs. If these programs are complemented with distribution of high yielding seeds that are resistant to inclement weather and provision of easy credit to farmers as was done in India and Pakistan in 1970s, food production would be higher and the multiplier stronger. Ensuring “fair” prices for agricultural goods produced by rural farmers would provide an extra incentive to seek better methods of farming by the farmers themselves. We also need to address infrastructural constraints in production and distribution of food.

It is high time the government launched a program to address the root causes of starvation and food deficit. Craving for food aid from the WFP and the donors every time horrors of starvation strike the population is not a sustainable solution to a recurring crisis. It is time to find a permanent long-term solution to food deficit and starvation in rural Nepal. Let us not forget the starving people.