[This blog post is adapted from Nepal’s Macroeconomic Update, August 2013, published by the ADB.]

Adversely affected by the unfavorable monsoon, the shortage of chemical fertilizers during the peak summer crops[1] planting season, continued slowdown in industrial activities and the delay in introducing a full budget, gross domestic product (GDP) growth dipped to an estimated 3.6% in FY2013, down from 4.5% in FY2012. The major contribution to overall GDP growth came from the services sector which contributed about four-fifths of the GDP growth, up from about two-fifths in FY2012, largely due to the rise in remittances-induced consumption demand. While agriculture contributed about two-fifths of the GDP growth in FY2012, it declined to less than one-fifth in FY2013 (Figure 1). The industrial sector’s contribution remained below one-fifth in the last three years, mainly reflecting the slowdown of manufacturing and construction activities. 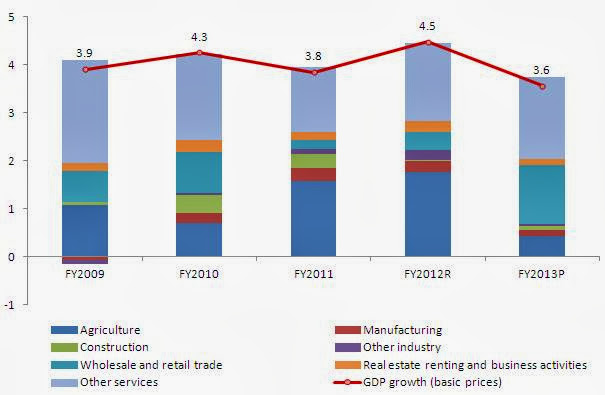 The agriculture sector, which comprises almost 35% of GDP and provides livelihood to about 76% of households, grew at a mere 1.3%, down from 5% in FY2012 and 4.5% in FY2011. Despite a good winter crop[2] harvest—resulting from the timely and favorable winter precipitation and availability of agriculture inputs— total cereal production dropped by 7.6% owing to the late and inadequate monsoon, and shortage of chemical fertilizers.[3] The production of paddy, maize and millet dropped by 11.3%, 8.3% and 3%, respectively. An increasing proportion of farmers are using chemical fertilizers for the production of mainly summer crops and to some extent for the winter crops. For instance, about 70% of paddy growers used chemical fertilizers in FY2011 compared to 66.4% in FY2004 (Figure 2). 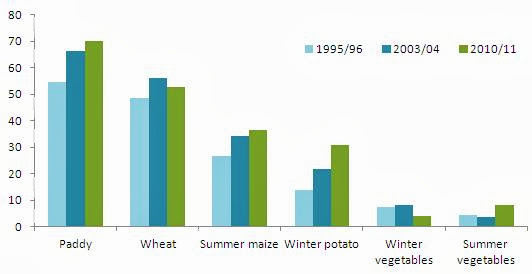 The industrial sector, which comprises a mere 15% of GDP, continued the lackluster performance, registering an estimated growth of 1.6%, down from 3% in FY2012 and 4.3% in FY2011. Within this sector, mining and quarrying, and construction grew by 5.5% and 1.6%, respectively. However, the growth of manufacturing, and electricity, gas and water declined to 1.9%, and 0.2%, respectively. Manufacturing activities have slowed mainly due to the long hours of power cuts, unfavorable industrial relations, persistent supply-side constraints and the rise in the cost of production due to increased prices of imported raw materials. Similarly, the lack of a timely and full budget, which severely affected construction related public and private capital expenditures, and the continued weak implementation capacity of public agencies led to the weak growth of construction activities, and hence, its weak contribution to GDP growth (Figure 1).

Despite a moderate deceleration of remittance inflows, the remittances-induced consumption demand propelled the services sector growth to an estimated 6%, up from 4.5% in FY2012. Within the services sector, wholesale and retail trade—whose share in GDP is 14.4%, nearly equal to that of the industry sector—grew sharply by 9.5%, up from 3.1% in FY2012. Hotel and restaurant activities grew by 6.8%, marginally up from 6% in FY2012, reflecting the sustained increase in tourist arrivals. However, the real estate sub-sector growth declined to 1.6% from 3% in FY2012, mainly due to its slow recovery after the slump in FY2011 and the lending cap (a maximum of 25% of total loans to real estate and housing) imposed by the Nepal Rastra Bank (NRB) on BFIs. Overall, the services sector activity grew faster than industrial and agricultural activities (Table 1).

On the expenditure side[5], consumption accounted for an estimated 90.7% of GDP, up from 88.5% in FY2012 and 85.5% in FY2011, reflecting the increasing consumption demand stimulated by the growing remittance income.[6] While capital formation hovered around an average of 37% of GDP, gross fixed capital formation (GFCF) has been around 21% of GDP. The private sector accounted for the largest share of GFCF (17.2% of GDP in FY2013). Despite the high investment figures, the impact on growth and employment is pretty nominal probably either due to the measurement errors or the hugely inefficient capital investment. Net exports jumped to a negative 28.5% of GDP in FY2013, up from the negative 23.4% of GDP in FY2012 (Figure 3), reflecting the massive rise in imports of goods and non-factor services—38.8% of GDP from 33.4% of GDP in FY2012. Exports of goods and non-factor services increased only marginally to an estimated 10.3% of GDP. While the high imports are supported by high remittance income, the slowing exports are a result of the persistent supply-side constraints affecting both production and competitiveness. 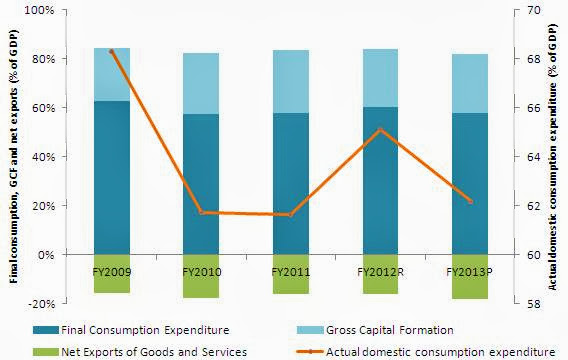 Gross domestic savings have declined to an estimated 9.3% of GDP from 11.5% in FY2012 and 14.5% in FY2011 (Figure 4). It indicates that a majority of the residents’ income is spent on consumption, which is mostly met by imported goods. Meanwhile, the high national savings (38.4% of GDP in FY2013) reflects the high remittance inflows. It has also contributed to a positive savings-investment gap (computed as the difference between gross national savings and gross capital formation) in the last two years. Though per capita GDP increased to $713[7] in FY2013 from $709 in FY2012, it is still lower than $720 in FY2011. The fluctuation in per capita GDP is partly attributed to the depreciation of Nepali rupee against the US dollar. The size of Nepal’s economy expanded to an estimated $19.4 billion in FY2013, marginally up from $19 billion in FY2012. 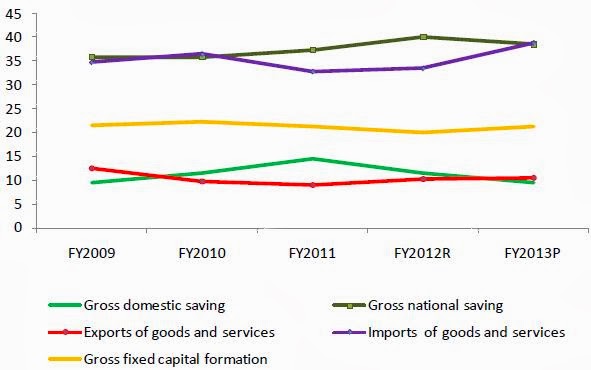 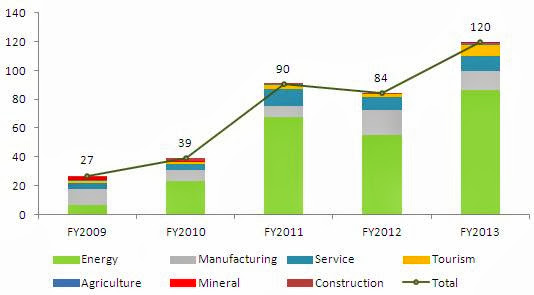 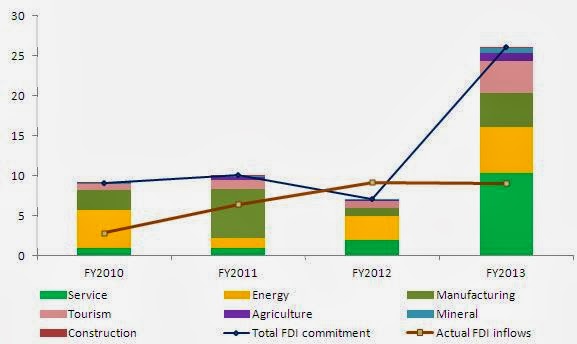 The outlook for FY2014 is more optimistic than that for FY2013. The adequate monsoon and supply of chemical fertilizers[8] during the past few months are expected to boost agriculture production. According to the Ministry of Agriculture Development, the agriculture production, especially summer crops, is expected to increase sharply as a result of the active pre-monsoon and normal monsoon rains, and the adequate supply of agricultural inputs, especially chemical fertilizers. About 92% of paddy fields have been planted this summer. It was 64% in FY2013. Approximately 80% of total rainfall occurs between June and September. Furthermore, the timely full budget for FY2014 is expected to give added momentum to capital expenditure, especially construction sector activities, while the expected robust remittance inflows will continue to support services sector growth. Based on these developments and assumptions, GDP growth (at basic prices) is forecast at 4.5% in FY2014. Over half of the contribution to this growth rate is expected to come from the services sector, followed by about two-fifths from agriculture. In view of the long-term nature of the structural constraints and the likely distractions in the run-up to the upcoming elections and immediately after the elections, the industry sector is expected to contribute only marginally to GDP growth (Figure 7). Note that the budget and monetary policy have set an ambitious GDP growth target of 5.5% for FY2014 primarily on the assumption of a high agriculture sector growth rate. Meanwhile, the approach paper to Three Year Interim Plan (FY2014-FY2016) has set an average annual GDP growth target of 6% by mainly assuming services sector growth of 7%. 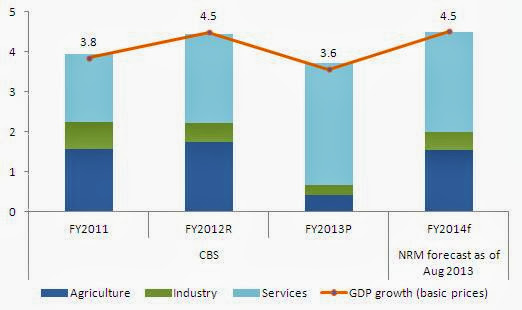 [5] The GDP by expenditure figures are prone to measurement errors as change in stocks is computed residually, which also includes statistical discrepancy/errors. It was an estimated 16.6% of GDP in FY2013. A large residual indicates that a significant portion of the GDP is either unexplained or could not be directly attributed to its components, i.e. consumption, investment and net exports.

[8] Though the AICL supplied only about a quarter of the total fertilizer demand, farmers did not face a shortage during the planting season. This is probably due to imports from India by the private sector and individuals through informal channels.

Posted by Chandan Sapkota at 12:19 PM No comments: