Trade distortions, the Doha Round, and food price volatility

Kym Anderson has an interesting piece about the relationship between trade distortions and food prices. He argues that sudden rise in global food prices are driven by major policy shifts like tariffs and subsidies, leading to a tit-for-tat behavior by countries that produce them.

Trade-related policies contribute to agricultural market volatility and the volatility around the long-run-trend terms of trade slows national economic growth, he argues. The main point of the piece: continue with agriculture liberalization. Here is a similar argument. The disagreements on agriculture liberalization has been holding up Doha for eight years now. The author says that the more barriers in this sector, the more volatility. So, seeking a Special Safeguard Mechanism (SSM) is not good to reduce volatility. [But, how can the Doha Round pass without addressing these issues?]

The price hike of 2008 was also partly a consequence of policy changes in the US and EU, namely their decision to subsidise biofuels and set mandates/targets for their use domestically in response to rising fossil fuel prices. It led other governments to impose food export restrictions to insulate somewhat their consumers from the price rise, which pushed international food prices even higher and, domino-like, drove more exporting countries to follow suit. Some food-importing countries also lowered temporarily their import tariffs, to reduce the rise in their domestic food prices. 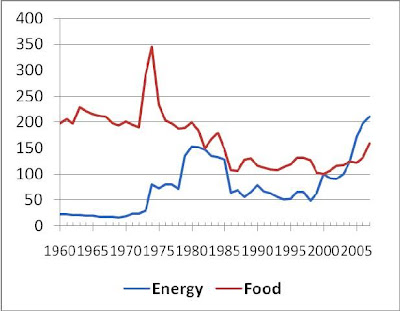 The parallel movement of food and energy prices is consistent only after the previous half-century. The author finds that the coefficient of correlation between 1960 and 1999 is -0.18, compared with 0.84 for 2000-07. The comparison may not be quite accurate because of the timeframes between these two periods but the high and positive R-squared value for 2000-07 gives us some information about the way food and energy prices move (in tandem). Note that agriculture constitutes around 3% of global GDP, 6% of global trade, and 8% of global exports (exports of non-farm primary products is 31% and all other merchandise exports is 25%).

The good news is that many developing countries have reduced hugely their anti-agricultural export policies, and even some high-income countries have lowered their trade-distorting assistance to their farmers – albeit replacing part of it with more-direct assistance to farmers that are only somewhat decoupled from production.

The argument against SSM and giving some policy space to deal with contingencies in the developing countries are not consistent with the evolving consensus among experts that such measures need to incorporated in the Doha Round. Without these measures it would be hard to deal with national crisis triggered by disruptions in agriculture production and trade. For instance, what happens if there is extended drought in a country and producers chase after higher priced markets abroad-- this will lead to starvation. To check the population from starving, some contingency measures are essential. Some hooks to full agriculture trade liberalization is required for the survival of the Doha Round.

Even a recent WTO World Trade Report emphasized for inclusion of “trade contingency measures”. The report argues for “trade contingency measures” that would give some policy maneuver for countries to deal with domestic pressure to prop up domestic markets affected by the crisis. The contingency measures discussed in the report include safeguards measures, anti-dumping and countervailing measures, the re-negotiation of tariff commitments, the raising of tariffs up to their legal maximum levels, and the use of export taxes. These are needed because too little flexibility in trade agreements may render trade rules unsustainable.

Martin Wolf dismisses the idea that liberalization is the only answer:

The political focus of the Doha round on lowering high levels of protection is largely irrelevant. The focus should, instead, be on shifting the farm sector towards the market, while cushioning the impact of high prices on the poor.

The move towards genetically modified food in developing countries is as inevitable as that of the high-income countries towards nuclear power. At least as important will be more efficient use of water, via pricing and additional investment. People will oppose some of these policies. But mass starvation is not a tolerable option.

Posted by Chandan Sapkota at 11:43 AM No comments: