The other side of the crisis II

Michael Clemens gives clear perspectives on why hiring restrictions for those on H1-B visas is bad for the US economy. A clear-cut piece!

First, the lesson of America’s long history is that there is simply no tradeoff between immigration and the job opportunities of people already here—even in times of crisis. Let’s dump the soundbites and stare directly at our experience as a nation. Below is a graph I created from primary statistical sources listed at the end of this post. It shows U.S. immigration since 1880, superimposed on a graph of U.S. unemployment from 1890 through two weeks ago: 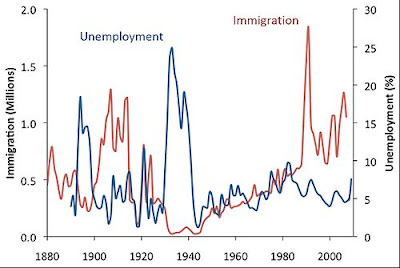 These numbers are remarkable. Collapses in immigration utterly failed to keep Americans at work during the major depressions of the 1890s and 1930s. Enormous surges in immigration accompanied falling unemployment in the early 1900s and after 1981. If you still think that the big picture of U.S. history involves any sort of tradeoff between immigration and unemployment, it’s time to re-envision our stunningly dynamic, flexible economy. Non-partisan research from thinktanks and academia shows that highly skilled workers, in particular, create new jobs for others when they enter the United States—both by helping existing companies grow (pdf) and by starting new companies. Bill Kerr of Harvard Business School also shows that immigrants play an important role in U.S. innovation in science and technology, finding in a recent study “that in periods when H-1B visa numbers went down, so did patent applications filed by immigrants [in the U.S.]. And when H-1B visa numbers went up, patent applications followed suit.”

Second, the two Senators responsible for the anti-immigration provision of the stimulus bill—Chuck Grassley and Bernie Sanders—didn’t write it to help American workers through the crisis. Both of them represent states (Iowa and Vermont) where hardly any of our highly skilled foreign workers go. Grassley was working hard to restrict the number of high-skill workers entering on H-1B visas, with help from Sanders, back in 2007. Back then there was not a glimmer of the layoffs we’ve seen recently. Back then the economy was so hot that tech companies were being starved of qualified workers by caps on H-1B visas, caps that Bill Gates pleaded Congress to raise. Today’s crisis has simply given longtime nativists a cherished chance to impose their will on other people by force. In this case those other people are intelligent and highly skilled workers, mostly from developing countries, whose unlucky birthplace bars them from spectacularly high-paying opportunities that nativists prefer to see as their exclusive and heaven-ordained right.

Third, restricting access to the United States for smart, highly educated, energetic workers is bad for development. International connections among skilled workers have been important to the engines of growth and poverty reduction that have arisen in several developing countries over the past few decades. Sociologist AnnaLee Saxenian has documented the myriad unpredictable ways that skilled Indian and Chinese workers abroad helped high-tech industries to form in their home countries, thereby raising the returns to education even for people who don’t wish to leave. The same Bill Kerr mentioned above has shown that skilled migrants abroad raise knowledge transfer to, and manufacturing output in, developing countries of origin. A growing research literature suggests that highly skilled workers abroad can generate new trade and new investment for developing countries, and even help foster democratic institutions in developing countries—to say nothing of the money they send home, often to families whose economic deprivation cannot be imagined by most Americans in their darkest moments. If you believe that restricting skilled-worker migration is a positive force for development, pick a ghetto or impoverished rural county in the United States and ponder the economic and ethical consequences of trapping smart young people in that place with forcible travel restrictions.

It’s not surprising that the U.S. is sprouting more protectionists in this time of crisis. Fighting this destructive tendency is all the more noble when times are tough. As the crisis continues, let us not take another step down the lose-lose road of isolation.  Rather, let us see this moment in history as an opportunity to reform broken immigration systems in the rich world, recognizing that pro-development migration policies, some of which I outline in my chapter on migration in The White House and the World, will make poor and developed countries alike more prosperous in the end.

See this one as well.

Posted by Chandan Sapkota at 11:32 PM No comments:

Hausmann on the global financial crisis

Hausmann has a nice piece on the VoxEu website about the global financial crisis and how global and regional multilateral institutions can help the developing countries cope with the fallout of this crisis on their economy (basically, by stepping up lending and widening their scope and role). He uses the fan belt analogy (I think this one is his favorite as he uses this one in the growth diagnostics studies as well)!

When the fan belt of the car breaks, the engine overheats, seizes, and stops. A new fan belt is no longer enough for a solution. If the Wall Street is the belt, Main Street is the engine. Since the engine has seized, even fully capitalised banks will be weary to lend into a downturn, and firms and households would be unwise to borrow, even if credit was available. Credit crunches often lead to recessions, but the eventual recovery has never been lead by credit, as Calvo, Izquierdo and Talvi (2006) have shown for emerging markets.

A more sustainable complementary alternative is to use the super-borrower capacity to reflate the global economy and to reestablish financial links globally. This can be done in several ways.

First, multilateral development banks should be recapitalised –by issuing guarantees in the form of callable capital – allowing them to raise funds in global capital markets to on-lend to the developing world.

Second, the IMF should also be recapitalised, possibly through an issuance of SDRs, so as to make sure that the organisation has more than enough funds to help reconnect countries to finance.

See my earlier discussion about the fallout of the global financial crisis on the developing countries here.

Posted by Chandan Sapkota at 7:55 AM No comments:

Impact of the financial crisis on the developing world 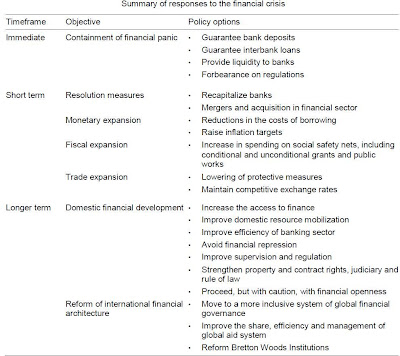 The International Monetary Fund (IMF) expects growth in world trade to decline from 9.4 per cent in 2006 to 2.1 per cent in 2009. The expected declines will come through a combination of lower commodity prices, a reduction in demand for their goods from advanced economies and less tourism. Moreover, the International Labour Organization (ILO) predicts that unemployment could rise by 20 million across the world and that the number of people working for less than the US$2 per day poverty line will rise by 100 million.

The developing countries will not have to worry that much about containment of financial panic in the immediate term because the epicenter of the crisis was in the Wall Street. However, they will have to take on the short term measures as outlined above in the chart. Recapitalizing banks and encouraging merger and acquisition would help consolidate the financial sector. This should be coupled with expansionary monetary policies such as raising inflation targets (but don’t adhere to strict inflation targeting as it binds monetary tools required to respond in these kind of situation) and reducing costs of borrowing (by decreasing lending rates). The fiscal response has to be bigger and bold with an increase in infrastructure spending (it is needed anyway because of severe short supply of infrastructure), expansion of social safety nets (also conditional cash transfers) and spending on education/human resources. On the trade side, the developing countries should lobby for more open markets abroad and also keep their markets open (to be fair to all, there should not be protectionist moves).

See my earlier opinion piece on the impact of global financial crisis on the Nepali economy here. Also see this.

Posted by Chandan Sapkota at 4:23 AM No comments:

What we need is both stimulus and long-term investments that accomplish two objectives simultaneously with one global economic policy response – a policy that addresses our urgent and immediate economic and social needs and that launches a new green global economy. In short, we need to make “growing green” our mantra.

Second, we need “pro-poor” policies now. In much of the developing world, governments do not have the option to borrow or print money to cushion the devastating economic blows. Therefore, governments in industrialised countries must reach beyond their borders and invest immediately in those cost-effective programmes that boost the productivity of the poorest. Last year, food riots and unrest swept more than 30 countries. Ominously, this was even before September’s financial implosion, which sparked the global recession that has driven a further 100m people deeper into poverty.

This means increasing overseas development assistance this year. It means strengthening social safety nets. It means investing in agriculture in developing countries by getting seeds, tools, sustainable agricultural practices and credit to smallholder farmers so they can produce more food and get it to local and regional markets. Pro-poor policy also means inc­reasing investments in better land use, water conservation and drought-resistant crops to help farmers adapt to a changing climate, which – if not add­ressed – could usher in chronic hunger and malnutrition across large swaths of the developing world.