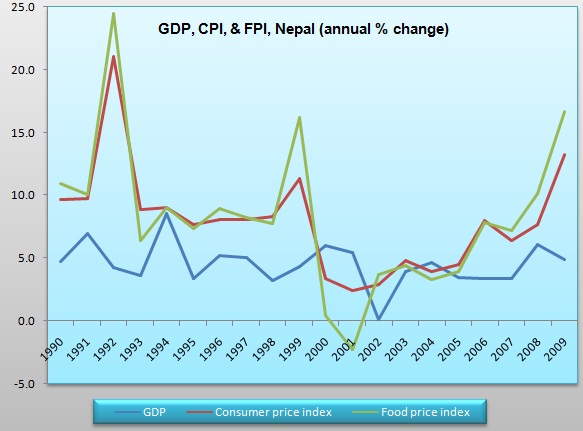 Food prices are fast outstripping overall general prices (CPI). It will continue to drag down real GDP growth and real per capita GDP. Globally, food prices have already shot up the roof compared to the mid-2008 level, when food importing countries faced serious problems. As of now, Nepal is a net food importing country and further rise in food prices would put more pressure on CPI, exports, and growth. (Data sourced from here (.xls)).

The chart below shows rise in global food prices. 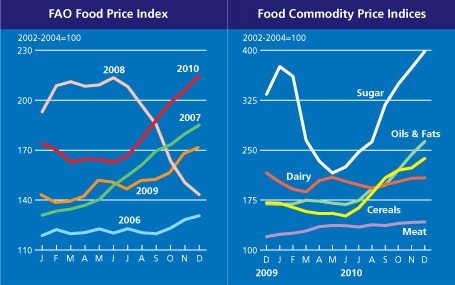 The FAO Food Price Index has surpassed the upper bound reached in 2008. Commodity-wise, price of sugar has been spiking since May 2009. Similarly, prices of cereals and oil & fats are also going up. Price of meat is stabilizing but still is higher than in December 2008. The price of dairy is reaching the level reached in December 2008.

After reaching peak in 2008, food prices were coming down due to good harvests for most basic food items. But, severe weather in some of the world’s biggest food exporting countries damaged harvests and led to another spike in December 2010. Flooding in Pakistan, Australia, and Canada, and drought and fires in Russia have affected crops in 2010 and even in 2011. Wheat production is going to come down this year. It will push prices even higher. Speculators are also helping to jack up prices.