They did it again! In fact, they did, have been doing, and will do it repeatedly till they shed off militant mentality!!

The Maoists’ war against the media is reaching its apogee. The Maoists, who are currently running the government, affiliated trade union stormed the building of Himal Media, which publishes the popular Nepali Times and Himal Khabarpatrika, and beat up the journalists and vandalized their office. The media house has been particularly critical of the Maoists’ excesses, especially its trade union and militant youth organization named as YCL. These two extralegal organizations lack discipline, have been terrorizing industries and business executives at a time when the whole industrial base in grounded due to domestic inefficiencies and global recession, and are pretty much above the law.

Several journalists were injured when the police baton charged a peaceful rally against the excesses of the Maoists’ affiliates. The UN, human rights organizations, civil society, and other media houses have condemned the supererogatory acts of the Maoists. 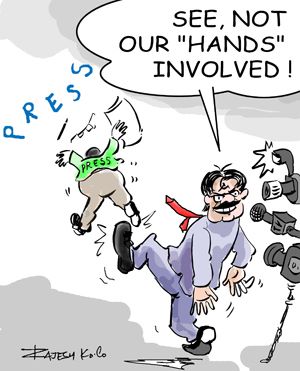 It is ironical that the Prime Minister Prachanda, the chief of Maoists party, who parrots media freedom and rule of law, has declined to admit that his party’s militant miscreants were responsible for the heinous act against the media. This is surprising because almost all the reports that came out yesterday clearly mentioned two names closely associated with the ruling Maoists-affiliated unions and personnel. The government’s spokesperson and communication minister says he is oblivious to the marauding act of its cadres (all the major newspapers published news condemning the act…does the communication minister follow newspapers?). What a HYPOCRISY?

Get it straight: The Finance Minister is parroting high revenue and growth for the country. However, he fails to realize that foreign investors are scared to invest in Nepal due to YCL’s and the Maoists Unions’, who have demanded higher minimum wage and better working conditions that is beyond affordability given razor thin profit margin of the industries. Many garment firms have already disappeared and the few remaining are on the verge of closing down due to labor problems and lack of price competitiveness. Imposing a higher minimum wage means increase in cost of production, which will further erode price competitiveness and could potentially lead to wiping off of the whole garment and textile industry.

Furthermore, if exports and imports decline, then the expected revenue collection would be a day-dream. One can imagine how much loss the country will have to endure do to the crisis. The ADB has estimated that one day of industry closure (due to bandhs and industry closures) costs at least $100,000 to the state coffers. Add the 10-plus hours of load-shedding every day and its impact on the manufacturing sector, you will discover that the total loss would be much more than the one hundred thousand dollars. My preliminary estimation points this figure to over $300,000 every day.

I can go on and on about the effect of the YCL’s stupidity and belligerent trade unions on the national economy but due to interest of time, I will save further discussion for later posts.

The bottom-line: the imbecility and lack of discipline of the YCL, and moronic attitudes of the trade unions, especially their unjust demands given the fragility of our industries are costing the nation dearly. The revolution in the name of worker’s welfare is nothing more than a politically motivated, opponent-smearing, and populist campaign implicitly sanctioned by the Maoists party itself. No where in the world has a nation progressed by waging a war against the independent media and the private sector. This is a perfect recipe for economic and political downfall. Even the elite planning commission of the nation is politicized. The Maoists government is making probably the biggest policy blunder in the history of the country by politicizing appointment in the NPC, which is supposed to be filled with experts conversant with the economic condition of the country. No words to describe their double standard behavior!

STOP taking advantage of the working class for your own benefits. STOP the excesses. STOP the madness. DISBAND the private militia. CRIMINALIZE the politically indoctrinated trade unions whose demands go well beyond the accepted norms. CEASE mobilization of belligerent youths to promote Maoists interests. STOP messing up with the independent media and the private sector.

Posted by Chandan Sapkota at 6:33 AM 2 comments: