Is Nepal gaining from becoming a member of the WTO? 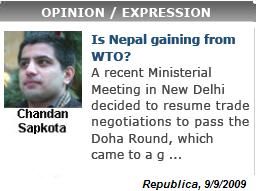 In my latest op-ed, I look at how Nepal has fared since it joined the WTO in 2004. Quite surprisingly, overall trade has declined and employment situation in the manufacturing sector became worse. May be Nepal should focus more on the nearby markets where trade takes places the most (say, South Asian Free Trade Agreement-SAFTA) rather than eying markets in developed countries.

Is Nepal gaining from WTO?

A recent Ministerial Meeting in New Delhi decided to resume trade negotiations to pass the Doha Round, which came to a grinding halt in July last year over differences concerning special safeguard measures and agricultural subsidies offered by rich nations. The WTO Director General Pascal Lamy hopes that a Doha deal is doable by 2010. The Doha deal is expected to not only help countries expand trade but also help developing countries achieve development goals.

An increase in trade of goods and services in the international market has helped many countries achieve rapid economic growth. In the context of Nepal, we need to inquire what benefits we would have from the Doha Round in particular and the WTO in general. Nepal joined the WTO on April 23, 2004, becoming the first LDC to join the trading bloc through full working party negotiation process. So far, there have not been discernible benefits – in terms of growth, employment, poverty reduction and industrial production – from joining the WTO. In fact, exports have declined, imports increased and the manufacturing sectors, especially the ones that weighted high in the exports basket, have been going downward.

It is time to evaluate the progress made since joining the WTO and the possible impact on growth and employment due to planned reduction in tariffs in the coming years. No study has been done so far to figure out how much would Nepal gain by joining various trading blocs and under what trading scenario (tariff and subsidy rates) would Nepal lose and gain in what kind of sectors? What would be its impact on employment, which should be one of the main barometers for evaluating long-term success of trade?

It is surprising to note that trade (as a percentage of GDP) has declined since 2004, quite contrary to what is expected after joining trading blocs. It was 46.14 percent in 2004 but 45.28 percent in 2007. In the six years before joining WTO, on average, trade was 52 percent of GDP. In post-WTO period, on average, trade was 46 percent of GDP. Imports have been consistently rising since 2004 but exports have been decreasing. In FY 2003/04, exports (as a percentage of GDP) were approximately 16.7 percent whereas it was 12.1 percent in FY 2007/08. However, imports in FY 2003/04 were 29.5 percent of GDP but it was 32.7 percent in FY 2007/08. This means trade deficit is ballooning (increased by 23.3 percent last fiscal year). Had it not been for increasing remittances, balance of payments would have been negative. The investment situation also is not that encouraging. In FY 2007/08, gross investment (percentage of GDP) was 29.7 percent, down from 24.5 in FY 2003/04. Similarly, there has not been much change in foreign direct investment.

This means that even after joining the WTO, the country has failed to reap potential benefits; instead, it is at a disadvantage in terms of export promotion, public investment to prop up key industries and employment generation.

There has been no change in production structure and a shift to new productive activities is not happening. The top five export items – carpets and rugs, garments, jute goods, pulses and raw jute and jute cuttings – have not changed. Almost 80 percent of the exported items are manufactures and 60 percent of total export items go to India. The other top export destinations are the US, the EU, China and Bangladesh. Meanwhile, major import destinations are India (53 percent), China, the EU, Singapore and Malaysia. Of the total imports, 65 percent is manufactures, 15 percent agricultural products and the remaining fuels and mining products.

The rate of increase in volume of trade is not matched by the disappointing progress in economic growth rate and employment generation. The average growth rate in the post-WTO period is 3.5 percent while the average growth rate in trade in the same period is 46 percent. Worse, the employment level has been miserable in the manufacturing sector. Generally, low-skilled manufacturing activities are expected to increase along with a surge in employment in these sectors after joining the WTO. This is true for developing countries where wage rate is low and there is abundance supply of labor. However, in Nepal, the main export industry (garment and carpet) is close to being grounded now, which has already shed almost 90 percent employment and less than 20 firms are in operation.

Two main problems bedevil the exports sector: A lack of price and quality competitiveness. The former is a linked to exogenous factors such as road obstructions, high transportation costs, industrial strikes by politically-motivated trade unions and high cost of procurement of intermediate goods. All of these increase the cost of production. The second one is linked to endogenous factors like unwillingness of the export-based firms to explore innovative means of production and shift production to more productive activities with potential for comparative advantage. It is partly associated to their habit of excessively relying on trade under preferential agreements. A guaranteed low tariff and quota free access to markets abroad led to depression of incentives to innovate by the existing exporters. As per WTO agreement, when the quota system was phased out in 2005, the export-oriented firms went bust because other international competitors started eating up previously guaranteed market share.

The government has not been able to facilitate linkages between productive activities by reducing coordination failures. There are virtually no production and capital linkages between the existing goods that Nepal exports with comparative advantage and those that it could potentially do in the future. The capital and human resources of one industry are not readily available or useful to other industries, leading to a lack of synchronization in innovation of new goods and services.

The process of innovation and synchronization of similar industrial activities have not been made any easier by the government. The talks of establishing special economic zones (SEZ), which comprise of export processing zones, special trading zones, tourism/recreation and simplified banking facilities, have still not materialized due to political bickering and a lack of effective lobby from the industrial sector. The government has been planning for years to establish SEZs in Bhairahawa, Birgunj, Panchkhal and Ramate. Typically, the firms based in SEZs are responsible for producing quality goods and for exporting over 70 percent of their total production. The government has failed to give enough incentives in the form of tax credit, human resource training and technical expertise to the industrial sector.

The stalemate in production structure in the country even after six years of joining WTO is disappointing. No one knows how much will Nepal gain or lose if the Doha Round is completed by 2010. The government and think tanks need to analyze gains and losses under different WTO trading scenarios, especially tariffs reduction and subsidies elimination. Since more than half of the trading activities take place with India, it makes sense to focus on opening up markets for more goods and services between India and Nepal, than with the rest of the world. Also, given the increasing volume of trade among the SAARC members, it might be prudent to seek trading opportunities under much more liberal terms with SAFTA members than hoping to reap far-fetched benefits under the WTO regime. 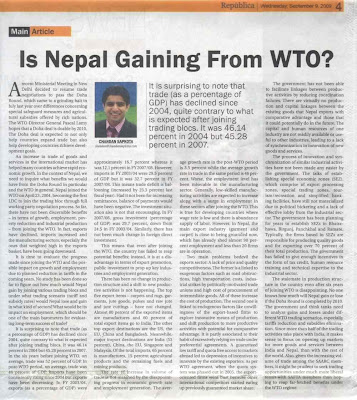 Posted by Chandan Sapkota at 10:30 AM No comments:

The World Economic Forum (WEF) has published its annual global competitiveness report, which ranks countries based on how competitive their economies are (Global Competitiveness Index). This time the US fell to second place, overtaken by Singapore as the most competitive nation.

The GCI is based on 12 “pillars of competitiveness”, providing a comprehensive picture of the competitiveness landscape in countries around the world at all stages of development. The pillars include Institutions, Infrastructure, Macroeconomic Stability, Health and Primary Education, Higher Education and Training, Goods Market Efficiency, Labour Market Efficiency, Financial Market Sophistication, Technological Readiness, Market Size, Business Sophistication,and Innovation.

Here is a list of the top ten competitive nations:

Posted by Chandan Sapkota at 10:28 AM No comments: