A lot has already been written about remittances in Nepal. Below I present two charts showing bilateral remittance inflows in 2011 and the total monthly inflows to Nepal over the years. All data sourced from the World Bank’s database and this latest brief. 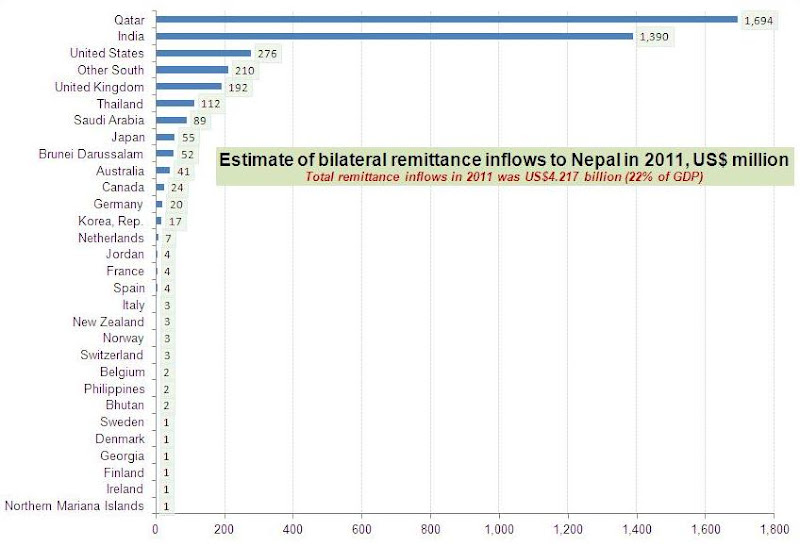 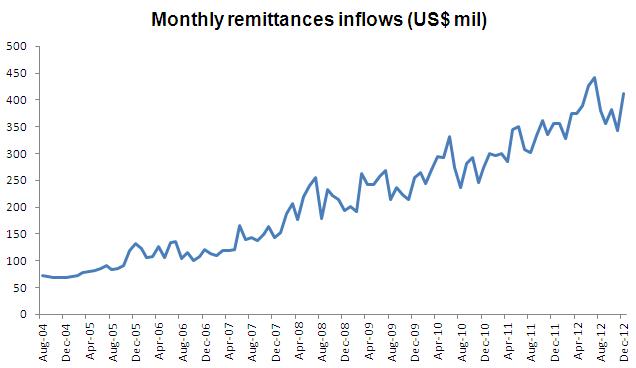 Remittances have been crucial in supporting services sector growth, which then affects overall economic growth. The expansion of services sector to over 50% of GDP is partly attributed to the rise in consumption demand backed by remittances. Its impact is quite visible in sectors such as real estate and housing, financial intermediation, retail and wholesale trade, transportation and communication, hotels and restaurants, and education. Similarly, it has ensured external sector stability by pushing current account and balance of payments in surplus despite ballooning trade deficit. Had it not been for remittances, Nepal would not have been able to afford such a high level of imports (around 25% of GDP). Foreign exchange reserves contribution by remittances is about 63% (24% of GDP). Gross national savings are also high (35% of GDP).

Meanwhile, it has supported revenue mobilization, with about 70% of tax revenue coming from customs duty and consumption tax (consumption fueled imports supported by higher purchasing power due to high remittances).

At the household level, the decline in poverty and inequality (Gini coefficient based on consumption) is largely attributed to increasing remittances, which 56% of households received in 2011. Household consumption is primarily financed by remittances (about 79% of remittance is used for consumption purpose). Similarly, the extra boost to income from remittances has enabled households to send children to private schools and afford better healthcare services.

At the institutional level, it has fostered policy complacency as policy makers do not have to do much to balance the macroeconomy or reduce poverty as it is automatically done by remittances. Unfortunately, it is leading to a ‘vicious policy cycle’—high inflow of remittances is exerting low pressure to improve policy weaknesses, which then is leading to inadequate investment climate reforms and low private investment. It leads to subdued growth rate with limited job opportunities, forcing more migration and more inflow of remittances.

The biggest risk to Nepal’s economy is to sustain this process. Given the lackluster policy attention devoted to this issue, it is unlikely that the policymakers will do anything substantial to address the issues in the near future. Nepal needs to channel remittances to productive usages, especially to finance long term development needs such as infrastructure, urban development and municipal services. The main challenge for the government, private sector, and development partners is to find out a way to decrease remittance income going to consumption and channel it to productive usages. As of now, only 2.4% of remittance income of a household is used for capital formation.
Posted by Chandan Sapkota at 2:17 PM No comments: