This is adapted from Macroeconomic Update, August 2015, Vol.3, No.2 (executive summary here, and FY2016 growth and inflation outlook here). It presents is the composition of Nepal’s outstanding internal and external debt. The Macroeconomic Update includes FY2015 update on real, fiscal, monetary and external sector, and growth and inflation outlook for FY2016. It provides a comprehensive macroeconomic assessment, including fiscal sustainability, after the April 25 earthquake.

The persistence of excess liquidity throughout the year pushed short-term interest rates mostly below 1.0%, although the rates were higher after starting February 2015 compared to the corresponding period in FY2014 (Figure 1). The 91-day treasury bills weighted average rate was 0.0004% in mid-August 2014, which jumped to 0.17% in mid-July 2015 and averaged 0.43% in FY2015, higher than 0.13% in FY2014. Similarly, inter-bank rate increased from 0.15% in mid-August 2014 to 1.01% in mid-July 2015, and averaged 1.06% in FY2015, much higher than 0,22% in FY2014. It indicates that the short-term liquidity management measures deployed by the NRB worked in lowering down excess liquidity. However, the persistent and recurring excess liquidity has to be sustainably resolved by address overall investment climate and structural issues in the banking sector. 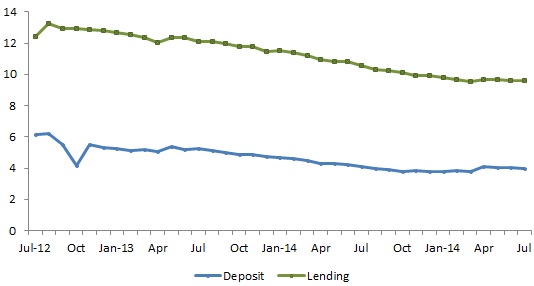 The cash reserve ratio (CRR), which is the minimum mandatory deposits that BFIs needs to hold as reserves either in cash or as deposits with the central bank and is usually used as one of the tools to achieve monetary policy goals, has remained unchanged since mid-August 2014. The present CRR for commercial banks, development banks and finance companies is 6.0%, 5.0% and 4.0%, respectively (Figure 3). The bank rate and standing liquidity facility have been kept unchanged at 8%. 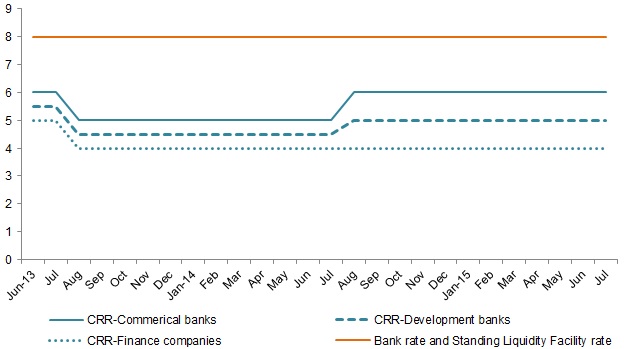 Meanwhile, the commercial banks’ have comfortably satisfied the capital adequacy ratio (CAR) and net liquidity requirements. CAR of commercial banks stood at 11.69%, which is 0.69 percentage points higher than the minimum 10% CAR and 1% buffer requirement. Similarly, credit to deposit ratio stood at 77.8% against a maximum limit of 80% and net liquidity stood at 31.8% against the minimum 20% requirement, indicating that there is still room for commercial banks to expand credit and reduce their excess liquidity (Figure 4). Non-performing loans declined to 2.68% of total loan by mid-June 2015 from 3.01% in mid-October 2014. Average productivity sector lending (agriculture, energy, tourism, and cottage & small industries), was 21.88% of total credit by mid-June 2015. Credit to agriculture and energy sectors alone stood at 13.24% of total credit by mid-June 2015. 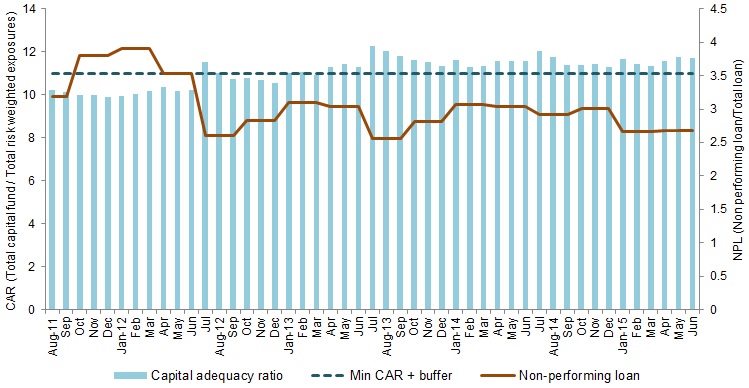 Posted by Chandan Sapkota at 11:53 AM No comments: