UNCTAD bats for the role of government in development

On the eve of UNCTAD XIII in Doha, Qatar from April 21 to April 26, UNCTAD released a statement strongly defending the role of “developmental state”. The UNCTAD has been under pressure from developed nations for criticizing the finance-driven globalization (FDG) model and calling for an overhaul of the system to move to development-led globalization (DLG).

The report, titled "Development-led Globalization: Towards Sustainable and Inclusive Development Paths," suggests that FDG has led to uneven, unstable and unfair outcomes. It outlines an agenda for DLG based on three pillars: enabling developing countries to mobilize domestic resources, strengthen productive capacities and share the gains in an equitable manner; creating more robust multilateral structures for collective responses to upcoming challenges, such as taming finance and promoting investment-led responses to climate change; and strengthening regional ties, including through South–South cooperation, to enhance stability and open new growth opportunities.

“The term finance-driven globalization characterizes the dominant pattern of international economic relations during the past three decades," the report says. "This is intended to convey the idea that financial deregulation, concerted moves to open up the capital account and rapidly rising international capital flows have been the main forces shaping global economic integration. […] Financial markets and institutions have become the masters rather than the servants of the real economy, distorting trade and investment, heightening levels of inequality, and posing a systemic threat to economic stability.”

The declaration, noting that LDCs currently account for only 1 per cent of international trade and that they attract foreign investment mostly to their extractive industries – which tend to create few jobs and tend not to lead to broader domestic economic development -- says that “efforts to build the developmental State” are the “key to drive economic growth.”

“We underline the importance of the balanced role of the State and market considerations, where the State designs policies and institutions with a view to achieving sustainable and inclusive economic growth as well as creates an appropriate enabling stable, transparent, and rules-based economic environment for the effective functioning of markets,” the declaration reads.

The document goes on to urge redoubled efforts by “trading and development partners, including developing countries that are in a position to do so” to support the LDCs in their efforts to expand, diversify, and fortify their economies and in their efforts to meet the United Nations Millennium Development Goals (MDGs). The MDGs include such targets are halving extreme poverty by 2015.

The declaration requests that such assistance “should go beyond ODA (official development assistance) to include, in a holistic manner, transfer of technology and know-how as well as building technological capacities and innovation in our countries.” It also urges industrialized countries to meet internationally established targets for ODA.

The concept of the developmental State goes against much international economic orthodoxy of the past few decades. The prevailing approach has called for governments to back off, contending that free markets then are liberated to spur economic growth directly. Several UNCTAD reports in recent years have charged that this approach, often called neoliberal economics, has not worked. In recent UNCTAD reports, including the Least Developed Countries Report 2011, the organization has advocated that the governments of poor countries take steps to encourage economic growth that will be stable, long-lasting, and likely to expand employment.

The LDC Ministerial Declaration also echoes UNCTAD’s stress on expanding LDCs’ productive capacities – that is, the abilities of their economies to produce broader varieties of goods, and goods of greater sophistication. UNCTAD has said in recent years that building productive capacity creates more and better paying jobs and leaves impoverished nations less vulnerable to historically volatile international prices for commodities such as raw natural resources and basic agricultural goods.

The LDC declaration further calls on donor countries to “support the commodity sectors of our countries, including through commodity diversification and value addition,” to enable LDCs “greater participation in global value chains on an equitable basis as a way to promote sustainable market-driven growth.”

And the document requests that something be done to “ease the burden of demanding quality and delivery standards” for LDC exports seeking to enter developed-country markets.” As trade barriers have fallen in recent years, LDCs have expressed concern that rich nations have been setting the bar for entry higher through health and quality standards LDC producers often cannot meet.

Among requests the declaration makes of UNCTAD are that the organization “undertake studies to help the LDCs better understand and address the factors that may be holding back their efforts to achieve the MDGs;” that it “assess the development effectiveness of aid;” and that it build on recent work to “advance the conceptual and analytical framework on the need for building productive capacities in LDCs.”

Posted by Chandan Sapkota at 10:17 PM No comments:

Migrant population has drastically increased in the past decade—so has people leaving each year and remittances inflows each year. Slowdown in economic activities, impact of insurgency and low job opportunities are clearly reflected in the figures below. 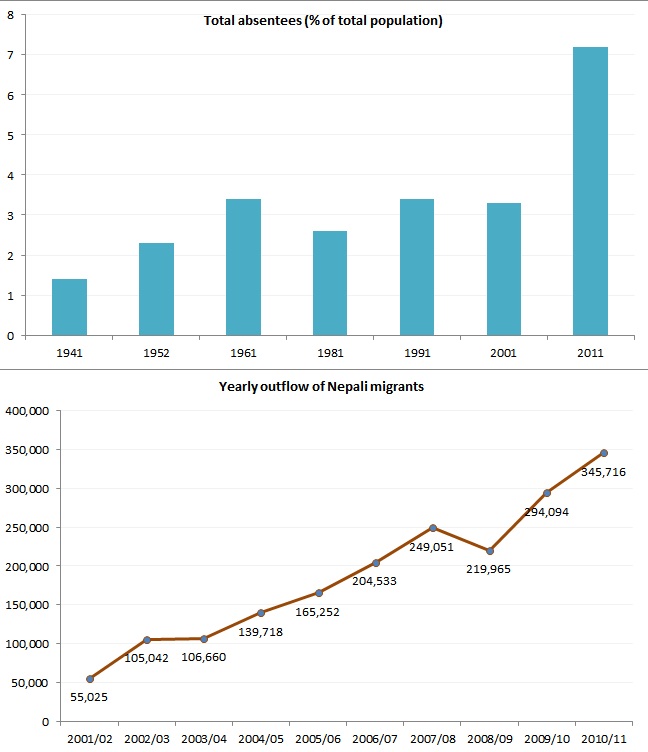 The figures are from census, CBS, DoFE, and the WB.

Trade and growth in Sub-Saharan Africa

Bruckner and Lederman argue that within-country variations in trade openness cause economic growth. Specifically, a 1 percentage point increase in the ratio of trade over GDP is associated with a short-run increase in growth of approximately 0.5 percent per year; the long-run effect is larger, reaching about 0.8 percent after ten years.

But, there are not only gains from open trade. While some gain, others lose. In 2010, a joint report (Benefits of Trade for Employment and Growth) by the OECD, the ILO, the WTO and the WB, stated that while open trade is always good, it must be complemented by properly designed domestic policies, including employment and social protection policies to ensure that benefits from trade are widely shared. While the crisis has limited growth in many countries, this should not be a reason to go for trade protectionist policies. Instead, trade should be kept open and it should be backed up by social security policies.

Meanwhile, there is also a growing body of literature that focuses on the level of sophistication of export products and its (positive) impact on per capita income. Anand, Mishra and Spatafora argue that “an educated workforce, external liberalization, and good information flows are important prerequisites for developing sophisticated goods and services”. Sophistication comes from either increasing the quality of currently produced goods or from a move into new and more sophisticated products. It induces structural transformation. The study finds that a one standard deviation increase in the sophistication of goods or services is associated with a, respectively, 0.6 or 0.4 percentage points increase in the average annual growth rate. See this blog post for more on the paper.

Posted by Chandan Sapkota at 11:59 AM No comments:

Study on exports of Nepalese tea and lentil

Here are the PowerPoint slides of a study based on training manual prepared by SAWTEE (yours truly as well was heavily involved in preparing the manual). It  was on international trading system. Researchers from the government ministries and SAWTEE used relevant stuff from the training manual and training program based on the manual. I will upload the manual when its available.

Here is news coverage of the event. See this one as well. 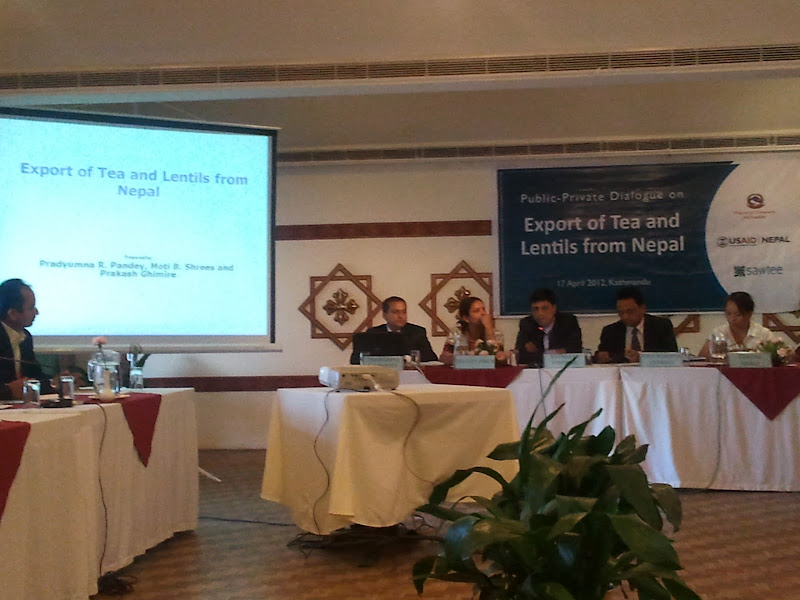