Preliminary estimates by MOSPI show that the Indian economy grew (y-o-y) by 6.1% in Q2 (July to September, when consumption is traditionally high due to festival season) FY2018 (2017/18) following five consecutive quarters of gross value added (GVA) slump reaching 5.7% in Q1 FY2018. Compared to GVA growth of 6.8% in Q2 FY2017, 6.1% GVA growth in Q2 FY2018 is still low but compared to the last quarter it is slightly higher. It shows that the lingering effects of demonetization is tapering off (but hasn’t gone off completely) and the uncertainty before the roll out of GST is gradually fading away, leading to marginal recovery of industrial activities (but again still not at the rate achieved in Q2 FY2017). Services activities have cooled off compared to last quarter as well as the consecutive quarter in FY2017. 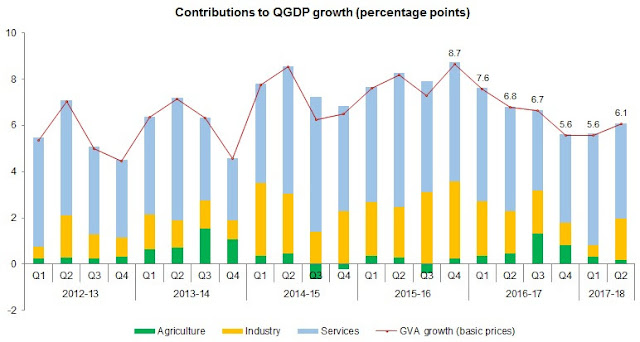 Specifically, agricultural output grew by 1.7%, which is higher than 2.3% in Q1 FY2018 but lower than 4.1% in Q2 FY2017. Production of Kharif crops (monsoon crops such as rice, millet, maize, sugarcane, soyabean, etc) was lower than expected as deficient and uneven pattern of south-west monsoon dented its growth to 2.8% compared to 10.7% growth in Q2 FY2017. Similarly, output related to livestock products, forestry and fisheries grew by a modest 3.8%.

Industrial output rebounded with 5.8% growth, significantly up from 1.6% in Q1 FY2018 but marginally lower than 5.9% in Q2 FY2017. Mining and quarrying activities accelerated by 5.5%, up from a decline of 1.3% in the corresponding period in FY2017, thanks to increase in production of coal, crude oil and mining. Meanwhile, manufacturing activities grew by 7% compared to a 7.7% growth in Q2 FY2017. Output growth of electricity, gas and water supply was 7.6%, up from 5.1% in the corresponding quarter in FY2017. Electricity output rebounded significantly. Construction activities grew by 2.6% compared to 4.3% growth in Q2 FY2017 as production of steel cement and consumption of finished steel slowed down when compared to the growth rate in Q2 FY2017. This shows that while the industrial sector is rebounding following the dent created by demonetization and uncertainty surrounding the roll out of GST, it still has not fully recovered to pre-shock rates.

Overall, it’s a story related to industrial rebound— particularly mining and quarrying and electricity and utilities. However, overall industrial output growth is still lower than in Q2 FY2017 as manufacturing and construction activities have not rebounded to pre-shock rates. Investment seems to be on an upward trajectory. 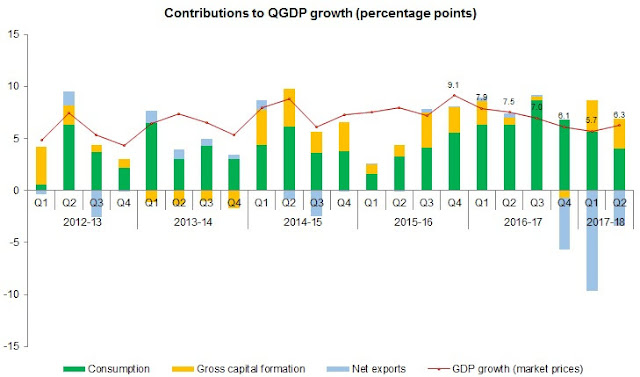 If you look at the QGDP figures from expenditure side, then you will see a strong rebound in fixed capital formation. Consumption grew by 6%, lower than Q1 FY2018 as well as Q2 FY2017, as both government and private consumption slowed down. Gross capital formation grew by 8.6%, higher than in Q2 FY2017 and in the last quarter. GFCF, change in stocks and valuables accumulation increased at a rate higher than in previous quarter and the corresponding quarter in FY2017. Net exports improved. Overall, GDP at market prices grew by 6.3% compared to 7.5% in Q2 FY2017 and 5.7% in Q1 FY2018.
Posted by Chandan Sapkota at 9:26 PM No comments: