Developing countries and the financial crisis

The developing countries face a financing gap of $270-$700 billion (that’s a pretty wide range!) due to the financial crisis, according to a new report by the WB. It argues that developing countries are likely to face higher spreads and lower capital flows than over the past seven years, leading to weaker investment and slower growth. The low income countries are still feeling the burnt of fuel and food crisis, which depleted international reserves. Then the ensuing global financial crisis led to lowering of commodity prices, especially primary goods- the main export items of LICs, leading to lowering of terms of trade. This is likely going to increase deficit. All the problems occurring at the same time or in sequence will put enormous pressure on fiscal stability.

One of the main worries for the developing countries is the decline in remittances, the life blood of small economies like Nepal which has more than a million citizens working abroad. Remittances contribute to approx 20% of GDP. Surprisingly, remittances inflows have been increasing until recently in Nepal. No one knows how long it will last until the crisis cripples remittances inflow. But, it is expected to decline soon. The World Bank estimates that remittances will nosedive in 2009 and will recover in 2010. 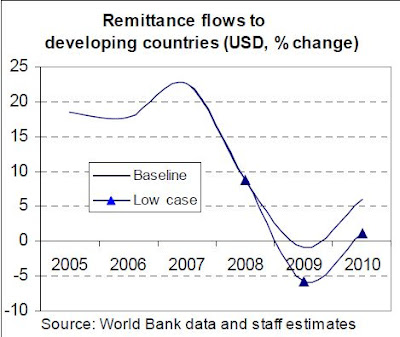 The paper said that 94 out of 116 developing countries have experienced a slowdown in economic growth. Of these countries, 43 have high levels of poverty. The most affected sectors are those that were the most dynamic, typically urban-based exporters, construction, mining, and manufacturing. Cambodia, for example, has lost 30,000 jobs in the garment industry, its only significant export industry. More 500,000 jobs have been lost in the last three months of 2008 in India, including in gems and jewelry, autos and textiles. The ILO predicts that global job losses could hit as much as 51 million people and affect 30 million workers.

The WB says that financial crisis will have long-term implications for developing countries. Debt issuance by high-income countries is set to increase dramatically, crowding out many developing country borrowers, both private and public.Developing countries that can still access financial markets face higher borrowing costs, and lower capital flows, leading to weaker investment and slower growth in the future.

In order to aid stimulation of developing economies, the WB has launched an Infrastructure Recovery and Assets (INFRA) program (among other programs), which, it says, will channel investment in infrastructure so that badly needed investment is not completely dry. This is a form of fiscal stimulus ($15 billion) in the developing countries.

For instance, the most binding constraint on growth in the Nepali economy is bad infrastructure. You don’t need a sophisticated analysis to realize that it is the most binding constraint on growth (actually, I tried it myself in a recent paper!). People know that there is deficient supply of infrastructure and markets and production sites are not linked. Still, the development agencies did not invest on this crucial sector that would have produced the biggest bang for a buck.

All of a sudden, there is a renewed vigor to pour in investment on infrastructure sector in the developing countries. Everyone wants to ‘follow the herd’. Nothing wrong with this initiative but I think it is too late and too little to stimulate developing economies by focusing investment in infrastructure only. Widen social safety nets, free them of some of the harsh conditionality on lending so that countries can use funds in the sectors that they think are going to be affected the most, provide them expertise (not command the actions) on prudent and productive investment, and so on.