Will Martin and Justin Lin argue that the financial crisis affected developing countries through higher interest rates, sharp changes in commodity prices, and decline in investment, collapse in trade, decrease in migration and reduction in remittances. On one hand due to declines in key food prices associated with the crisis, poverty reduced in low-income countries. On the other hand, declining trade, investment, and remittance flows had adverse impacts on the poor. To deal with reductions in aggregate demand, and the particular vulnerabilities of poor people, Martin and Lin argue that policies should focus on dealing with financial sector problems and set up better social safety net policies that can offset the adverse impacts of a wide range of different shocks on poor people without creating costly market distortions.

In short, the financial crisis resulted in declines in commodity prices, decline in migration (both between regions and between countries), reduction in remittance flows, increase in the cost of finance for production and trade (affecting both producers and consumers in poor countries), and a reduction in lending to developing countries. Decline in the demand for labor due to reductions in investment and in exports decreased employment and wages for unskilled labor in many poor countries. An increase in interest rates, particularly for trade credit, raised the costs of production and trade. The paper provides a very nice, compact review of how the financial crisis brewed and exploded, affecting pretty much everything that matters to the poor people. 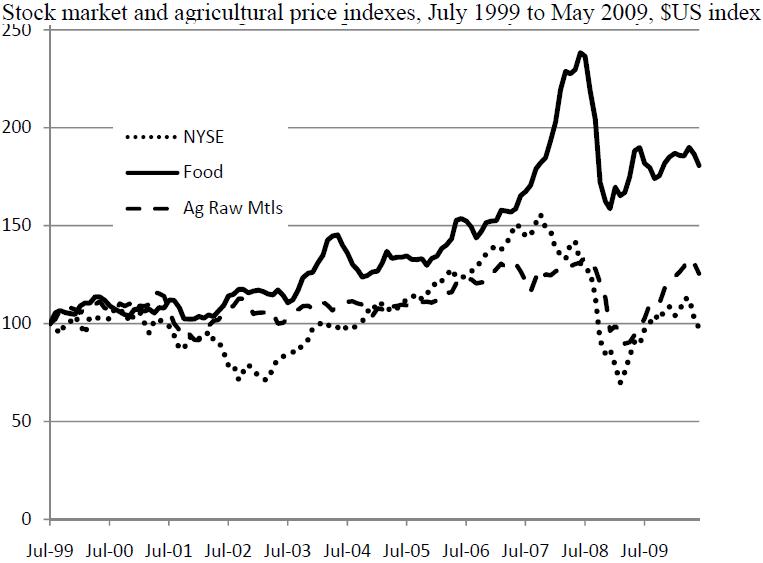 The figure presents the relationship between the New York Stock Exchange Composite index and the IMF composite indexes, in US$, for food and agricultural raw materials. Over much of the period considered, the three price indexes appear to have responded to some common determinants, with the price of raw materials being much more strongly correlated with the stock market index than is the food price. Two sections of the graph are of particular interest. The first is the period after the stock market decline from late 2001, and the second the rise, decline and subsequent partial recovery in all three prices after 2005. In the first period, it appears that the decline in stock market prices was associated with a rise in agricultural commodity prices. In the second period, the three series moved in similar directions, although the turning points in the food market were slightly different, and food prices rose considerably more than the other series in 2007-8, and remained higher afterwards.

Posted by Chandan Sapkota at 10:46 AM No comments: