Development impact of the Doha Round

There has been a lot of debate about the gains from the Doha Round. It was initially estimated that the developing countries would gain tremendously and would help them not only achieve development goals (especially poverty reduction) but also bridge the income gap with the developed world. However, the exact benefit of Doha Round is still debatable. Generally, analysts use models (like CGE) and simulate the likely Doha scenarios (the likely framework that would be agreed upon) to estimate the impact of policy changes in the future as against the situation in the base year. Integrating the service sector in the modeling is a daunting task and is highly speculative as there are not convincing models to move in that direction yet.

In 2005, a World Bank study put a bombshell on the overly optimistic estimations from gains from trade. The study showed that under the "likely Doha scenario", the global gains in the year 2015 would be just $96 billion, with only $16 billion going to the developing world. This means the developing countries would see a one-time increase in income of just 0.16 percent of GDP. Also, it showed that only 6.2 million people would be lifted above the $2 per day poverty line (it represents just 0.3 percent of those living in poverty worldwide). Worse, most of these gains would go to the developed world and those that goes to the developing world is largely distributed among few countries. Half of all the benefits are expected to flow to just eight countries: Argentina, Brazil, China, India, Mexico, Thailand, Turkey, and Vietnam. Furthermore, this study by Carnegie Endowment shows that total gains from trade to be between $32-55 billion, with rich nations getting $30 billion; middle income countries like China, Brazil and SA getting $20 billion; and poor countries getting $5 billion (about $2 per head). 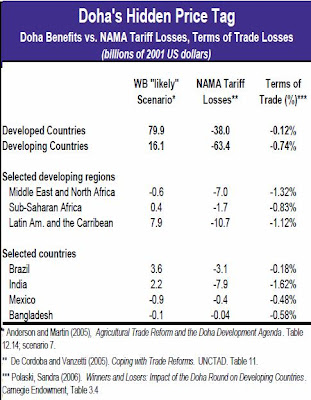 Amidst the increasing momentum on resuming Doha trade talks, a study by the Peterson Institute for International Economics (PIIE) has shown that the Doha deal could deliver $300-700 billion in global welfare gains, with the benefits 'well-balanced' between the developing countries. In a new policy brief, Kevin Gallagher and Tim Wise argue that these assertions rest on "shaky assumptions, controversial economic modeling, misleading representations of the benefits, and disregard for the high costs of Doha-style liberalization for many developing countries." They wonder how the economists found another  $150-$350 billion in benefits for developing countries that the World Bank missed in 2005.

The gains in the new study from agriculture and non-agricultural market access (NAMA) are of the same order of magnitude as previous studies, about $100 billion, with the vast majority going to rich countries.

The new estimates for services, sectorals, and trade facilitation are highly speculative, use methodologies that are unproven, and assume far more ambitious outcomes than seem at all likely at this point.

Peterson finds high gains in services and sectorals because they assume that developing countries will make big concessions and that those same countries are big winners (from lower prices) even if they lose significant parts of those sectors to imports.

The estimates of $365 billion in gains from trade facilitation are particularly exaggerated, because they assume not only agreement on reforms but resources for the vast investments in infrastructure and human capital needed to make them happen.

The claims of “balance” are unfounded, as developing countries receive less than one-third of the projected income gains. Previous modeling has shown that many poorer regions, such as Sub-Saharan Africa, are projected to be worse off after an agreement. 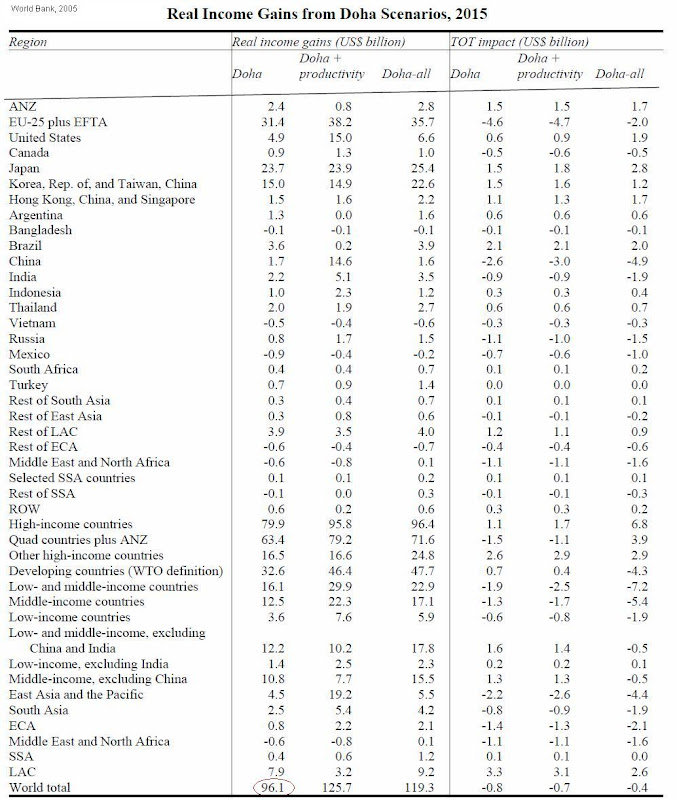