Notes and views on the major indicators as outlined in annual macroeconomic review 2009/10 of Nepal. A related excel file can be downloaded here. 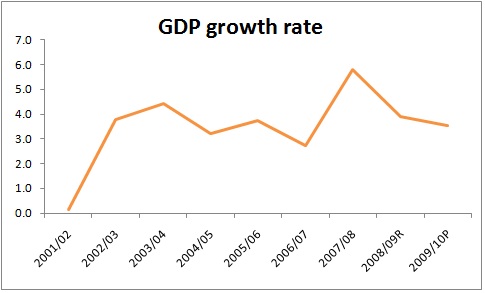 ● Budget deficit/GDP is 3.3% (3.5% last year). Looking just at the figure, this is good, but note that there is less budget deficit due to low development expenditure. It was financed mainly by the issuance of securities worth Rs 29.91 billion, which is 2.5% of GDP. External cash borrowing was Rs 4.278 billion and net domestic borrowing was Rs 28.15 billion. Total outstanding debt amounts to Rs 157.86 billion.

● Trade deficit expanded by 46.5% to Rs 317.67 billion (33.3% rise to Rs 216.77 billion last year). BOT with India rose by 46.5% as compared to 17% last year. BOT with other countries increased by 46.7% compared to a growth of 62% last year. This is alarming. We need to do something urgent and possibly implement miraculous policy to boost exports or curb imports of luxury items. The widening BOT is simply unsustainable in a nation where population growth rate is close to the GDP growth rate and consumption rate is just ten percentage points shy of total GDP. Period.

● FDI commitment of Rs 9.1 billion (171 joint venture projects approved by DoI as against 230 projects with Rs 6.3 billion approved last year). Sector-wise new joint ventures: 50 in tourism, 72 in services, 37 in manufacturing, 1 in construction, 2 in agriculture, 5 in energy, and 4 in mining. It is expected to provide 7848 jobs. Investment commitment from India is highest, followed by Mauritius, Canada, and China. A total of 34 countries are given approval for foreign investment in this period.

● Domestic credit expanded by 16.2% against last year’s expansion of 27.1%. Reasons: lower growth in private sector credit of the banking system.

Incomplete comments (I will expand on these and others issues related to the report in later blog posts): The growth rate of exports has continued to decline while imports are surging, leading to a wide balance of trade deficit. Decline in exports to India due to low exports of readymade garments, zinc sheet, GI pipe, pulses and plastic utensils, among others. Exports to other countries declined in pulses, woolen carpet, readymade garments, pashmina and herbs.

Imports from India are increasing at a high rate. Major import products from India are petroleum, vehicle and spare parts, MS billet, chemical fertilizers, MS wire and rods, among others. These are moderately essential items in various sectors. So, do not expect the demand for these items to decline. In other words, given present trend, imports from India will continue to grow. From other countries, Nepalese consumers imported gold, telecommunication equipment and parts, polythene granules, silver and steel rod and sheet, among others. With exception to the import demand for gold, expect imports of other items from other countries to increase as well, unless the government curbs imports with high tariff.

The ratio of exports to imports is 16.1 (23.8 last year). As said earlier, this is simply unsustainable. We gotta do something about it. Blanket import-substitution policies are definitely not the way. Export promotion policies and encouraging consumption of domestically produced goods and services, wherever feasible, might be worth experimenting.

A rise in capital account surplus with a rise in trade credit liabilities led to narrowing down of overall BOP deficit. Generally, current account deficit matters in the overall BOP picture. We still have a huge current account deficit. So there should not be any respite that BOP deficit has narrowed down. Capital account reflects net change in national ownership of assets. Current account shows a nation’s net income, which matters for growth instead of capital account. A current account surplus increases a country's net foreign assets by the corresponding amount, and a current account deficit does the reverse. Interesting side note: When the news about BOP deficit of around Rs 20 billion was revealed in the first quarter, I had argued that this might narrow down when the full annual figure comes out. There was a huge concern that was, I think, overly blown up. Don’t get me wrong. BOP deficit has to be addressed, whatever small the deficit amount is. I was just saying that we need to wait for the overall yearly figure before stretching eyebrows to the max. Even the Economic Survey 2009/10 projected a BOP deficit of Rs 19.57 billion.

The World Economic Forum has published The Global Competitiveness Index 2010-2011. This year Switzerland is the most competitive nation. Among 139 countries, Nepal ranks 130th in terms of competitiveness with a score of 3.34 (7 being the highest; Switzerland has a score of 5.63). Last year, Nepal ranked 125th, which means that the economy's competitiveness declined by five positions. Look at the South Asian countries, India ranks 51th (two positions down from last year); Bangladesh ranks 107th (one position down); Pakistan ranks 123th (twenty-two positions down); and Sri Lanka ranks 62nd (17 positions up).

The Nordic countries continue to be well positioned in the ranking, with Sweden, Finland (7th) and Denmark (9th) among the top 10, and with Norway at 14th. Sweden overtakes the US and Singapore this year to be placed 2nd overall. The United Kingdom, after falling in the rankings over recent years, moves back up by one place to 12th position. The United States falls two places to fourth position, overtaken by Sweden (2nd) and Singapore (3rd), after already ceding the top place to Switzerland last year. In addition to the macroeconomic imbalances that have been building up over time, there has been a weakening of the United States’ public and private institutions, as well as lingering concerns about the state of its financial markets.

The People’s Republic of China (27th) continues to lead the way among large developing economies, improving by two more places this year, and solidifying its place among the top 30. Among the three other BRIC economies, Brazil (58th), India (51st) and Russia (63rd) remain stable. Several Asian economies perform strongly, with Japan (6th) and Hong Kong SAR (11th) also in the top 20. In Latin America, Chile (30th) is the highest ranked country, followed by Panama (53rd) Costa Rica (56th) and Brazil.

In sub-Saharan Africa, South Africa (54th) and Mauritius (55th) feature in the top half of the rankings, followed by second-tier best regional performers Namibia (74th), Botswana (76th) and Rwanda (80th).

Here is how Nepal fared in the twelve pillars of GCI:

Though Nepal is still a factor-driven economy, a typical feature among developing countries, its macroeconomic management and health and primary education standards are higher than its peers. 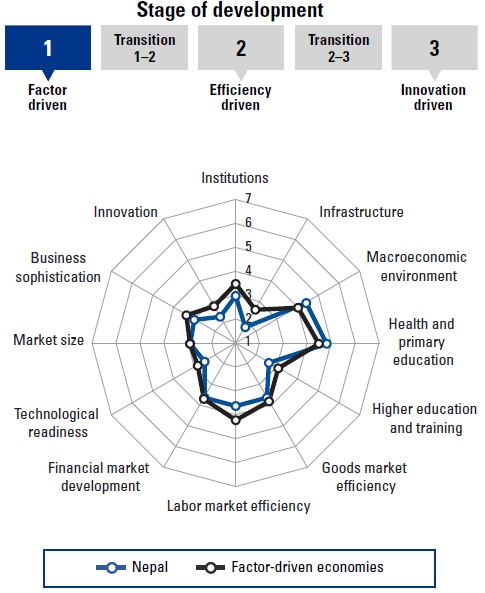 Government instability/coups, corruption, and policy instability are identified as the three most problematic factors for doing business in Nepal. These are followed by inefficient government bureaucracy, inadequate supply of infrastructure, restrictive labor regulations, and poor work ethic in national labor force. Interestingly, tax regulations and tax rates are the least problematic factors for doing business in Nepal. It means that the biggest constraint is political. 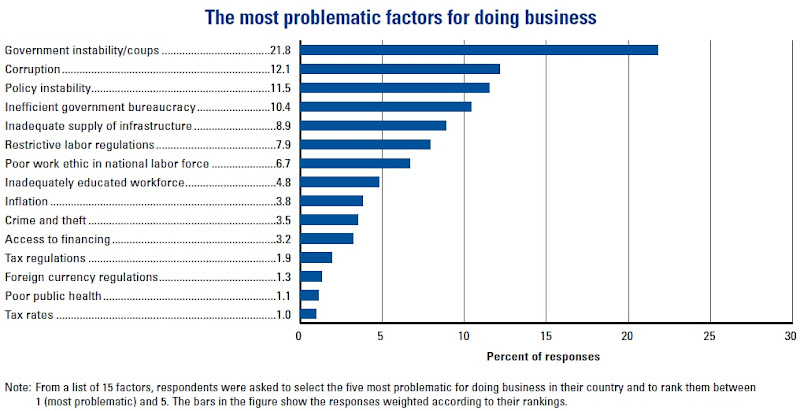 Posted by Chandan Sapkota at 10:43 PM No comments:

Moser and Urban argue that exports contributes to wage inequality among workers with different levels of skill, but diminishes wage gaps in manufacturing sector between men and women. This result cannot be generalized as their study is based on data from Germany only.

While the use of four constructed skill categories simplifies the presentation of our results, we find very similar results when estimating the export wage premium or discount across 340 occupations defined in the data set.

[...]Another set of results presented in our research shows that an increase in exports diminishes manufacturing wage gaps due to gender or nationality. Higher-skilled women, who are paid less than men with comparable personal characteristics in comparable plants, enjoy a higher export wage premium than men, and there is no evidence of an export wage discount for medium-skilled and lower-skilled women. Likewise, higher-skilled manufacturing workers who are not German citizens enjoy an export wage premium and there is not a significant export wage discount for these workers either.

Posted by Chandan Sapkota at 4:27 PM No comments: