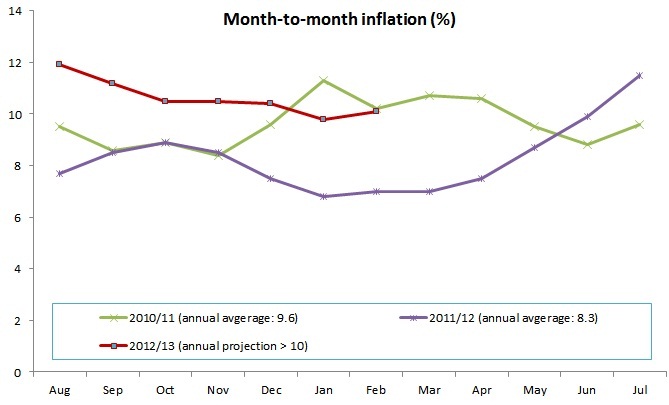 The figure shows the monthly change in inflation, which is an aggregate measure of the change in prices of goods and services, in the last three years and the first seven months of FY2013 (ending 15 July 2013). The inflation in a month of a particular fiscal year is the change in prices in that month compared to the prices in corresponding month in the preceding year. In other words, inflation of 10.1% in mid-August of FY2010 means that on average prices of goods and services have increased by 10.1% compared to the prices in mid-August of FY2009. The most widely yearly inflation data is computed by taking the average of monthly inflation in a fiscal year (in the figure, it is mentioned as annual average in the legend). The Nepal Rastra Bank gives 46.82% weight to food prices and 53.18% to non-food and services prices while determining overall inflation.

The figure shows that inflation in the first five months of this fiscal year has been consistently higher, though in a decreasing trend, than the levels reached in corresponding months of previous years. Compared to previous year, it essentially means that households have been paying higher prices, in general, for all goods and services purchased this year. High inflation is eroding household’s, whose income hasn’t kept pace with the inflation rate, purchasing power and is especially hitting poorer households hard. With the government’s failure to clamp down on inflation, which is hovering above 8% since 2008/09, people have built up expectations that prices will not come down in the near future (or say embedded expectations at a higher base). Unfortunately, we are living in times where inflation above 8% is becoming a ‘new inflationary normal’. Just for comparison, inflation was as low as 2.9% in 2000/01.

Traditionally, high inflation has its roots on too much money chasing too few goods, i.e. when the demand for goods (backed by too much money in hands of people) outstrips supply of goods. The central bank controls the flow of money (by changing interest rates and imposing regulatory restrictions) in the economy. However, given the pegged exchange rate with India, Nepal Rastra Bank’s monetary policies have little traction on inflation in Nepal. Alternatively, an irresponsible government with a knack for higher spending also pushes prices higher (or rather helps keep prices high).

Now, the question is: what really is pushing prices higher? Several factors come into play here. The very fact that our currency is pegged to Indian rupee and over 60% of trade occurs with India means that the inflation in India will naturally affect prices here. Research shows that about one-third of the price variability in Nepal is determined by prices in India. The rest is determined by domestic factors, including prices of administered petroleum fuel. 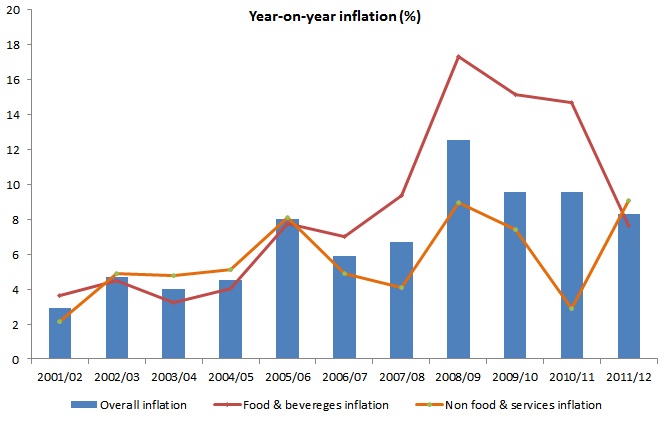 First, inflationary expectations are embedded in people’s consumption behavior due to the incompetency of government to control rising prices. Wholesalers and retailers deliberately jack up prices, irrespective of market supply and demand, each year during festival season (Dashain and Tihar) and the prices hardly come down after the end of festivals. This behavior is also apparent immediately after bandas and temporarily disrupted distribution of essential items.

Second, middlemen are distorting prices and deliberately keeping them high. For instance, transportation cost and some leakages do not fully justify more than 50% increase in prices of fruits and vegetables after they reach Kalimati from Dharke of Dhading. Powerful politically affiliated middlemen and associations act both as monopsonists (only they purchase food from farmers), and monopolists (only they sell food to wholesalers), in effect depriving farmers of the true price by stifling competition and also burdening consumers with artificially inflated prices.

Third, the frequent hike in administered fuel prices, high transportation costs, and long load-shedding hours have increased cost of production, which is ultimately reflected in retail prices. It affects costs at production site, distribution chains, and retail stores. Fourth, the continually rising imports of goods, especially those from outside of India, and the depreciation of the Nepali rupee have further pushed up prices as non-food and services have more weight in determining overall inflation.

All of this shows the failure of government leadership to lower inflation and make people’s lives easier. The ineffective market monitoring against anti-competitive practices, control of supply chains and market distortions, and to some extent a rise in cost of production are associated with government leadership and governance structure in practice. Recently, we have had leaders favoring high budget spending (unproductive ones) and cash handouts along with lax market monitoring because the supplies (ranging from construction materials to food items) are essentially controlled by party associates, who rake in huge commission by distorting market incentives. At some point controlling inflation becomes a political economy issue rather than a pure economic issue in developing countries like Nepal due to political, institutional and regulatory weaknesses along with immature linkages between and within sectors.

In effect, Nepali economy is destined to have high inflation, and with it people’s lives will get harder each year. Unless the market distortions are dismantled, unproductive spending are checked, and a sound macroeconomic framework (that doesn’t depend on remittances for sustenance) is created, we will continue to have a high inflationary normal, i.e. high inflation will be a new normal and people will experience continued erosion of purchasing power.