Rainfall and the probability of conflict

Antonio Ciccone argues that a 5% income shock (say by drought) raises the likelihood of civil conflict by 15 percentage points.

This is consistent with Fisman and Miguel’s argument that in Africa an income drop of 5% increases the risk of civil conflict in the following year to nearly 30%.

However, Simeon Djankov and Marta Reynal-Querol disagree by arguing that poverty does not have an effect on civil wars.

In Nepal, during the Maoists rebellion (1996-2006), the GDP growth rate averaged 4.1% which is barely different from the average growth rate of one decade before. However, head count poverty rate declined by more than 11 percentage points. This means that conflict did not substantially affect GDP growth rate. This can be explained by the rise in remittances inflow, even during peak time of conflict. This means declining poverty did not affect the likelihood of conflict in Nepal during 1996-2006. The effect of remittances far outweighed the negative effect of conflict on poverty and growth (though growth rate did plunged to –0.1% in 2001). 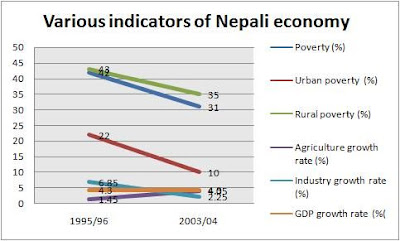 The figure below shows the increase in remittances: 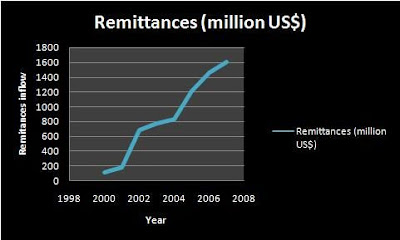 Posted by Chandan Sapkota at 4:59 AM No comments:

Financial crisis in one package

Global financial crisis 2008: All the discussions and links summarized here

Posted by Chandan Sapkota at 2:30 AM No comments: