Although inflation (year-over-year average CPI) moderated in FY2014 compared to 9.9% in FY2013, it still remained elevated at 9.1% as the effect of the substantial moderation in non-food prices was partly neutralized by the sustained rise in food prices. Food and non-food prices increased by 11.6% and 6.8%, respectively. They increased by 9.7% and 10.1%, respectively in FY2013. Overall, while food prices contributed to 5.4 percentage points to overall inflation, non-food prices contributed 3.6 percentage points in FY2014 (Table 2). Despite the good agricultural harvest and moderating prices in India, the high food prices, which have a 53.2% weight in the overall CPI index, indicate domestic distortions in the food distribution system, and the high fuel prices and transport cost transmitted to wholesale and retail prices. The price of cereals and grains, vegetables, meat and fish, and fruits increased by over 10%, and together they contributed 4.1 percentage points to the overall inflation, and almost 76% of food inflation. The subsiding of non-food prices reflect the gradual strengthening of Nepalese rupee, despite it still being weaker than a few years back, as it closely follows the currency movement of Indian rupee vis-à-vis the dollar.

Inflation has remained elevated due to a combination of structural bottlenecks, domestic supply-side factors, high inflationary expectations, and exogenous pressures such as the ongoing weakness of the currency despite some strengthening in the latter part of the year. Structural bottlenecks include weak backward and forward linkages, fragmented value chain and distribution systems, low productivity and policy inconsistencies. Supply-side constraints include the lack of adequate supply of electricity, transport bottlenecks, lack of raw materials leading to high import content of processed and light manufactured goods, and the inadequate supply of key inputs to boost productivity. Credible strategies to tame elevated inflation would help dampen inflationary expectations.

Inflation gradually increased from 7.9% in mid-August 2013, reached a high of 10.3% in mid-December, and then started to moderate, reaching 8.1% in the last month of FY2014. Compared to the prices in the corresponding months in FY2013, inflation was lower in all months except the last three months in FY2014 (Figure 21). Similarly, compared to prices in FY2013, food and beverage prices remained higher for all months except mid-August and mid-September (Figure 22). Non-food and services prices moderated in all the months compared to the level in corresponding months in FY2013 (Figure 23). 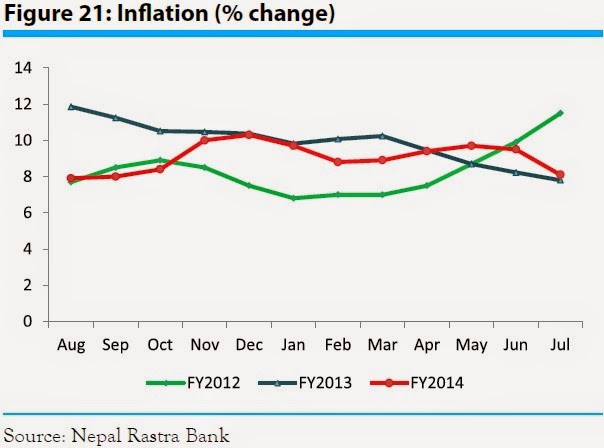 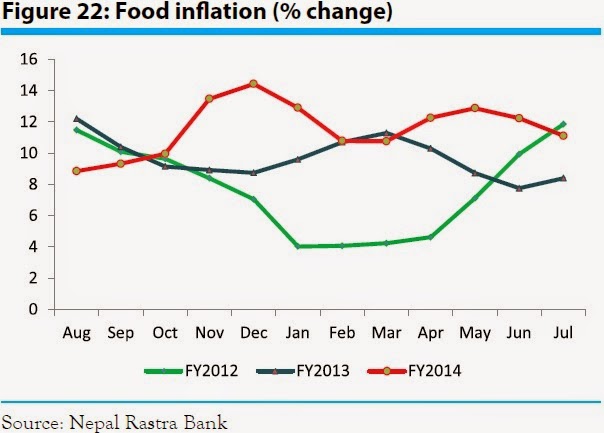 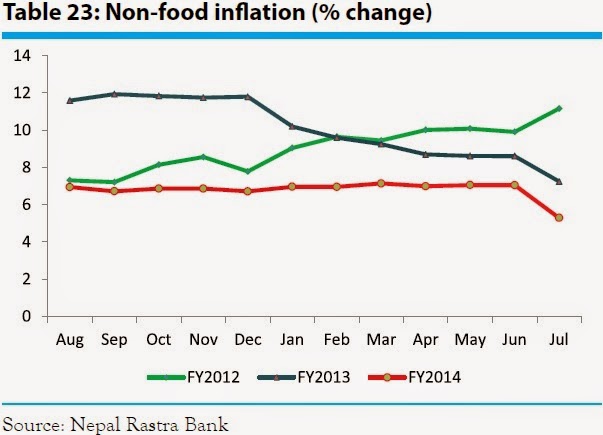 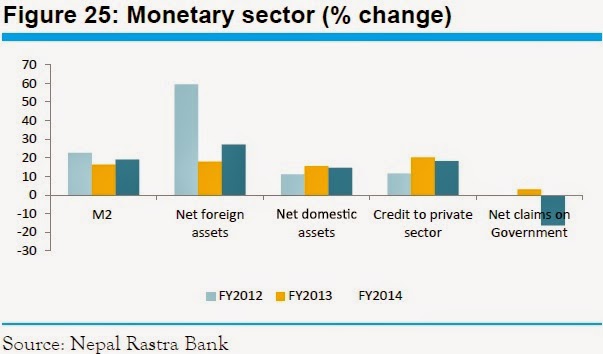 Net claims on government[3] — direct loans and government securities held by the central bank— decreased by 16.4% (NRs27.5 billion) from an increase of 3% in FY2013, reflecting the large increase in government deposits compared to the bank and financial institutions’ (BFIs) claims on the government. The overall credit to the private sector slowed down, registering a growth of 18.3% compared to 20.2% growth in the previous year. It indicates the lack of immediate bankable investment opportunities despite the declining lending rates offering by BFIs, which have had excess liquidity for over a year. As a share of GDP, total credit to the private sector stood at 7.3% in FY2014, down from 9.9% in FY2013.

The BFIs mobilized NRs218.7 billion (reaching a total of NRs1406.8 billion) in deposits in FY2014, higher than the NRs176.3 billion mobilized in FY2013, as higher remittance inflows and the acceleration of government spending in the last quarter of FY2014 boosted deposits. This translates into a growth of 18.4%, higher than 17.4% growth in FY2013. Deposit mobilization of commercial banks, development banks and finance companies increased by 17.8%, 29.1% and 5.7%, respectively (Figure 26). The cumulative deposit mobilization reached 72.9% of GDP in FY2014. 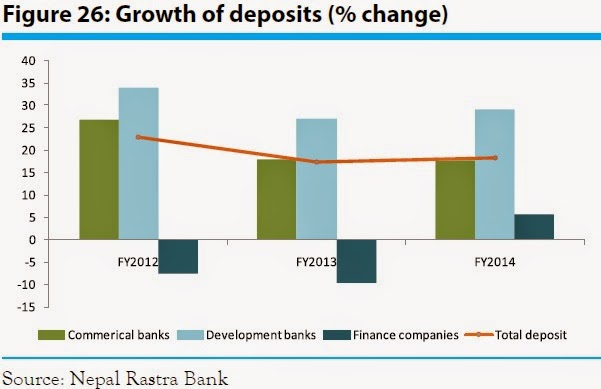 Total credit (loans and advances) of BFIs increased by 14.4% (NRs165.5 billion) in FY2014, down from 18.6% growth in FY2013 (NRs180.2 billion). Credits of commercial banks grew by 13.7% (NRs128.8 billion), down from a rate of 19.1% in FY2013. Similarly, credits of development banks and finance companies grew by 27% (NRs47.4 billion) and 4.3% (NRs3.9 billion), respectively (Figure 27). Credit to the private sector (by category A, B and C BFIs) increased by 18.7% (NRs176.1 billion), down from 20.8% growth rate (NRs162 billion) in FY2013, with commercial banks and development banks registering growth of 18.7% and 29.3%, respectively. Credit to private sector from finance companies declined by 2.1%. Despite the positive political outlook and declining lending rates, the growth rate of credit to the private sector fell due to the low demand emanating from the lack of immediate bankable investment projects and the cap on lending to certain sectors (particularly the property market) that had seen bubbles in the previous years. Cumulatively, 21.6% of the total lending went to wholesale and retail traders, followed by 19.6% to industry, 10.5% to construction, and 8.0% to finance, insurance and fixed assets (Figure 28). The total credit of BFIs reached 68.1% of GDP in FY2014. 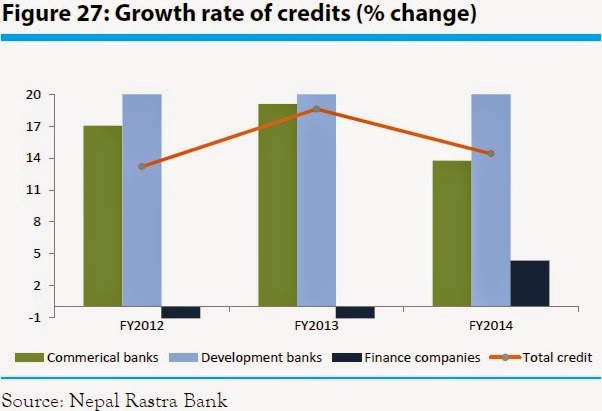 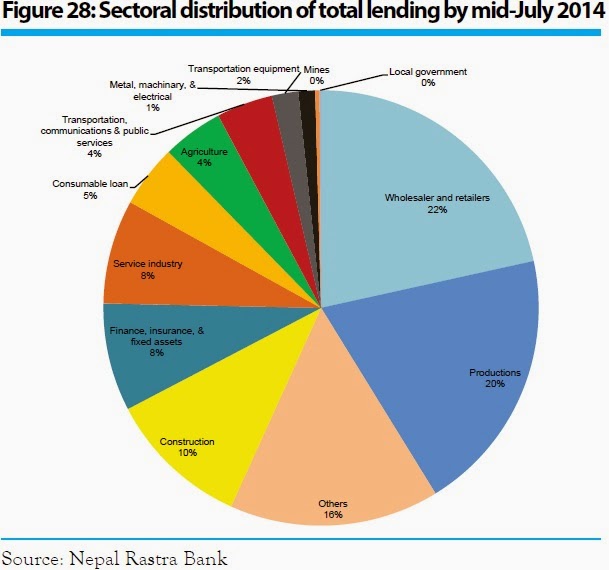 On a sectoral basis, 25.8% of the increase in credit by BFIs was absorbed by wholesale and retail traders (NRs25.8 billion), followed by industry (NRs18.1 billion), construction (NRs13.2 billion), services (NRs15.8 billion), and agriculture (NRs11.1 billion) (Figure 29). While lending to construction sector is recovering after it hit a low in FY2011, lending to real estate has declined for two consecutive years (Figure 30) — reflecting the pickup in residential housing and infrastructure related activities, but a slowdown in real estate market. 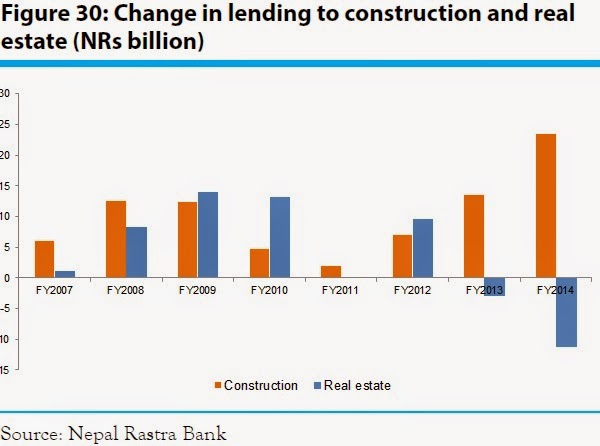 To finance burgeoning imports from India, the NRB sold $3.14 billion in the Indian money market and purchased Indian currency equivalent to NRs308 billion. In FY2013, the NRB sold $3.12 billion to purchase Indian currency equivalent to NRs277.4 billion. The central bank also injected NRs343.5 billion into the banking sector by purchasing $3.52 from the commercial banks.

The excess liquidity, which peaked to NRs70 billion in No 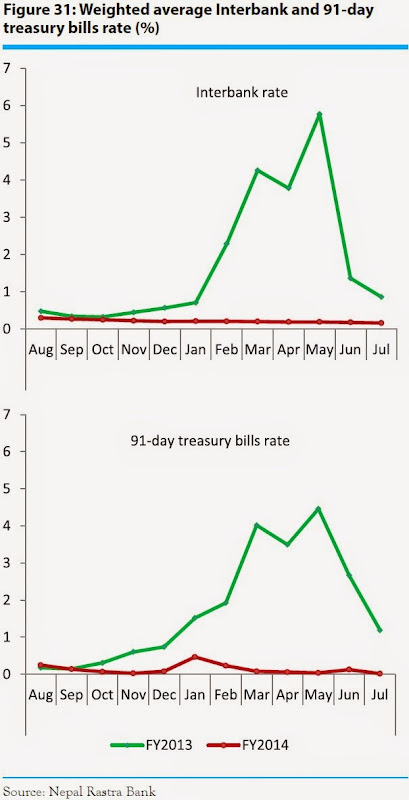 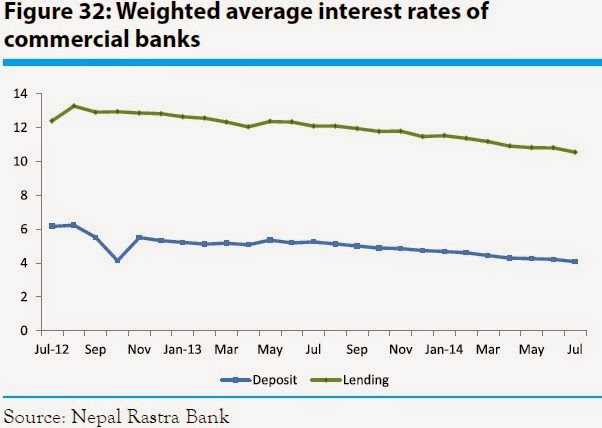 The increasing investor confidence following the successful second CA elections in November 2013, lower deposit rates and excess liquidity in the banking sector significantly boosted stock market turnover, which peaked to NRs77.3 billion in FY2014 from NRs22 billion in FY2013 (Figure 33). The commercial bank’s share in total turnover was 65% (NRs37 billion). A higher share turnover indicates more liquid shares of a listed company. Note that Nepal’s share market is still developing and it does not always respond meaningfully to policy change and political developments. 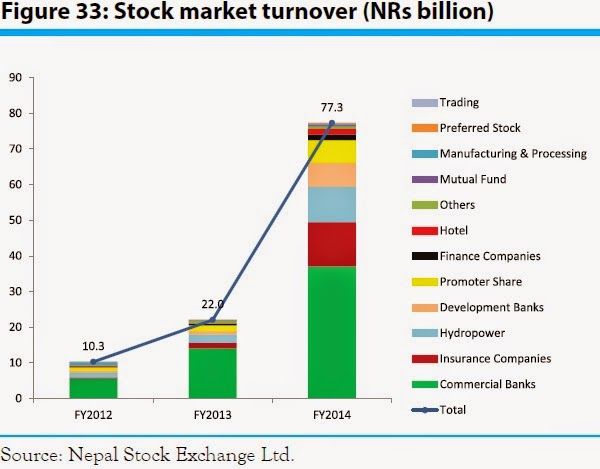 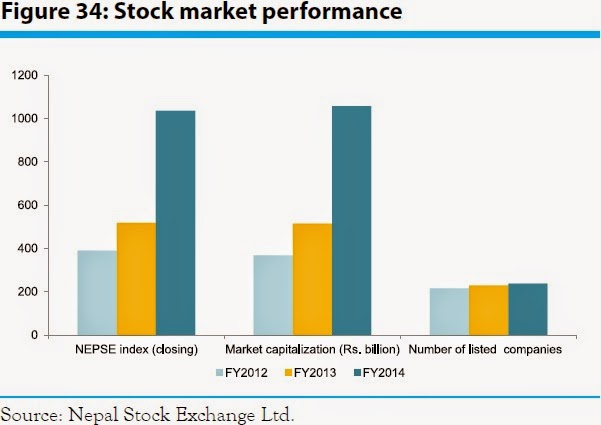 [1] Money supply (M2) is the sum of net foreign assets and net domestic assets. Also called broad money, M2 is equal to narrow money (M1,) and saving and time deposits. M1 is equal to currency in circulation and demand deposits.

Posted by Chandan Sapkota at 10:57 AM No comments: