1. The outlook for FY2016 is cautiously optimistic and is largely contingent upon the scope and pace of post-earthquake reconstruction works. The weak and subnormal monsoon so far has already affected agricultural plantation, particularly paddy in the eastern and central administrative regions. The loss of agricultural land to earthquake-triggered landslides will also lower potential agricultural output. Although the overall monsoon rains are expected to be better than last year’s, it is still projected to be below the long-term average as weak El Nino continues to prevail over the Pacific.[1] Furthermore, monsoon rains were late by around two weeks. Normally monsoon rains enter on June 10 from the eastern region, and gradually cover the entire country within a week. Approximately, 80% of total rainfall occurs between June and September. Industrial and services sectors are expected to register modest to robust performance depending on the political development, reconstruction efforts, recovery of earthquake-hit factor and product markets, and remittance inflows. The promulgation of a new constitution within FY2016 by settling most of the contentious issues may boost investor confidence. Furthermore, the scope and pace of acceleration of reconstruction projects will affect performance of quarrying, manufacturing and construction activities, which in turn will then dictate industrial sector growth. Timely and judicious execution of the FY2016 budget remains at the core the recovery process. The rate of migration to overseas employment destinations and the subsequent levels of remittance inflows, and the pace of full restoration and resumption of services activities such as hotels and restaurants, transport and communications, education and real estate and renting will influence services sector growth. 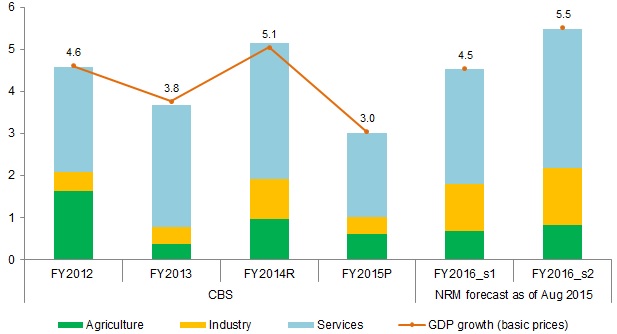 3. These estimates are lower than the government’s target of 6% as announced in FY2016 budget speech. In order to attain a 6% growth rate, assuming agricultural output growth of 2.5% considering the subnormal monsoon in the first half of FY2016, the non-agricultural output has to growth by at least 7.7%, which is 4.1 percentage points higher than in FY2015. Furthermore, assuming agricultural output equal to the average over the last five years and services output growth of 6% (which is higher than the average over the last five years), industrial output has to growth by at least 13.6% to attain GDP growth of 6%. This may be challenging given that industrial production is yet to recover fully to pre-earthquake levels due to production and supply disruptions caused by the earthquake and the political unrest in various parts of the country. Furthermore, the NRA is yet to be fully operation and it will take few months for the authority to firm up reconstruction project, and the line ministries have not proactively prepared investment plan and project strategy to execute the $170 million allocated to them for reconstruction related projects.

4. The expected low agriculture harvest due to subnormal monsoon, slightly higher price pressures in India, higher demand for reconstruction materials and workers, blockage of major trading routes with the PRC, and supply disruptions, including in distribution networks, as a result of the political strikes in various parts of the country will likely push up general prices of goods and services in FY2016 (Figure 2). Depending on the intensity of these factors, inflation is forecast considering two scenarios. Under the first scenario, although non-food prices are expected to remain low as a result of continued lower fuel prices and stable price pressures in India, food inflation is projected to remain in double digit, resulting in overall inflation of 8.5%. 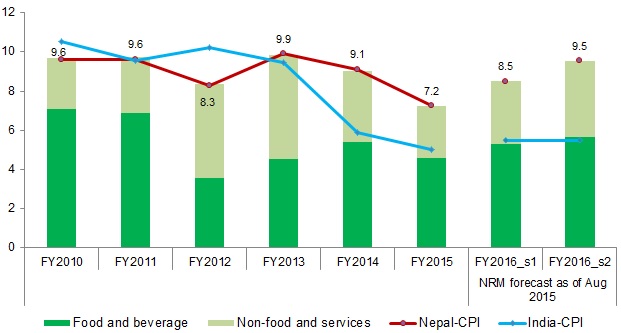 5. Under the second scenario, moderate price pressures in India, and higher intensity of supply disruptions caused by political strikes and blocking of major trading and distribution networks would push up food prices even higher than the one considered under the first scenario, especially that of cereals, legumes, vegetables and fruits. Similarly, non-food prices will likely escalate, particularly that of clothing and footwear, and furnishing and household equipment. These factors will likely push up inflation to about 9.5% in FY2016. Even after accounting for the high probability of subdued fuel prices throughout FY2016, if supply disruptions persist for long, then there is a high likelihood of even higher inflation, probably around 10%. Continued depreciation of Nepalese rupee against the US dollar will likely fuel inflationary pressures.

[1] Indian Meteorological Department’s assessment as of 3 August 2015. The monsoon seasonal rainfall is projected to be about 84% (August to September), 90% (August) and 88% (June to September) of the long period average . Long period average refers to the 50 year average. See: http://imd.gov.in/section/nhac/dynamic/LRF_second.pdf

Posted by Chandan Sapkota at 10:52 AM No comments: